IndyCar's Karam, Daly eager to prove themselves at Iowa 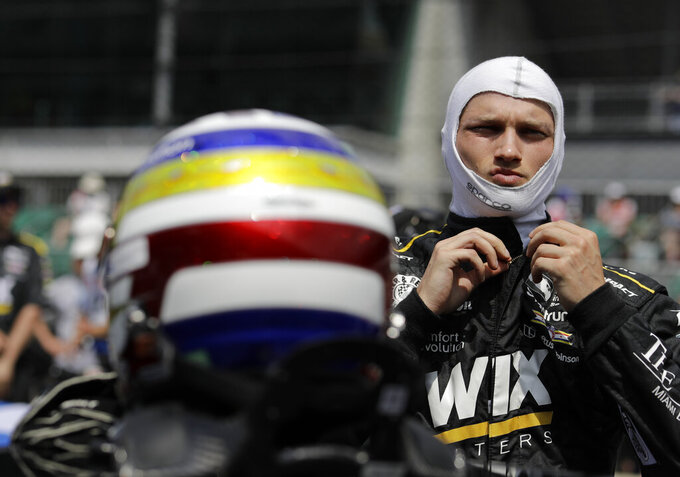 FILE - In this May 20, 2018, file photo, Sage Karam prepares for qualifications for the IndyCar Indianapolis 500 auto race at Indianapolis Motor Speedway in Indianapolis. At just 20, Karam had already landed his dream gig; a seat in the powerhouse Chip Ganassi Racing’s IndyCar program. Four years later, Karam is hoping to prove that he deserves another shot at a full-time seat in the series. (AP Photo/Darron Cummings, File)

Four years later, Karam is hoping to prove that he deserves another shot at a full-time seat in the series.

Karam and fellow American Conor Daly will fill in for Saturday's race at Iowa Speedway for Carlin, a British-based team that joined IndyCar in 2018 after three years in Indy Lights, the series' feeder circuit.

Karam, who had only raced at the Indianapolis 500 after starting 12 races for CGR in 2015, linked up with Carlin for last week's race in Toronto. Despite finishing 21st, the team decided to give it another go on Iowa's short oval — which is arguably Karam's best track.

Karam won four times in ladder series starts in Newton, and he finished a career-high third in the IndyCar race four years ago.

"It's been a long wait," Karam said. "If I'm looking at both of those races on paper and if I had to choose one...it'd definitely be at Iowa (over Toronto). Just because I've been staying active on ovals, and I've historically run pretty decent here."

Karam won the Indy Lights title in 2013 and followed that up by finishing ninth — after qualifying 31st — at the Indianapolis 500 a year later.

That led to a deal with Ganassi for 2015. But Karam just didn't put up the results.

Karam's podium finish in Newton was his only one that season. He did end up fifth at Fontana, but beyond that Karam finished 10th or worse in 10 starts.

Karam has had plenty of time to hash over what went wrong in 2015, and he believes he's grown in the four years since then.

"If you ask anybody, if they could go back in life and change things they've done or decisions they've made, I think everybody would say yes. Are there things I wish I did my rookie season that I didn't do? Absolutely," Karam said. "I've just gotten older, and I think with age comes maturity....four years is a long time, especially when you aren't driving."

Like Karam, Daly is eager to show that he's got what it takes to become a series regular again.

Daly ran a full season for Dale Coyne Racing in 2016 and for A.J. Foyt Racing a year later, but he finished on the podium just once in 33 starts.

Daly reminded the series of his talents when he finished 10th at the Indianapolis 500 for Andretti Autosport. Carlin picked him up for another oval race at Texas Motor Speedway a few weeks later, and he took a car that qualified 19th to an 11th-place finish.

Daly knows that he'll be charged with helping the fledgling Carlin team gather more oval data. But Daly is also hoping a strong performance might help him land a few more races before 2019 closes out.

"I think what it means is that what I did at Indy this year really did move the needle a little bit. Indy was a lot of fun for me. It went well," Daly said. "I was hoping that would do something, and it brought up my oval status a little bit more."