As Japan braces for typhoon, rugby squad trains in the rain 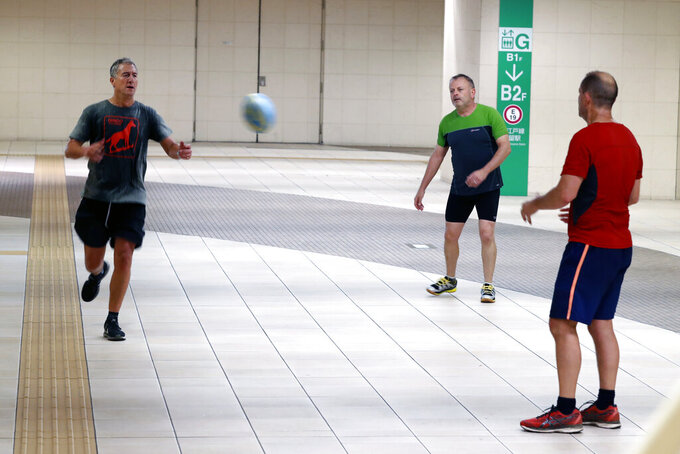 England rugby fans warm up with a rugby ball at an underground pathway in Tokyo Saturday, Oct. 12, 2019. A heavy downpour and strong winds pounded Tokyo and surrounding areas on Saturday as a powerful typhoon forecast as the worst in six decades approached landfall, with streets and train stations deserted and shops shuttered. (AP Photo/Eugene Hoshiko) 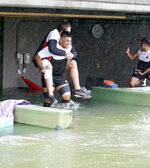 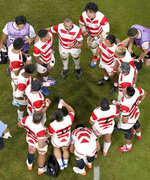 TOKYO (AP) — Emergency crews were on high alert. Flights and trains were cancelled. Rugby stars here for the World Cup mostly heeded the same warnings as everyone else as Japan braced to be hit by a typhoon tipped to be its worst in six decades.

Tokyo Disneyland was shut. Shops were closed, shelves empty in some places as people stockpiled provisions. Images of massive waves pounding into Japan's main island were all over the media. Formula One qualifying for the Japanese Grand Prix was postponed, and two Rugby World Cup games scheduled for Saturday had already been canceled.

And what was Michael Leitch and his Japan squad doing amid all this? Slogging through shin-deep water to get onto a sodden rugby field in downtown Tokyo to prepare for a game against Scotland that may not even be played on Sunday. It was hours before Typhoon Hagibis made landfall, and an earthquake in the area, but it was evidence of how this squad does things its own way.

"Discipline is crucial when the game gets tight," Leitch was quoted as saying by the national news agency.

They've certainly been disciplined. Japan won three games at the 2015 Rugby World Cup, including the epic upset of two-time champion South Africa, but still missed out on the quarterfinals. Despite the against-the-odds nature of that campaign, missing out on the knockout stage deeply hurt the players. Ultimately, it was a loss to Scotland that cost them.

Four years later, Japan has again won three games — including an upset of an Irish team that was ranked No. 1 before the tournament — and is a hot chance to become the first Asian team to qualify for the knockout stage of rugby's marquee tournament. It just happens to be being staged for the first time in Asia, albeit at the end of typhoon season.

Head coach Jamie Joseph pointed out on Friday, when he was riled by reports that Japan would get an easy ride to the knockouts if Sunday's game was cancelled and both teams were awarded two competition points, that his squad was just as desperate as Scotland to play. The typhoon isn't disrupted the whole country, with games and training sessions expected to go ahead as planned to the north and south of central Japan, but it was impacting life around the capital.

In the only one of Saturday's three scheduled games that wasn't cancelled, Ireland beat Samoa 47-5 at Fukuoka to secure one of the quarterfinal spots from Pool A. That means Scotland needs to beat Japan to advance.

The Japanese squad has been in camp for 240 days this year, Joseph noted, fully committed to the World Cup cause and making plenty of personal sacrifices for it. They want this.

Japan hasn't beaten Scotland in seven previous tests, and has conceded 17 tries while scoring just three against the Scots in three previous World Cup encounters. But those aren't stats that bother Joseph, considering some of the upsets Japan has caused.

The squad that some critics regarded as an assembly of rugby expats has certainly won the support of the host nation, probably because perseverance is a primary trait.

Joseph is a former New Zealand forward who played against Japan at the 1995 World Cup, and then switched to play for Japan in '99. And now he's coach.

Leitch was born in New Zealand, has Fijian heritage, but moved to Japan at age 15 and is playing in his third World Cup, his second as captain. He's teak tough, and a leader who exemplifies the team-first attitude. Players like halves partners Yutaka Nagare and Yu Tamura and winger Kenki Fukuoka have highlighted the increasing depth of the homegrown talent pool.

The Scots initially threatened legal action if the last of the pool games was canceled instead of moved or played in an empty stadium, but Joseph said his team wanted to play to finish off a perfect pool stage and prove beyond any doubt that they belong among the eight most elite teams.

Prop Keita Inagaki was in the Japan squad that lost to Scotland four years ago in England, and he carries that as motivation.

"I have never forgotten that feeling of defeat," Keita was quoted as saying by Kyodo. "We played two tests against them a year later and I still remember the pain from those, too."

Inagaki and Leitch are two of the seven players who started against Scotland in '15 and were included in the starting XV again for Sunday.

Nobody will question the commitment of this team, particularly after its captain's run when the typhoon was closing in from the Pacific.

World Rugby will assess conditions Sunday morning before confirming which of the last four group games will go ahead.