Jeff Gordon's influence on NASCAR honored at Hall of Fame 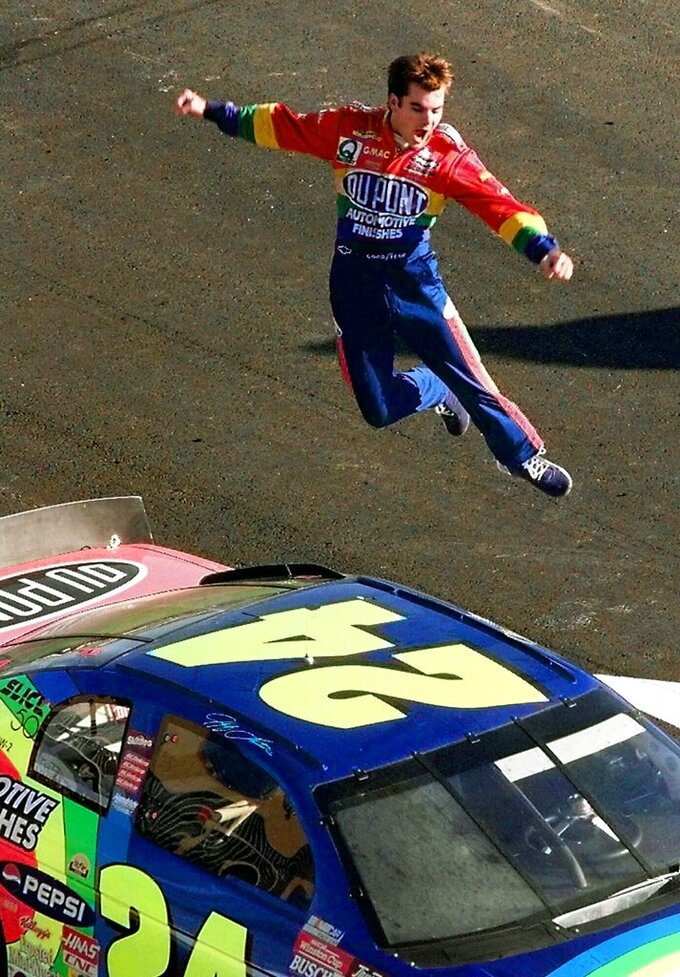 FILE - In this Nov. 16, 1997, file photo, driver Jeff Gordon, from Pittsboro, Ind., jumps completely in the air from the roof of his DuPont Chevrolet after winning the NASCAR Winston Cup Championship at the Atlanta Motor Speedway in Hampton, Ga. Gordon headlines the 10th class of the NASCAR Hall of Fame for his storied career on and off the track. He'll be inducted on Friday night, Feb. 1,2019, along with NASCAR team owners Roger Penske and Jack Roush. (AP Photo/John Bazemore, File) 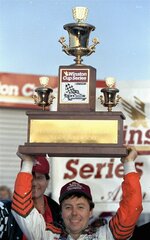 CHARLOTTE, N.C. (AP) — Jeff Gordon's immense influence on NASCAR was highlighted during a star-packed Hall of Fame induction ceremony befitting a driver who changed the trajectory of an entire sport.

Gordon was the top vote-getter in the 10th class of the Hall of Fame, which included the late drivers Davey Allison and Alan Kulwicki, as well as team owners Roger Penske and Jack Roush. Gordon received 96 percent of the vote, falling just short of the Hall of Fame's first unanimous selection, in his first year of eligibility.

This class was the first in which all five inductees competed against each other at the same time. Gordon made his Cup debut in the 1992 season finale, won by Kulwicki in part because Allison wrecked early. The stage was set for three new drivers to star in NASCAR and challenge Dale Earnhardt's long reign of NASCAR dominance.

The following year, a pair of aviation accidents in a span of 102 days altered NASCAR permanently.

Kulwicki died in an April 1 plane crash returning to Bristol Motor Speedway from a sponsor appearance. Allison died July 12 when he crashed the helicopter he was piloting in the infield at Talladega Superspeedway, where he'd gone with Red Farmer to watch Neil Bonnett's son test for his Busch Series debut.

Gordon had a quiet rookie year while Earnhardt went on to his sixth championship and added his seventh title the next season. Gordon eventually took Allison's role as Earnhardt's nemesis by dethroning him in 1995.

Gordon spoke at length of how good timing and lucky breaks aided his career, particularly when he was hired by Rick Hendrick to move to the Cup series in 1992.

"All the hard work, seizing the moment as often as possible in every good car I had a chance to drive, introducing myself to anyone I could, hoping and wishing that the right person or car owner saw enough in me to take a chance — and Rick Hendrick was that individual," Gordon said.

"I'm so fortunate to have driven the best cars built by the best people and owned by the best owner in NASCAR."

His induction into the Hall of Fame completes the famed No. 24 team as Hendrick and crew chief Ray Evernham are already members. Gordon was inducted by Hendrick, his daughter Ella and son Leo. He was introduced by Kyle Larson, who followed his childhood idol out of California through sprint cars into NASCAR.

"In the early 90s, a youthful Californian stormed onto the NASCAR scene," Larson said in his introduction. "His generational talent and charisma helped transform NASCAR from a regional sport to a national spectacle. Confident and flashy, he served as the perfect rival to the rugged Intimidator Dale Earnhardt. His name is found throughout NASCAR's record books and now is etched permanently in the NASCAR Hall of Fame."

Jim Hunter, NASCAR's former spokesman, was posthumously awarded the Landmark Award for contributions to the sport.

Kulwicki, who moved from Wisconsin to Charlotte in 1984 with a car he built himself towed by his pickup truck, was honored by fellow Wisconsin native Matt Kenseth and Felix Sabates, the executor of Kulwicki's estate.

Kulwicki was the reigning NASCAR champion at the time of his death — he beat Bill Elliott in the 1992 season finale by 10 points to win the title — and Sabates noted that Kulwicki spent $2.84 million on his championship season.

"Somewhere he's doing his trademark Polish victory lap because tonight he's a NASCAR Hall of Famer," Kenseth said of Kulwicki's celebration of driving clockwise so his window faced the fans.

Allison, a beloved member of the "Alabama Gang," was honored with a video message from Alabama football coach Nick Saban. He was introduced by Matt Crafton and Regan Smith, and inducted by his son, Robbie.

The son of Hall of Famer Bobby Allison and nephew of Donnie Allison, Davey Allison learned his skills around Alabama tracks and his break came in 1987 when he replaced Cale Yarborough.

He finished second in the next season's Daytona 500 to his father, the only father-son 1-2 finish in NASCAR's signature race.

Penske, the icon of motorsports, last year celebrated Team Penske's 500th victory as an organization. He won the Cup championship with Joey Logano and the Indianapolis 500 with Will Power.

He was introduced by Logano, Brad Keselowski and Ryan Blaney, and inducted by his son, Greg.

"He's known as 'The Captain' but to us, he's also known as a mentor, fierce competitor, role model and friend," Logano said.

Penske in 2016 celebrated his 50th season in racing. He built the two-mile speedway in Fontana, California, in 1996, and at one time owned Michigan International Speedway.

"He's a true titan of industry and a leader in advancing the popularity of American motorsports for more than 50 years as a team owner, track owner and even a driver," Blaney said.

Penske credited motorsports with building his corporation and setting the pace for his success.

"Racing is simply who we are," he said. "The lessons we learn in racing help drive our success in business and the exposure provided by NASCAR is a source of pride that builds our brand and our entire organization."

Roush was introduced by Ricky Stenhouse Jr., one of his current drivers, and inducted by 2017 Hall of Fame driver Mark Martin.

Roush, who wore his trademark Panama hat for his induction, said few expected him to succeed when he launched his NASCAR team in 1988. But Roush drivers have won a record 322 races across NASCAR's three national series and the organization has five national series owner championships. Roush is a graduate-level mathematician, engineering entrepreneur and a strong supporter of the Detroit automotive scene and Ford Motor Co.

"Few if any knowledgeable fans and even fewer Cup team personnel would have given me favorable odds of surviving for more than three decades, as I stand before you tonight," Roush said.