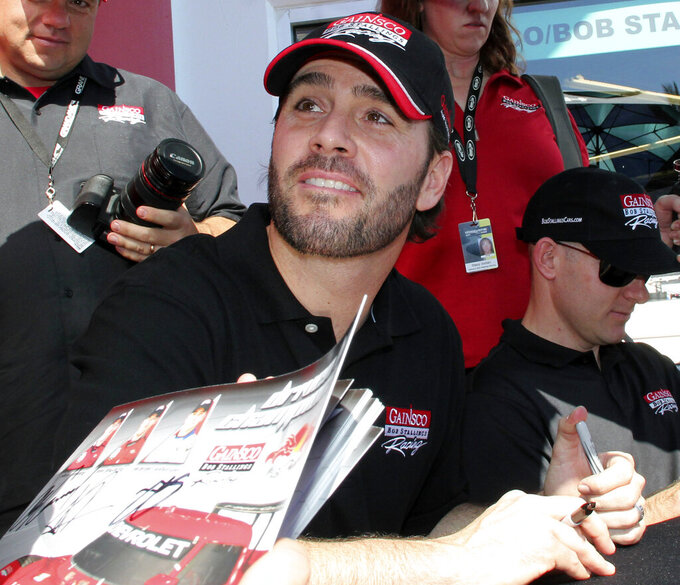 FILE - In this Jan. 29, 2011, file photo, Jimmie Johnson signs autographs for fans prior to the Grand Am Rolex 24 hour auto race at Daytona International Speedway in Daytona Beach, Fla. Johnson will race the Rolex 24 at Daytona for the first time since 2011 in January. The seven-time NASCAR champion will be paired with Simon Pagenaud, Kamui Kobayashi, and Mike Rockenfeller in the IMSA sports car race that is considered the unofficial opener of the racing season. (AP Photo/David Graham, File)

CHARLOTTE, N.C. (AP) — Jimmie Johnson will open his first year of semi-retirement by racing the Rolex 24 at Daytona as part of an Action Express Racing lineup revealed Friday that should be among the best in the field.

The seven-time NASCAR champion will be paired with Simon Pagenaud, Kamui Kobayashi and Mike Rockenfeller in the marquee IMSA sports car event considered the unofficial opener of the racing season. The 24-hour endurance race at Daytona International Speedway draws drivers from all over the world in a quest to collect the Rolex watches awarded to the winners.

Action Express will field a special, second Cadillac DPi-V.R for the star-studded lineup. It will be the No. 48, Johnson's number, and sponsored by Ally, which funded the final two seasons of his NASCAR career. The entry is being fielded in conjunction with Hendrick Motorsports.

“The Rolex 24 at Daytona is one of the marquee races in the world,” said Johnson, who called his Rolex teammates “three world class drivers.”

Johnson will be making his eighth Rolex start, first since 2011.

Pagenaud, an IndyCar champion and Indianapolis 500 winner, ran for Team Penske at Daytona the last three years. Kobaysahi has won the Rolex 24 the last two years with Wayne Taylor Racing driving its Cadillac, and Rockenfeller won the 2010 Rolex in an Action Express prototype and later that year won at Le Mans.

“I think we have a big chance to win,” Kobayashi said. “Jimmie is a NASCAR legend. I am looking forward to racing with him. Simon has a lot of experience in the U.S. and he has endurance experience along with all of his IndyCar success. Mike has a lot of time in fast technical cars.”

The No. 48 entry will test the Daytona road course next week and preparations for the Jan.29-31 Rolex begin a week before the race.

Johnson has retired from full-time NASCAR competition but is rapidly filling his 2021 schedule. He's going to be an IndyCar rookie for Chip Ganassi Racing on the street and road courses and has said he'd like to race sports cars. He's never won the Rolex 24 but was part of the runner-up team in both 2005 and 2008.

He's expected to be joined at the Rolex by reigning NASCAR champion Chase Elliott, who has also said he is entering the endurance race. Elliott is expected to be in the primary car for Action Express, the team owned by Jim France, leader of the family that owns both NASCAR and IMSA.

It was Rick Hendrick who initially, and accidentally, revealed after the NASCAR season finale last month that Johnson and Elliott planned to enter the Rolex. In the Action Express lineup reveal, the team said the No. 48 entry was “in concert with 13-time NASCAR Cup Series Champions Hendrick Motorsports.”

Chad Knaus, the seven-time championship-winning crew chief for Johnson, has moved into a management role at Hendrick and had taken a new interest in the sports car series. He was in the IMSA garage at Charlotte Motor Speedway and attended the endurance race at Sebring last month.

“We’ve been talking to Jimmie about running with us for many months,” said Gary Nelson, Action Express Racing team manager. “It all came together in November with the support of Hendrick Motorsports and their tremendous partner, Ally."