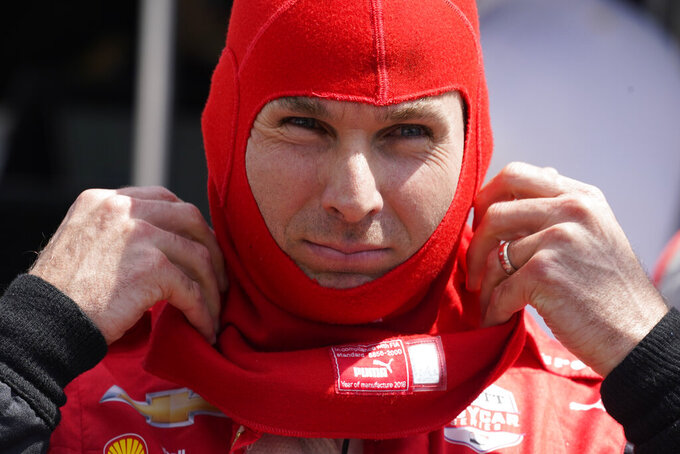 Will Power, of Autralia, prepares to drive in a IndyCar auto race at Indianapolis Motor Speedway, Saturday, July 30, 2022, in Indianapolis. (AP Photo/Darron Cummings)

MADISON, Ill. (AP) — The focus in IndyCar is clearly on the seven-driver championship race as it heads into the final oval race of the season. But one more round racetrack also means a chance for Jimmie Johnson to grab his first series victory.

The seven-time NASCAR champion added the ovals to his schedule this year, his second since moving to IndyCar, and he's steadily shown improvement. Johnson finished a career-best fifth last month on the Iowa Speedway oval, one spot higher than he did earlier in the season at Texas Motor Speedway.

Now he's got a chance Saturday night at World Wide Technology Raceway, the a 1.25-mile oval outside St. Louis where Johnson has raced three times before.

Only problem? Johnson can't remember two of those three races.

“I do remember my first race here in, I think '98,” Johnson said Friday. “I do not remember being here two other times... which is kind of weird. I was in an argument with my social media team — ”I’ve only raced here once" and they said, “We have these stats that show you have been here three times.'”

All three of Johnson's previous starts at Gateway came at the start of his career in what's now called NASCAR's second-tier Xfinity Series. He finished 15th in his debut race, then was 13th in 2000 and 14th in 2001.

But he has a valid reason for only remembering the 1998 race: It was the start of his NASCAR career and Johnson was desperate for his big break.

"Myself, Ryan Newman and Adam Petty were all fighting for that seat," Johnson recalled. “Adam Petty was sitting in the stands watching me. We’re literally fighting for this ride. I have more memories of that experience than the other two.”

For the record, none of them got the ride. The seat instead went to Mike Dillon, father of current Cup drivers Austin and Ty Dillon, and it took Johnson more than a year to finally land a full-time ride.

He made it to the Cup Series in 2002 and never looked back, winning 83 Cup races and a record-tying seven championships.

Johnson moved to IndyCar in 2021 but skipped the ovals, even those tracks were his specialty in NASCAR. He added the ovals to run a full season this year and the tracks have unsurprisingly been site of Johnson's strongest runs since making the switch.

He didn't drive an Indy car on at Gateway until Friday's first practice but had tested a Cup car at the track before it was repaved. So is he headed into Saturday night believing he can win?

“I want to. I don’t know if it’s fair to think that until I get out on the track, get an understanding of it,” Johnson said. “I think when I look at my oval performances, if there are multiple lanes, I seem to run well. Until I get out there, it’s hard to say.”

Only 59 points separate the top seven drivers headed into Saturday night's race, the first of three to decide the IndyCar championship. Mathematically, though, 11 drivers can still win the title.

The leaders believe the numbers are proof of IndyCar's overall strength.

“There’s no series like it in the world,” said Will Power, who holds a six-point lead over Scott Dixon. “You've just got to look at qualifying every week, you've got to look at the time gap from first to last every week. There’s not a series as tight as this, as tough as this.”

The points lead has changed five times in the last 10 races and Indianapolis 500 winner Marcus Ericsson controlled the point for six races following his victory. But consistency has been rewarded, as evidenced by Josef Newgarden, whose four wins are double any other driver in the field despite being fourth in the standings and not leading the points since April.

“In some ways it’s undercredited,” Newgarden said. “You can be with any team and have a shot at winning a race when you show up every single weekend. That’s not just a marketing line — it’s a reality. It’s just the best championship you will find on the planet with the top-line drivers of the world.”

With so much on the line, it will be imperative for title contenders to be aware of their surroundings and who is racing alongside them on Saturday night.

Reigning IndyCar champion Alex Palou learned firsthand last year how this race can disrupt a title run. He was wrecked out by Rinus VeeKay, and it cost him the points lead.

Although he recovered by winning the next race to retake the points lead and get his first title, Palou understands that few want to give an inch at Gateway.

Those out of the title hunt aren't willing to concede anything.

“I think you’re more aggressive with them because you know they probably have to back out,” Alexander Rossi said. “At the same time, certainly you don’t want to be the guy that hits them. You’re almost more aggressive and more cautious. It’s hard to explain.”