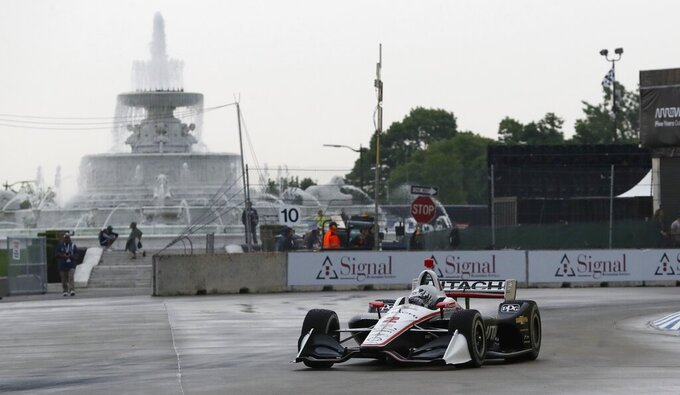 DETROIT (AP) — Josef Newgarden got a break and took full advantage of it.

Newgarden was fortunate a yellow flag came out when his race strategist called for a pit stop, helping the Team Penske driver take a lead he kept Saturday to win the first of two Detroit Grand Prix races.

"Tim Cindric made the call of the race in my opinion," Newgarden said. "He got us the win again. We had to execute, but getting that call from Tim was perfect."

Newgarden finished nearly a second in front of Alexander Rossi on the rain-slicked course to take the IndyCar points lead. Rossi also was second in the Indianapolis 500.

Rossi came up just short after earning the pole and leading the first 18 laps of the 43-lap race. The Andretti Autosport driver lost the lead when he went in for a pit stop just before Ed Jones hit a wall, bringing out a yellow flag while Newgarden was making his pit stop.

"He just got lucky with the yellow," Rossi said.

Roger Penske would say otherwise, according to Newgarden.

"When you talk to Roger, he'll tell you that you make your own luck," Newgarden said. "We were making that call regardless. The yellow certainly helped us."

Rossi acknowledged Newgarden had more than good fortune on his side as he failed to catch him on the 2.35-mile road course on the banks of the Detroit River.

"I tried to push him into a mistake, but he's a great driver," Rossi said. "We were kind of just stuck."

Rossi may not want to start out front Sunday for the second race in the Motor City because the position hasn't helped him win lately in Detroit. He also had the pole for the second of two races last year and led 46 of 63 laps, but he finished 12th after overshooting a turn and puncturing a tire.

Newgarden opened the year with a victory in St. Petersburg, Florida, and joined Indy 500 champion Simon Pagenaud as the series' two-time winners this season. Newgarden has won 12 IndyCar races since 2015.

Takuma Sato finished third on Belle Isle, followed by rookie Felix Rosenqvist and Ryan Hunter-Reay, who closed strong after spinning out and dropping to 15th early in the race. Pagenaud, who entered the race leading the series in points, was sixth after beginning 13th during a single-file start.

The 70-lap race became a 75-minute timed event after thunderstorms delayed the start by more than an hour. There were five yellow periods due at least in part to conditions, leading to 14 laps under caution and 29 under green.

Sato said the conditions were "extremely difficult," for 22-car field.

"The visibility is issue because of the water spray," Sato said. "Secondly, incredibly slippery."

Five-time champion Scott Dixon hit a wall to bring out another yellow flag, ending his race following 23 laps after he was running third. Dixon didn't finish a race for the first time in two years. He blamed himself, not the weather, for making a mistake.

"The front actually gripped a little too much in Turn 6 and I caught the inside wall," Dixon said. "When I hit the wall, it just broke the toe link. When it does that, it turns the opposite way and I went straight into the wall."

The race started after a delay and there was more sputtering than speed on display. It began under a yellow flag after Zach Veach spun out just before the race was to begin. Shortly after the race resumed, the yellow flag came out again because Matheus Leist briefly lost control of his car.