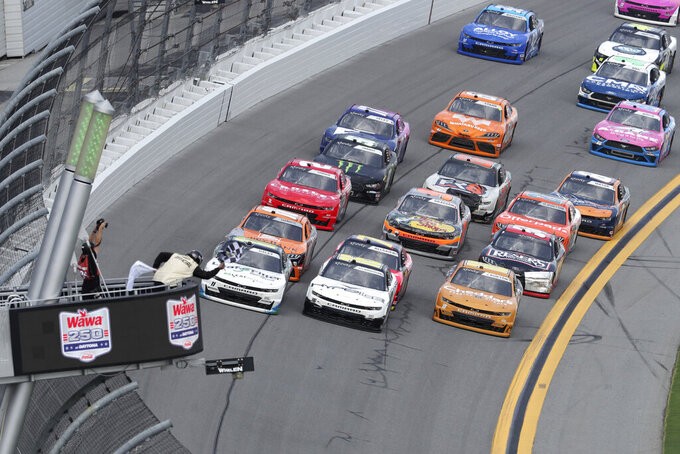 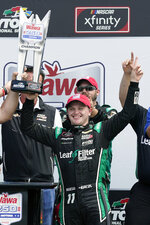 DAYTONA BEACH, Fla. (AP) — Justin Haley was content to sit back and help one of his Kaulig Racing teammates win at Daytona International Speedway.

Then he got a massive, out-of-nowhere push from Daniel Hemric, a bumper-bending shot that sent his No. 11 Chevrolet zipping around the outside lane at Daytona and past teammates AJ Allmendinger and Jeb Burton.

Haley was so unprepared for the ending that he broke down in tears after crossing the finish line first in the Xfinity Series race.

“It's really cool to race your teammates to the line like that,” said Haley, who added that he needed a boost after missing a race because of COVID-19. “It's definitely been a really tough season for the 11.”

His season may have turned with another huge day for Kaulig at Daytona. Not only did Haley win for the third time at the famed track, the powerhouse team claimed three of the top four spots and Allmendinger leapfrogged Austin Cindric for the series points lead.

Allmendinger, who won last week's race at Michigan, was .023 seconds behind in second. Burton was fourth, just behind Justin Allgaier in a three-wide finish.

It was Haley's fourth win in the last last seven Xfinity races on superspeedways, a jaw-dropping streak that raises his profile as he prepares to make the jump to the Cup Series in 2022. Kaulig has won five of those seven races.

The three-car team prides itself on working together and sticking to the plan. Other teams and manufacturers talk about that kind of approach, but those often break down in crunch time, and no one has enjoyed even similar results.

“I think we're on another level,” Haley said.

Kaulig looked like it would sweep the podium when Allmendinger turned below leader Christopher Bell with four laps to go and drove by with Jeb Burton and Haley in tow.

The trio looked as if they might stay in line and get a 1-2-3 finish, but Hemric had other thoughts. He slammed into Haley and powered him by everyone else on the outside.

The 100-lap race started Friday night but was halted after 19 laps because of heavy rain. Once officials realized the track was going to take too long to dry, they pushed the race a day.

Hemric and Burton notched enough points in the race to secure playoff spots.

But Haley and his Kaulig teammates have something they feel is more important.

“We have a lot of momentum,” Haley said.

Cindric, who won at Daytona in February and had held the points lead ever since, crashed for the second straight week and now sits in the No. 2 spot. Cindric slammed hard into the outside wall on lap 28 after Myatt Snider tapped him from behind in a turn. Several other cars got caught up in the melee.

Cindric had similar issues last week at Michigan, where his crew had to remove his hood because it covered his windshield. He returned to the track to pick up a few more points. He couldn't do the same at Daytona and finished 39th in the 40-car field.

Michael Annett took another step toward making a full recovery from a stress fracture in his right leg. The JR Motorsports driver finished 30th after getting caught up in an early wreck.

But just finishing was progress. Annett had femur surgery in July. He sat out races at Atlanta and New Hampshire. He had surgery during the Olympic break, returned at Watkins Glen and finished 11th on the road course.

He felt fine immediately after the race, but his leg started to tighten a few days later.

“Definitely more sore than I thought it was going to be,” he said.

He sat out two more races – at Indianapolis and Michigan – in hopes of getting closer to 100%.

Annett has a NASCAR waiver that would make him eligible for the playoffs if he finishes in the top 12 in points. He’s currently 13th.

Darlington Raceway next Saturday, the first of three events before the playoffs.