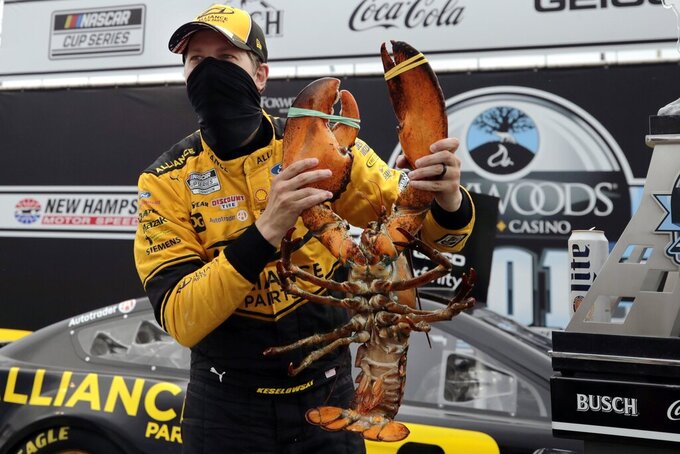 Ford is on a nice little winning streak at Michigan International Speedway, although it may not feel that way to Brad Keselowski.

Keselowski still hasn't won a Cup race in his home state, and it seems like every year that is a story when NASCAR comes to Michigan. Keselowski will have two more chances to end the drought this weekend, when MIS hosts a Cup doubleheader without fans Saturday and Sunday as part of this year's retooled schedule.

“I don't know what we've got to do to break through to get the win," Keselowski said. “I was actually talking to Joey Logano about it, because I won last weekend at his home track in New Hampshire. He keeps winning in Michigan, and I keep winning at his home track. We both say, ‘Hey, you want to trade?’”

The victory at New Hampshire was Keselowski's third of the season, and he is second in the points standings. All three wins have come since the sport returned from its coronavirus shutdown. Normally, Michigan hosts races in June and August, but the pandemic pushed them both onto the same weekend this year.

It's been a big week for Keselowski already. His contract extension with Team Penske was announced Monday.

The races in Michigan always take on a special importance for Ford, which has swept the MIS Cup races each of the past two years. Logano and Kevin Harvick won last year, and Clint Bowyer and Harvick prevailed the year before.

“It is our home track,” said Mark Rushbrook, global director of Ford Performance Motorsports. “It's unfortunate we can't have fans there for the race this weekend, but really looking forward to having our cars on track here again, especially with a doubleheader.”

Logano has won three Cup races at Michigan. He has two victories this season, both before the shutdown. He has only three top-five showings since competition resumed, although one was last weekend.

“I feel like we've been making some good progress here over the last few weeks in getting some speed back in our cars to where we can run in the top five again consistently,” he said. “We're just looking for smooth races at this point and those points will start coming again."

Michigan is set to become the second track in series history to run a doubleheader at the same facility on back-to-back days. Pocono was the first in late June.

“You can make big changes and get big results on the second day of racing. I really like that about the doubleheader aspect,” said William Byron, who finished a season-best seventh in the second Pocono race. “You don't have to wait until we go back to the same track later in the year.”

Erik Jones of Byron, Michigan, is another driver with local ties, and a win would be big for him. While Keselowski's future is now settled, Jones and Joe Gibbs Racing are parting ways after the season. Jones enters this weekend's races ranked 18th in the Cup standings.

With six races remaining in the regular season, 10 drivers have victories and there are six spots left for the postseason. Aric Almirola, Kurt Busch and Kyle Busch are the points leaders among drivers without a win.

Kyle Busch, the reigning Cup champion, did not last long at New Hampshire, skidding into the wall because of a cut tire. He will try again this weekend for his first victory of the season. He won at Michigan in 2011.

Starting this weekend, NASCAR is incorporating the “choose rule” into the restart procedure for all national series races except those held on road courses and superspeedways. As drivers approach a designated spot, they must commit to the inside or outside lane for the restart.

The rule was used during the All-Star race at Bristol last month.

“I've been looking for this for years,” Logano said. “I've brought it up in meetings for years and to see it kind of come into action at Bristol is something that I thought went really smooth. It was kind of exciting and interesting to see the decisions that drivers made.”