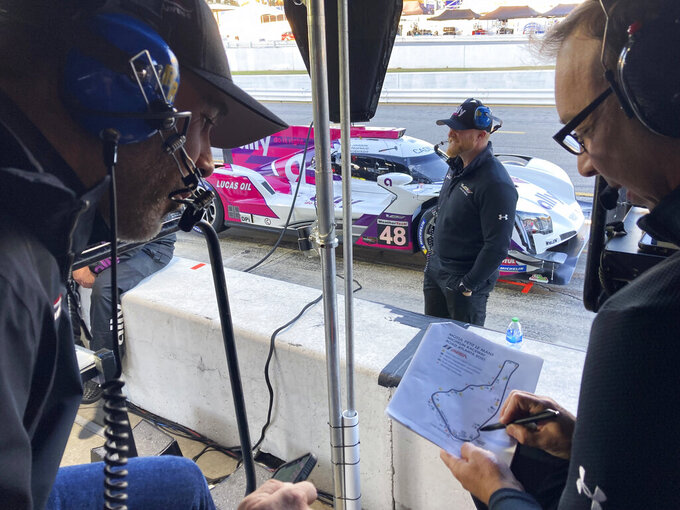 Jimmie Johnson, left, listens to crew chief Chad Knaus, Friday, Nov. 12, 2021, at Road Atlanta Raceway in Braselton, Georgia. Johnson and Knaus won a record-tying seven NASCAR championships together before their relationship fractured and they split in 2019 after 17 seasons together. The two have been reunited by work four times this season as Knaus has run a sports car team that Johnson and Hendrick Motorsports put together in partnership with Action Express in four IMSA endurance sports car races this year. Both say their relationship is currently in a good place. (AP Photo/Jenna Fryer)

BRASELTON, Ga. (AP) — Back on top of the pit stand in his natural habitat, Chad Knaus rattled off a list of instructions to his crew ahead of qualifying for the Petit Le Mans at Road Atlanta.

“Make sure we don't have upside down windshield wipers,” he radioed. “One thing I don't like is to look like a fool.”

But also, maybe a little different?

It has been a full year since Knaus was promoted from crew chief at Hendrick Motorsports to vice president of competition, and his intensity and attention to detail have not waned.

Only he seemed looser at Road Atlanta, over a three-day weekend that culminated with a 10-hour endurance race. He partnered with Jimmie Johnson for a NASCAR record-tying seven Cup championships, but this version of Knaus isn't so rigid.

He makes jokes — a lot of ‘dad jokes,’ but Knaus is now a 50-year-old father of two toddlers — and generally seems more easygoing.

Knaus once dumped his pit crew in the middle of a playoff race with Johnson. When they won the 2008 championship, his celebration was delayed because he first had to gather the sheets of his meticulous notes that had been swept away in the wind. But at Road Atlanta, this version of Knaus allowed The Associated Press to sit atop the pit stand and access nearly everything.

Including a nearly unobstructed view of his notes.

“That's not Chad Knaus down there, no way. That's a whole new Chad, racing sports cars and having fun Chad. Different guy altogether," said Steve Letarte, a former crew chief for Jeff Gordon and thus Knaus' closest partner at Hendrick Motorsports. But they were rivals, too, and the Johnson vs. Gordon 2007 championship battle is considered one of the greatest in NASCAR history.

Letarte walked away from the grind after the 2014 season — he never led Gordon past Johnson for a title — for a less-stressful job as an NBC Sports analyst.

He remained atop the No. 48, the team he built from scratch around Johnson in 2002, for another four years. And when his and Johnson's up-and-down working relationship finally fractured beyond repair, Knaus left the No. 48 after the 2018 season for a two-year stint as crew chief for William Byron.

Then he went into management, less weekends away from home, not so much pressure to keep everything running at the high level he demands. This time in IMSA? It's four endurance races in the No. 48 with Johnson in a collaboration between Hendrick and Action Express Racing. The stress level has been kicked down several notches.

“I probably look more relaxed, I'm a little older. But I don’t have my hands in everything," Knaus told the AP. "I'm here to help support and work with Jimmie and the guys, but the Action Express guys, they do the meat of the work and they ask me to do the strategy. Which is cool, you know?”

Don't be mistaken, though, Knaus is still very serious about work and winning.

In a new behind-the-scenes role at Hendrick, Knaus led the competition department for an organization that combined to win 17 of 36 races and put two drivers in the championship four. He was in North Carolina in the Hendrick “war room” helping with strategy when Kyle Larson won the Cup season finale at Phoenix Raceway to clinch Rick Hendrick's 15th championship. It was Larson's 10th points-paying victory of the season — equaling the mark Johnson and Knaus set in 2007.

He alternates NASCAR weekends at the track with Hendrick general manager Jeff Andrews, so the four IMSA endurance races were Knaus' only chance this year to dip back into the thick of competition. Hendrick gave him the job as he was still settling into his other job.

“It came together really quick, we were having a meeting in early January with Mr. Hendrick, and I went up and gave him a hug and in Mr. Hendrick fashion, he pulled me in tight and said, ‘Hey, I need you to go down to Daytona with Jimmie and run the 24-hour race,’” Knaus said.

“I didn't know it was going to turn into this. None of us did.”

The No. 48 finished second in its debut at the 24 Hours of Daytona. It would have scored another podium in the Twelve Hours of Sebring but Knaus admittedly “didn't know all the rules” and Kamui Kobayashi had exceeded his maximum drive time by the time he crossed the finish line in third. The penalty dropped the team to seventh, last in class.

That's fine. IMSA is where Knaus is seeing other forms of motorsports up-close for the first time in his career, and the exposure is valuable for a Hendrick organization tied heavily to Cup. NASCAR will debut a new spec race car next season, and its design has similarities to the GTD class cars in IMSA. No current NASCAR teams compete in that sports car class, but enough dabble in either Xfinity, Trucks, IndyCar or sports cars that Hendrick could use some flexibility.

“It’s really been eye-opening. We have a very narrow focus for Hendrick Motorsports, we don’t mess with Xfinity. We don't mess with trucks,” Knaus told AP, “and it’s served us well. But it has left us, in my mind, a little vulnerable going into the 2022 season with the (Next Gen) car because everybody else that we are racing against has some type of a tie to other racing. We don't have that at HMS.”

There is no clear end game. Nobody has said if the No. 48 will run sports cars in 2022, and Knaus said it's premature to think about a full-time IMSA entry. He's all for expanding into another series but said “it’s really hard to deviate from the model that we’ve got, right? It’s just done well for us."

Even if Hendrick decided to start a sports car team, Knaus isn't sure running it would be the right fit — “I don’t know if I have that in me” — because he doesn't know the series well, same for most everyone at Hendrick. He thinks HMS would have to hire from outside the organization to start a team.

He'd still want to be part of it, though, because watching Larson win the finale over computer screens from afar left Knaus feeling “really torn."

Larson essentially works with the old No. 48 team; crew chief Cliff Daniels was mentored by Knaus, and at least five other crew members worked under him. When they won the title with a late final pit stop, the second-fastest stop for the No. 5 team the entire season, Knaus would have liked to celebrate with his old guys.

He spends most of his time at a desk these days, but Knaus insisted his internal flame burns as hot as ever.

“I love it. I enjoy the heck out of it, my drive is not in question,” he said.