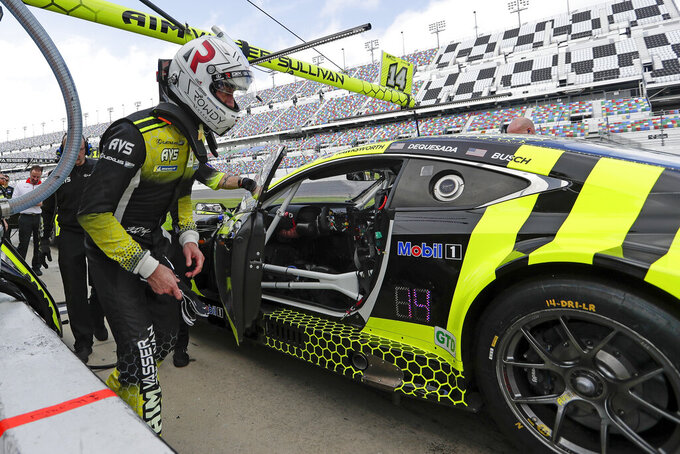 FILE - In this Friday, Jan. 3, 2020, file photo, Kyle Busch climbs in his car for a turn to drive during testing for the upcoming Rolex 24 hour auto race at Daytona International Speedway in Daytona Beach, Fla. Although his bid for a third championship doesn’t begin until the Daytona 500 on Feb. 16, his racing season starts this weekend with a cameo appearance in the Rolex 24 at Daytona. (AP Photo/John Raoux, File)

DAYTONA BEACH, Fla. (AP) — The way Kyle Busch sees it, there is a flaw in the championship ring NASCAR awarded him last month.

It lacks any indication that the 2019 title was actually his second championship. Busch wants it fixed so it displays exactly what he's earned. He has studied the issue and knows the New England Patriots created a ring that showcases their six Super Bowl victories.

When his career is over, Busch wants just one ring to encapsulate his accomplishments. He insists he will close his career alongside greats Richard Petty, Dale Earnhardt and Jimmie Johnson.

But he doesn't have seven Cup Series titles.

Busch's bid for a third championship doesn't begin until Feb. 16 at the Daytona 500, a race he desperately wants to win. Busch is 0 for 14 in “The Great American Race” with a bitter runner-up finish to Joe Gibbs Racing teammate Denny Hamlin in last year's 1-2-3 Gibbs sweep.

He has won at every active NASCAR track except The Roval at Charlotte Motor Speedway yet his 56 career Cup victories do not include the Daytona 500. His warm-up begins this weekend at the Rolex 24 at Daytona, a twice-round-the-clock endurance race featuring champions from series all over the world.

The event is packed with Indianapolis 500 winners, Le Mans winners and some of the most skilled drivers from global series. Busch is on hand to steal the show.

His longtime partnership with Toyota got him the gig to drive a Lexus for the AIM Vasser Sullivan team, and Busch is the star attraction. He loves it, too, and at a January team dinner he wore that ring. For one night, he seemed as if he was that once-upon-a-time fun Kyle Busch.

He was just 16 when he first came into NASCAR in 2001, right as the series was passing a rule that sidelined him until his 18th birthday. He was brash even then — it's some chip he and older brother Kurt have just always seemed to have, though he was tame compared with Kurt, the 2004 champion.

Kyle Busch has always done his best to speak the truth as he sees it, one sarcastic eye roll, thumbs-up or one-word answer at a time.

His opinions have not always been popular with NASCAR and it makes no difference whether he was right. The series' “Car of Tomorrow” was terrible, he was just the first to say so and his outspokenness was often blamed for fans hating the car. Many fans found him arrogant, entitled or whiny or a mix of all three.

His career has been golden: high-profile rides first at Hendrick Motorsports, then JGR, where he has been since 2008. Busch has 208 victories across NASCAR's three national series, and some argue his tally equals Petty's record 200 Cup wins. He would undoubtedly have dozens more if NASCAR had not set limits on how much he can compete in the lower series.

The dominating way he wins, his brash celebrations, his disregard for those who boo him and all those wins have made Busch something of a villain, and that doesn't always put him in the best of moods. Toss in a bad day at the track, plus idle time each weekend because NASCAR only allows him a maximum of five Truck Series races (he went 5 for 5 last season) and seven in the Xfinity Series (4 for 7), and Busch can be a real bear.

So it was a very long summer, and a 21-race losing streak didn't help. He lashed out in the opening race of the playoffs last September when he ran into the back of a lapped car and accused some in the field of not being qualified to race at NASCAR's top level.

Busch says that incident is one of the reasons he is running the Rolex this weekend. His Vasser Sullivan entry is in the GT Daytona class, where Busch will be mired in traffic with slower cars and inexperienced drivers with the faster classes closing in on him. It will be chaotic.

“Cody Ware says he can't drive and watch his mirrors?” Busch said referring to the lapped-car flap in September. “Watch this.”

Busch then flipped his middle finger.

Although Busch ran into the lapped car of Garrett Smithley at Las Vegas, he was targeting Ware, who wasn't in that playoff race. The entire flap led to a heated discussion about on-track etiquette, talent discrepancies and drivers who purchase their seats in the big leagues. Ware was scheduled to compete in the Rolex 24 this weekend but his team pulled out late Monday.

In the Nov. 17 season finale, Busch beat Gibbs teammates Hamlin and Martin Truex Jr., as well as Kevin Harvick, to join Johnson as the only active drivers with multiple titles. Of course, Johnson is tied with Hall of Famers Petty and Earnhardt for the record, but Johnson is retiring at the end of the year. Busch turns just 35 and has twice proven he can rise through adversity to finish the job and doesn't appear to be going anywhere anytime soon.

He won his 2015 championship in a season where he missed 11 races because he broke both his legs in a crash the day before the Daytona 500. His 2019 season had its share of personal struggles as Busch and his wife, Samantha, have been very public in their battles with infertility.

Their only child, son Brexton, was conceived through IVF treatments and their quest to give him a sister suffered a heartbreaking setback when Samantha miscarried the day of the 2018 awards ceremony in Las Vegas. The couple tried unsuccessfully again during last season, and Busch used a portion of his championship speech to address their struggles.

“I'm right here with you knowing how hard its been to go through multiple, yes multiple, failed attempts of IVF this year, to walk around and try to face people week to week, always knowing in the back of my mind how helpless I feel in life knowing how much I wanted to answer your prayers in giving you the gift of our baby girl,” Busch told her.

Busch is typically able to separate his personal and professional lives, but when things aren't going well in either area, his temper can be short and his sarcasm biting.

“Think about his whole life. He's got Sam and Brexton, but other than that, it's racing,” said Joe Gibbs. “And when something goes bad in racing for him, think about how important that is, and it upsets him. Normally, the next day he's a lot better.”

Busch has a legion of fan support from “Rowdy Nation," the group he bows to with the checkered flag after every victory. Busch appreciates their backing beyond words, especially when he gets exhausted by the politics of a new NASCAR rules package and the grind of the 38-race schedule. Busch has other things to worry about, too: He owns the best truck team in the sport, and this year he will launch “Rowdy Energy” an energy drink Busch says he helped develop.

“Mine's going to be better, better for you and better tasting,” Busch insisted.

Busch has not been this outwardly happy in ages. Perhaps it comes with being the champion again, and the absolute belief that he can be the best NASCAR has ever seen.

The Daytona 500 is right around the corner, and a poor showing there could just as quickly send Busch scowling through the garage. He is always just one win away from feeling invincible.