Larson settled in at Hendrick one month into new job 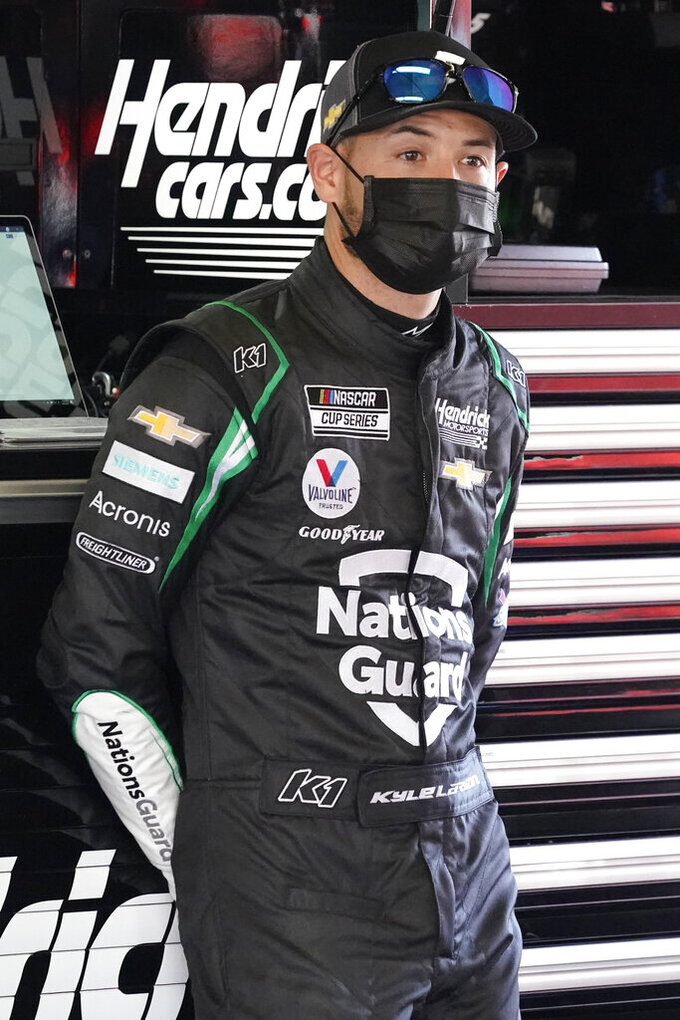 LAS VEGAS (AP) — Kyle Larson was out of NASCAR long enough to wonder if he'd still feel comfortable in a Cup car. He raced in nearly 100 events last year, just not in 3,400-pound stock cars.

Would it feel the same as he remembered? Had his familiarity with the interior faded? His instincts slipped?

Larson, who won 42 of 83 open-wheel races during his NASCAR suspension for using a racial slur, has fallen right back into the old routine.

“I thought there would be cobwebs and rust. But maybe because I raced so much last year in sprint cars and open wheel cars ... I felt as fresh as ever," Larson said. "When I got in the car and put my head-and-neck restraint on and buckled up, everything just felt normal. It didn’t feel like I had been out of the car a long time.

Larson, fired by Chip Ganassi Racing after using a racial slur during an iRacing event in April, was hired by Hendrick Motorsports when his ban was lifted at the end of last season. His official return was last month at Daytona International Speedway, where he opened his second chance in NASCAR with a 10th-place finish in the Daytona 500.

He was running in the top three with seven laps remaining a week later on the Daytona road course when Larson, in a moment of admitted over-aggressiveness, spun his Chevrolet and fell to a 30th-place finish. Last week at Homestead-Miami Speedway, Larson led five laps and finished fourth, marking back-to-back weeks he believed he had a shot to win.

Next up is Sunday's race at Las Vegas Motor Speedway. It's the fourth race of the season and falls one day short of his fourth and final Cup race a year ago. The season was paused for the pandemic, Larson was suspended during the shutdown and missed the final 32 races of the year.

Despite his layoff and the move to a new organization, he's already fitting in well at Hendrick Motorsports. The team got its first win of the season last week from William Byron, a playoff driver who typically hovers around the cutoff mark but is now automatically qualified.

Alex Bowman had one of the fastest cars at the Daytona 500, and reigning series champion Chase Elliott could have won both the Daytona 500 and the road course race a week later. Chad Knaus, vice president of competition, believes Hendrick drivers could have swept the first three races of the season and Larson could get a victory soon.

Coming off the suspension, Larson has made a strong off-track impression on Hendrick, too. He has been a welcome addition to the driver debriefs, which no longer include seven-time champion Jimmie Johnson downloading information for the first time in nearly two decades.

“I've been really impressed with Kyle. Having him here, he's been very open, very forthcoming with information from what he's feeling,” Knaus said. “He's an open book. He's been great and we could not be more pleased with his performance.”

He's also noticed a patience in Larson, particularly at Homestead last week when Larson could have been too aggressive with his preferred style of riding up against the wall.

“Everybody also had the thought of Kyle, fast but he crashes. Or fast but he hits the wall, fast but does a lot of those things,” Knaus said. "Homestead would have been a great opportunity to compromise the car and he didn't do it. He ran top-five all day long, didn't think he had more than that and didn't want to push it.

“That's a high level of maturity that I did not know he had.”

Las Vegas should be the track that returns some normalcy to victory lane after three surprise winners through the first three races.

Michael McDowell and Christopher Bell scored the first wins of their careers to open the season and Byron earned his second-ever Cup victory. But the 1.5-mile traditional intermediate Las Vegas track represents the type of track the Cup cars frequent most and the top teams really pull away from the pack.

Harvick is the 5-1 favorite to win Las Vegas, where he won in 2016 and 2018. Martin Truex Jr. is 13-2, while Chase Elliott and Denny Hamlin are both 8-1. Team Penske teammates Brad Keselowski and Joey Logano are 9-1 and Logano is the defending race winner. ... Chase Briscoe is leading the rookie of the year standings by nine points over Anthony Alfredo. Briscoe last season was the first Xfinity Series driver in history to sweep the Las Vegas races. ... Raiders quarterback David Carr is the grand marshal. ... Spectators returned to the speedway for the first time since last February's race. The speedway was permitted to host approximately 12,500 fans and tickets sold out for all three days of racing. Infield camping was not permitted. "This is the first time I can ever remember being disappointed to announce a sellout,” said Chris Powell, track president.