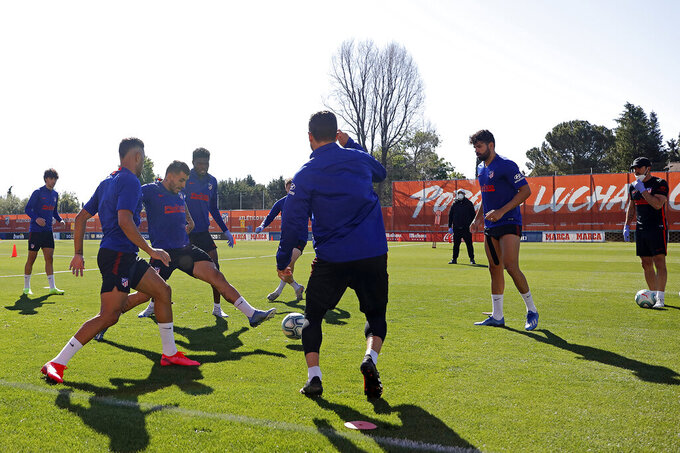 In this photo provided by Atletico Madrid, team players take part in the first group training session in Madrid, Spain, Monday May 18, 2020. All Spanish league clubs can begin group training sessions this week despite stricter lockdown restrictions remaining in place in parts of Spain because of the coronavirus pandemic. (Atletico de Madrid via AP)

With attendance limited and other safety measures in place at Federated Auto Parts I-55 Raceway, Larson edged Brent Marks by 0.794 seconds — with Sweet third in the 40-lap feature on the one-third mile oval.

Larson has returned to dirt racing after losing his NASCAR Cup ride with Chip Ganassi Racing for using a racial slur during an online race.

"This win means so much personally. I can’t even describe it,” Larson said.

Larson earned $20,000 for his ninth career series victory as part of the two-state Drydene Double Down Invitational, with Ricky Thornton Jr. also getting $20,000 for his Late Model victory at Jackson Motorplex in Minnesota in a race run without fans at the track.

The Sprint Car series returned last week at Knoxville Raceway in Iowa for a race run without fans. The series also plans to limit attendance next week for a Friday-Saturday doubleheader at Lake Ozark Speedway in Eldon, Missouri.

On Friday night in the Pevley opener, Sweet edged Larson by 0.189 seconds in the 30-lap feature. In qualifying Friday, Larson became the first Sprint Car driver to break 10 seconds at the track, turning a lap in 9.995.

On Friday at Jackson, Canadian Ricky Weiss won in the series’ return from the pandemic break.

The English Premier League says two people from two clubs have tested positive for COVID-19 in the second round of testing.

The league did not name the pair or the clubs, or say if they were players or staff.

The league tested 996 players and club staff on Tuesday, Thursday, and Friday.

In the first round of tests of 748 people, there were six positives from three clubs. All are in seven days of self-isolation.

In the second round, the number of tests available to each club was increased from 40 to 50.

The coach of one of Florida’s top high school football programs has been suspended, and an investigation has been launched into whether the team that has won state championships in each of the past three seasons broke policies by practicing during the pandemic.

The district says football practice at this time would be an “unauthorized athletic activity” and parents of players who may have taken part were being interviewed by school officials as part of the investigation.

Northwestern won the Class 6A state title in 2017 and 2018 before winning the Class 5A championship last season. The Bulls are a seven-time state champion overall.

The Tour of Denmark in September has been canceled because organizers feared the best Danish cyclists, at least, would be committed to the Tour de France on at the same time.

The Tour of Denmark was originally in mid-August, and requested new dates from the International Cycling Union. The governing body moved the tour to Sept. 1-5.

Denmark has been reopening schools, shops, restaurants, and churches in the last two weeks, but the border remains closed to foreigners, and tour organizers aren’t certain when they will reopen. The organizers also say they aren't able to test all participants for COVID-19, and prevent crowds along the route.

Jockeys and stalls handlers in Britain will be required to wear masks when horse racing hopes to resume next month during the coronavirus pandemic.

The British Horseracing Authority is hoping to get government approval to return on June 1 for the first time since March.

Completion of an online education module and screening of all participants before they can attend an event are among the initial protocols. They will include health-related questions and temperature checks before people are allowed to enter racecourses.

Social distancing restrictions will be employed, along with face coverings for those likely to get closer than two meters, including jockeys, trainers, stalls handlers, stable staff and valets.

The BHA is also planning an ongoing surveillance program to monitor the coronavirus, including some testing.

The Czech league restarted under strict conditions on Saturday.

Teplice beat visiting Liberec 2-0 without spectators as the First League resumed after a 73-day stoppage. The teams entered the stadium separately and players were not allowed to shake hands or celebrate goals together.

The restart was made possible after the government eased restrictions that contained the coronavirus outbreak.

The Czech Republic has not been as badly hit by the pandemic as the likes of Italy, Spain, France and Britain.

One player from league leader Slavia Prague and another one from Mlada Bolestav tested positive for the coronavirus in a mandatory initial round of testing and were quarantined. All the tests in the second round of testing were negative.

The government allowed a maximum of 150 people at Teplice's stadium on Saturday even though current restrictions limit gatherings to 100 people. That number will increase to 300 next week.

Six rounds of games in the regular season and the playoffs remain in the league, which is scheduled to be completed by July 15.

The soccer league in Spain will be allowed to resume from June 8, Spanish Prime Minister Pedro Sánchez said Saturday.

While the top tier, La Liga, can play from this date, it has already said it wants to resume play on June 12. It is unclear when the first games will be held.

There has been no play in the top tier due to the coronavirus crisis since March 12.

Teams have recently returned to training at club facilities, but with players practicing individually.

Barcelona is top of the league with a two-point lead over Real Madrid after 27 of 38 rounds.