The Latest: Johnson hopes to run Boston Marathon in 3 hours 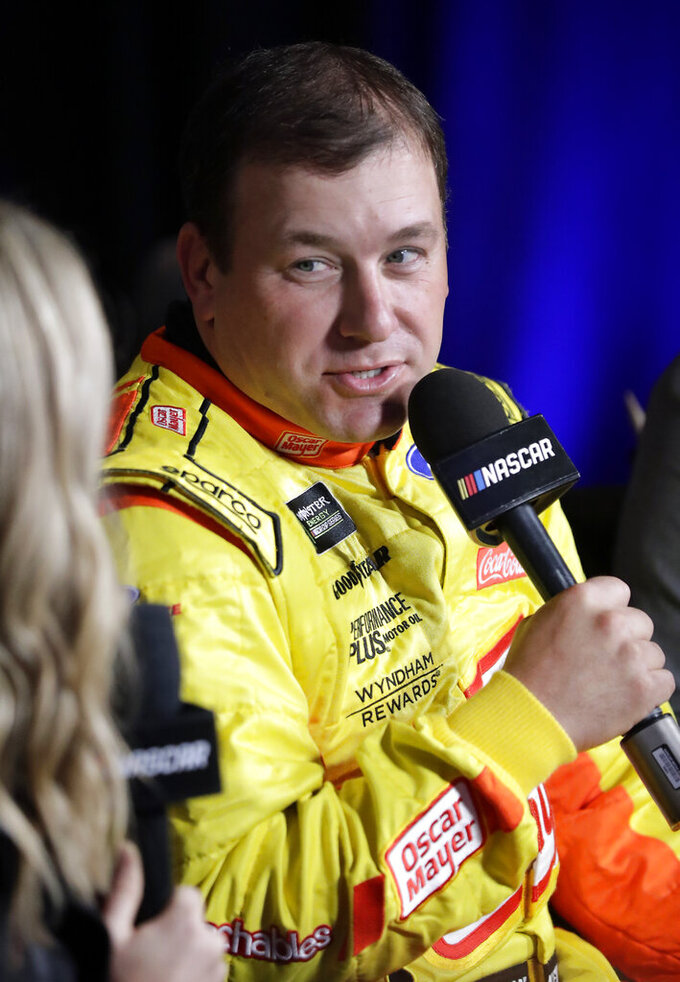 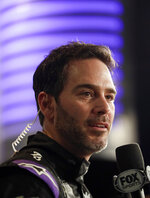 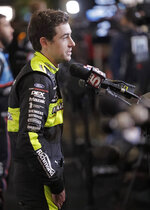 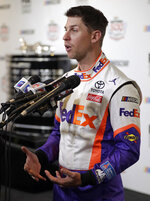 DAYTONA BEACH, Fla. (AP) — The Latest on NASCAR media day for the Daytona 500 (all times local):

Jimmie Johnson has a lofty goal for the Boston Marathon: completing the grueling, 26.2-mile course in less than three hours.

The seven-time Cup Series champion plans to run the April 15 marathon two days after a 400-mile NASCAR race at Richmond Raceway. And he doesn't expect it to be just a Monday stroll.

"As long as I stay healthy and I can keep that (training) volume up, I think I'll have the kind of day I want to have," Johnson said.

The 43-year-old Johnson, an avid cyclist and fitness freak, has never attempted a marathon. He ran 22 miles once and has run 20 miles every Monday for the last five weeks. Attempting the Boston Marathon hadn't even been an option until NASCAR's schedule changed this year.

It first caught his eye in 2013, the year of the bombings.

"I was watching the race on television and recognized it was on a Monday and thought, 'Man, I can do that,'" Johnson said. "I can only imagine how special the following year would have been with 'Boston Strong.'

"I was convinced I was going to do it. But the NASCAR schedule comes out, schedule changes, it's Sunday Bristol, Monday Boston, and I'm like, 'There's no way. I can maybe limp my way through it, but there's just no way. So I've been watching ever since, wondering if and when the NASCAR schedule would change and it did this year."

So Johnson already has started training. He's running 70 miles a week and hopes to extend that to 90 to 100 miles a week by late March.

He also teamed with sports drink Gatorade to help prepare him.

Johnson spent Tuesday "treating my body like it was a race car, what lubricants it needs, what fuel it needs and all the particulars that go with it. I feel like I have a good plan coming together. As long as I stay healthy."

As for "Heartbreak Hill," the infamous incline about 20 miles into the race that poses a daunting challenge for even the most experienced runners?

"I'm trying to ignore it until I have to meet her in person," Johnson said.

Ryan Newman would relish the opportunity to drive the Oscar Mayer wienermobile.

Oscar Mayer is Newman's primary sponsor this season on the No. 6 Ford for Roush Fenway Racing. Newman wore a yellow and orange firesuit and was grilled on his desire to take a spin in Oscar Mayer's famed 27-foot-long hot dogs on wheels.

"I would do it, yes," Newman said. "I don't think anybody's 'Dukes of Hazzard' jumped the Oscar Mayer wienermobile."

Paul Menard says he talked with Jimmie Johnson and hashed out the late-race wreck that cost Menard a win in the exhibition Clash.

Johnson triggered a wreck that wiped out nearly the entire 20-car field when he dipped low and tried to side-draft Menard as they battled for the lead. Johnson turned Menard, starting a massive chain-reaction behind him. Johnson zipped past Menard and won the rain-shortened race.

"Jimmie did what he did to try to win. It was not intentional," Menard said.

Menard declined to discuss many specifics of the conversation, saying he was ready to "move on" from the incident.

"What's done is done. Looking into the rearview mirror on that one," Menard said.

Not everyone was ready to let it go. Fellow driver Corey LaJoie joked that he might have a better shot in the season opener "if Jimmie can take out another 20 cars on Sunday."

Corey LaJoie believes he's got the best beard in the Cup Series.

It's about to get national exposure.

LaJoie's face and beard are featured on the front of his No. 32 Ford for Speedweeks.

"I was against it at first," LaJoie said at Daytona 500 media day Wednesday. "But Old Spice had an idea what they wanted to do and they ran with it. They only gave us the one option. There was no A, B and C options.

"It was, 'Your face is going on the car with what's going to look like hair down the (side) of the car because we're pushing our dry shampoo and deal with it.' I was like, 'Fine, right?' But as soon as we put that thing out, it's just taking traction like no other, way more than anybody expected."

There have been jokes, memes and plenty of puns since the paint scheme made its debut at Daytona last week.

Busch has driven the No. 18 Toyota for Gibbs since 2008 and is in a contract year with the organization. He was surprised Wednesday to learn his contract status was public knowledge but indicated he's not truly a free agent.

"We're in discussions right now, we are talking. It's all been agreed to," Busch said. "It's just a matter of putting pen to paper. We're all good."

Busch has won 47 Cup races with Gibbs and the 2015 championship. He's raced for the title in each of the last four seasons.

Johnny Sauter has salvaged his 2019 season roughly a month after it fell apart with no notice.

Sauter lost his ride with GMS Racing in January when the team decided to instead use reigning Truck Series champion Brett Moffitt.

The decision blindsided Sauter, who won six races for GMS last season and finished fourth in the championship finale. Sauter won the Truck Series championship in 2016, has not finished lower than fourth the last six seasons and won 13 times for GMS.

Sauter finally put together a new job right before he had to report to Daytona International Speedway. He will drive again this season for ThorSport Racing, where raced from 2009 until he joined GMS in 2016.

"I'm returning home," Sauter said. "I couldn't be more proud of going back there and running for a championship."

ThorSport is expanding to four full-time Truck entries with Sauter. He'll be teammates with Matt Crafton, Ben Rhodes, Myatt Snider and Grant Enfinger. Snider will drive in select races for the team.

Casey Mears will have a paint scheme for the Daytona 500 .Mears secured one of the open spots for Sunday's race when he qualified in an all-black No. 27 Chevrolet. Without a guaranteed spot in the field, Germain Racing was unable to sign a primary sponsor in time for qualifying.

Still wearing a plain, black fire suit, Mears at least had a Rim Ryderz hat on his lap.

"They literally handed me this hat when I walked through the door," Mears said at Daytona 500 media day. "I'm learning as I go. It looks like a pretty cool company."

Mears, who has one career Cup win in 488 starts, said he had no other races scheduled for this season. He was second in the 2006 Daytona 500.

Mears is running a second entry for Germain in a car built in collaboration with Premium Motorsports. He was one of the six drivers vying for four open spots in NASCAR's season opener.

Ross Chastain, a watermelon farmer from Florida and aspiring race car driver, had accepted he'd likely always be a journeyman driving for back-marker teams that had little chance of winning races.

Then a chance encounter with a potential sponsor changed Chastain's life.

Chastain was spotted washing a motorhome between practices by the head of DC Solar, and the chairman was fascinated to learn that was how Chastain earned additional money needed to fund his racing dreams. Jeff Carpoff was adamant he wanted to sponsor Chastain and paid for Chastain to drive a handful of Xfinity Series races for Chip Ganassi Racing.

Chastain won in his second start in Ganassi's equipment and by November he had a full-time Xfinity ride with Ganassi funded by DC Solar.

The joy from his long-awaited break was short-lived. Federal investigators raided DC Solar's headquarters in December and the Carpoffs have been radio silent since. Ganassi has shuttered the Xfinity team, and Chastain was looking for work roughly a month before the season began.

"I am not driving the race car I thought I would be, but there are thousands of people whose lives got turned upside down and when I can't sleep at night it is because of that," Chastain said. "A lot of people who have had to find new jobs."

The eldest son of team owner and Pro Football Hall of Fame coach Joe Gibbs died in January at age 49. J.D. Gibbs discovered Hamlin at a late-model test at Hickory Motor Speedway in North Carolina in the early 2000s.

Hamlin's charity is donating $111 to the J.D. Gibbs Legacy Fund for each lap he leads in the No. 11 Toyota in 2019. Hamlin also hopes to dedicate a victory to Gibbs, preferably at Daytona.

"It'll be super important," Hamlin said. "Obviously, everyone knows how important he was for me and my career and everything he did for us. Certainly having success on track will be crucial for that. Now that I pledged $111 for every lap we lead, it's going to be important for me to get up front and be up front often."

Gibbs died from complications following a long battle with a degenerative neurological disease. It was revealed in 2015 that he was dealing with "conditions related to brain function." He was serving as president of JGR at the time.

Daniel Hemric hopes his surprise run in time trials for the Daytona 500 is just one of many highlights in his rookie season.

Hemric advanced into the final round of single-car qualifying and landed fifth on the timing stand — behind only Hendrick Motorsports' four-car sweep.

Hemric will make his Cup Series debut in Sunday's season-opening race and use the biggest stage to introduce himself as a throwback of NASCAR's earliest stars. Hemric grew up in Kannapolis, North Carolina, home of the Earnhardt family and he grew up rooting for the late Dale Earnhardt.

His big break came with Richard Childress Racing, Earnhardt's old team, and his car number is from a sacred stash that isn't given to just any driver. Hemric will drive the No. 8 Chevrolet, used before by Earnhardt family patriarch Ralph Earnhardt and later Dale Earnhardt Jr.

Earnhardt Sr. drove the No. 3 Chevrolet, and Childress brought that number back for his grandson, Austin Dillon. Dillon drove the No. 3 to victory in last year's Daytona 500.

"It's a huge sense of pride to be from Kannapolis and also a sense of pride in our race shop, when guys realize where I come from, where I've been and how I got to this point, it puts a pep in everybody's step," Hemric said. "It's the American dream of how a guy can get to this level, and I'm pumped up to carry the flag for Kannapolis and have a shot to build something incredible."

Even though he thinks it's cool that people call him "champ," he says he and his Team Penske crew need to turn the page and start looking toward the new season.

"That was last year," Logano said Wednesday at Daytona International Speedway. "One of my favorite Roger Penske's quotes is, 'Don't trip over your press clippings.' That's last year and we need to keep looking forward because right now we're past champions in my eyes. As soon as we unloaded down here, the championship fun is over and it's back to trying to win another one. We're back at zero with everyone else."

He finished third in the exhibition Clash on Sunday and was back at the track three days later for Daytona 500 media day.

Logano will try to become the first defending series champion to win the Daytona 500 since Dale Jarrett in 2000.