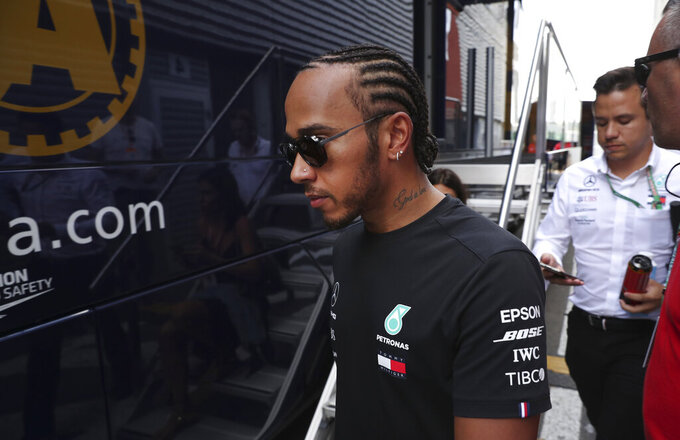 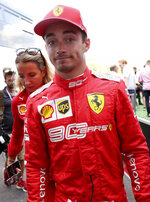 SPA-FRANCORCHAMPS, Belgium (AP) — Charles Leclerc hopes to make it third time lucky from pole position and finally give Ferrari its first win of a difficult Formula One season in the Belgian Grand Prix on Sunday.

He qualified comfortably ahead of teammate Sebastian Vettel on Saturday in a dominant weekend so far for Ferrari. Leclerc beat his own leading time to finish .748 seconds clear of Vettel and .763 ahead of five-time world champion Lewis Hamilton.

"It obviously feels amazing," Leclerc said. "The gap is quite big today, but it doesn't mean it will be like that tomorrow."

Still, it was another impressive performance from Leclerc, adding to his poles in Bahrain and Austria. He won neither race, hit by a sudden engine failure when seemingly coasting to victory in Bahrain, and then out-muscled late on at Spielberg by a rampaging Max Verstappen.

Although Leclerc is in his first season with Ferrari, and only his second in F1, he leads four-time champion Vettel 3-1 in pole positions this year and has out-qualified his senior colleague in six straight races since Vettel's pole in Canada.

"I have made some changes in qualifying," Leclerc said. "I definitely feel the difference and feel it's going the right way."

"Charles did an exceptional job," Hamilton said. "He's been so quick all weekend."

Ferrari has looked significantly faster than Mercedes in terms of straight-line speed on F1's longest track at 7 kilometers (4.3 miles), placing 1-2 in all three practice sessions and all three sections of qualifying. Leclerc beat Vettel in five of those, although cooler conditions expected for Sunday's race could negate some of Ferrari's speed advantage.

The most famed team in motorsport desperately needs a win.

Ferrari's last was by former driver Kimi Raikkonen's at the United States GP last October; while Vettel's last was on this track last year. There have been 20 GPs without one since for the German driver, who has led and lost the past two F1 championships to Hamilton following clumsy errors.

This time it was Hamilton making a surprisingly sloppy mistake, mangling his Mercedes when crashing under no pressure in the third and final practice earlier Saturday.

Hamilton almost had another incident in qualifying when he narrowly avoided bumping into his teammate Valtteri Bottas, who starts the race from fourth on the grid.

Hamilton felt he needed to apologize to his team after his rare crash. The runaway championship leader lost control coming out of the Fanges chicane, veering left at full speed into the protective tire barriers and crumpling the nose of his car.

"It was a terrible session for me when you know how hard these guys work to build a car," said Hamilton, who leads second-place Bottas by 62 points in the standings. "I was just trying to pay them back with a good qualifying session."

Hamilton later played down the mistake, saying, "You're looking at it way too deeply ... I'm only human."

But for a driver who rarely makes mistakes on any track — let alone one that was bone-dry — it was nonetheless a glaring error.

That session was interrupted as Hamilton's car was taken away. The British driver walked slowly back to the team garage and Mercedes mechanics faced a race against the clock to get the car ready for qualifying.

"There's so much pressure on these guys," Hamilton said. "They relish the challenge (and) did an exceptional job."

The front corners — the suspension and wheel assemblies — the nose and floor all needed fixing in a little more than two hours.

"When I looked at the car, I thought, 'Oh no!'" Hamilton said, feeling guilty at the damage he had caused.

Mechanics were still working on the bashed-up Silver Arrow when qualifying started.

They got a bit more time than expected after the first part of qualifying — Q1 — was held up after the back of Robert Kubica's car caught fire following an engine combustion failure, sending a cloak of smoke around his Racing Point car.

Q1 was halted a second time with seconds remaining when Italian Antonio Giovinazzi pulled up with a power failure.

In third and final practice, Leclerc was .451 seconds quicker than Vettel in warm and sunny conditions in the Ardennes Forest.

It set the tone for another impressive display of speed, and now he must convert that into a victory on race day.