List of sports events affected by new virus from China 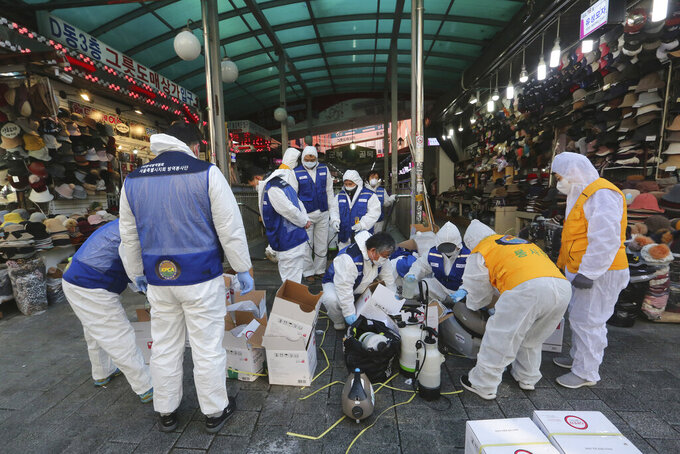 In this Feb. 5, 2020, photo, workers wearing protective gears prepare to spray disinfectant as a precaution against the coronavirus at Namdaemun Market in Seoul, South Korea. Even as cases and deaths from the new virus mount, fear is advancing like a tsunami - and not just in the areas surrounding the Chinese city of Wuhan, the center of the outbreak that has been declared a global health emergency. (AP Photo/Ahn Young-joon)

World indoor championships in Nanjing from March 13-15 postponed to March 2021.

Asian Championships in Chongqing from April 25-May 3 to be relocated.

Hockey Pro League matches between China and Belgium on Feb. 8-9 and Australia on March 14-15 postponed.

Asian Nacra 17 Championship in Shanghai from March 1-6 moved to Genoa, Italy from April 12-19.

Asian women's Olympic qualifying Group B tournament relocated from Wuhan to Sydney from Feb. 3-13. China vs. South Korea playoff on March 11 moved from China to Malaysia.

China's “home" match against South Korea in the final qualifying stage for the Tokyo Olympics to be played in Sydney.

Singapore athlete of the year awards on Feb. 26 postponed.

SportAccord summit in Beijing moved to Lausanne, Switzerland on April 19-24.

University Athletic Association of the Philippines postponed all sports events.