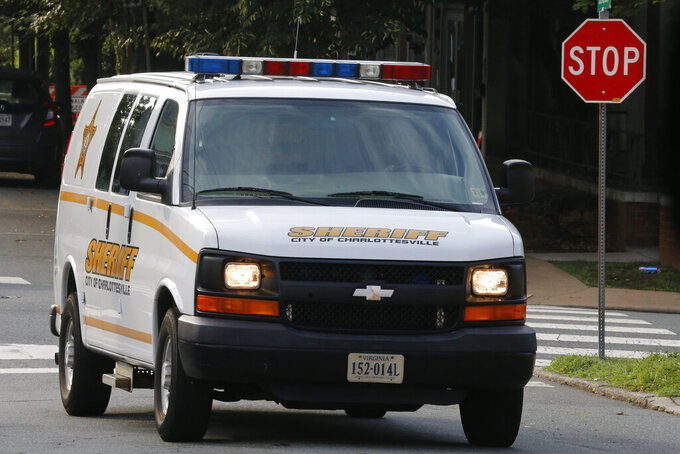 A Charlottesville Sheriff's van carrying James Alex Fields Jr., approaches the temporary General District Court courthouse in Charlottesville, Va., Monday, July 15, 2019. Fields is due to be sentenced in state court Monday, for his role in the Unite The Right rally in 2017. (AP Photo/Steve Helber) 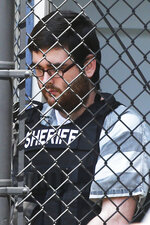 CHARLOTTESVILLE, Va. (AP) — An avowed white supremacist was sentenced to life in prison plus 419 years Monday for deliberately driving his car into a crowd of anti-racism protesters during a rally in Virginia, killing one woman and injuring dozens.

James Alex Fields Jr., 22, remained stoic as Circuit Court Judge Richard Moore formally imposed the recommendation of a state jury that convicted him in December of murder and malicious wounding charges for his actions in Charlottesville on Aug. 12, 2017.

Fields showed no visible emotion as victims of the car attack described severe physical and psychological injuries — broken bones, post-traumatic stress disorder, anxiety and depression — inflicted by Fields when he plowed his car into them.

"Hello, scum," said Jeanne "Star" Peterson, as she addressed Fields, seated about 20 feet from her at a table with his lawyers.

Peterson, who suffered a broken spine and a shattered right leg in the attack, told Fields he needs to stop "verbally abusing" his mother, referring to a recorded jail conversation in which Fields can be heard disparaging his mother.

Peterson said Fields' mother "tried her best" and it's not her fault her son "turned out to be a piece of feces."

Marcus Martin, who was captured in a dramatic photo as Fields' car struck him, said anger over what Fields did has permeated his life and affected his marriage.

"I blow up at the smallest things," Martin said, before ordering Fields to look at him.

"I want to talk to you, dude. I need you to look at me, buddy — look at me," he said. It was unclear whether Fields made eye contact with Martin.

He said closure will only come when he finds out "James Alex Fields is no longer on this Earth."

Martin was with several friends, including 32-year-old paralegal and civil rights activist Heather Heyer, when Fields rammed the crowd.

A photo of the car tossing Martin and other counterprotesters into the air won a Pulitzer Prize. In the photo, Martin wears a white shirt, khaki shorts, and red and white sneakers as he hangs above the ground behind the car.

Heyer's mother, Susan Bro, said in brief remarks to the judge that she hopes Fields finds "reclamation" but also hopes "he never sees the light of day outside of prison."

In his remarks before sentencing, Moore acknowledged Fields' long history of mental health issues, beginning when he was institutionalized several times as a child. But he said Fields had received psychological treatment throughout his life and his mental health issues do not excuse his crimes. The judge also said there was no evidence that Fields was being threatened or attacked when he drove into the counterprotesters.

"Mr. Fields, you had choices. We all have choices," Moore said. "You made the wrong ones and you caused great harm. ... You caused harm around the globe when people saw what you did."

Fields, an avowed white supremacist who kept a photo of Adolf Hitler on his bedside table, drove from his home in Maumee, Ohio, to attend the rally, which drew hundreds of white nationalists to Charlottesville to protest the planned removal of a statue of Confederate Gen. Robert E. Lee. The event also drew counterprotesters who demonstrated against the white nationalists.

Violent skirmishes between the two sides prompted police to declare an unlawful assembly and to order the groups to disband before the rally could even begin. Later that day, Fields plowed his car into a crowd of counterprotesters.

The event stirred racial tensions across the country. President Donald Trump sparked controversy when he blamed violence at the rally on "both sides," a statement that critics saw as a refusal to condemn racism.

During Fields' state trial, his attorneys said he was afraid after seeing violent skirmishes between white nationalists and counterprotesters. They also focused on his history of mental illness and traumatic childhood.

This story has been edited to correct that Fields was sentenced Monday on state, not federal charges.