Matt Kenseth back to NASCAR as Larson replacement at Ganassi 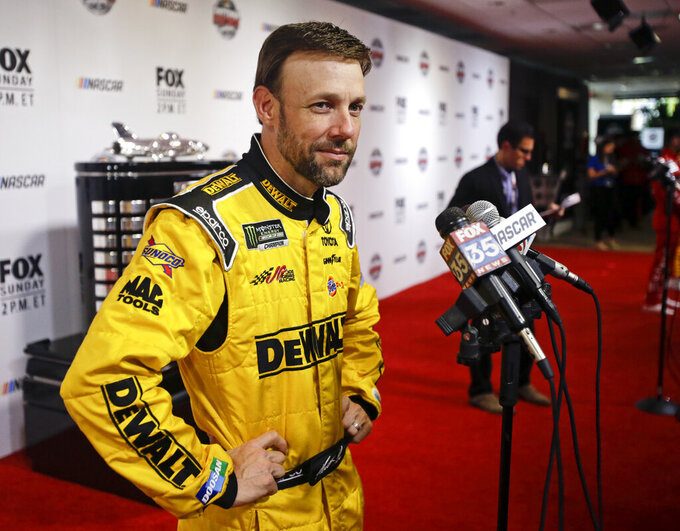 Larson lost his job two weeks ago for using a racial slur while competing in a virtual race. Although Ganassi developement driver Ross Chastain was assumed to be the leading contender to replace Larson in the No. 42 Chevrolet, the team instead announced Monday it will go with the two-time Daytona 500 winner.

“I think Matt gives us the best chance to win, run up front and compete for wins,” Ganassi told The Associated Press. “I’ve always gone with the mantra of trying to take the best driver available, and he’s the best driver available right now. And he brings something to our sponsors that they need right now. Stability. No baggage. Family man. Daytona 500 winner. Championship winner.”

Kenseth is in a class of drivers that includes Hall of Famers Dale Earnhardt, Jeff Gordon, Richard Petty and David Pearson as the only competitors to win a Cup Series championship, rookie of the year award and the Daytona 500.

“This was an unexpected opportunity for sure. I can’t say racing was even on my radar two weeks ago," Kenseth said. “After spending some time thinking about it and all the unique circumstances surrounding all of us right now, it just seemed the timing and the opportunity was perfect to come back.”

Ganassi said the team will petition NASCAR for a waiver to make Kenseth, the 2003 Cup champion, eligible to race for the title this season. NASCAR completed just four of its 36 races before the season was suspended due to the coronavirus pandemic.

Ganassi needed a clean start in the No. 42 after nearly every sponsor, including primary backers McDonald’s and Credit One Bank, backed away from Larson. The Japanese-American driver was popular, considered a rising star in the series and about to test free agency before he was fired.

Carl Edwards, a former teammate of Kenseth's at Roush, was also contacted about driving the No. 42 but declined to come out of retirement. As for Chastain, who filled in for Ryan Newman for three races before the season was suspended and has been patiently awaiting a full-time Cup ride, Ganassi said: “We've got plans for him.”

Kenseth retired from Joe Gibbs Racing after the 2017 season when Gibbs chose to give his seat to a younger driver. But he came back for 15 races to aid the rebuild at Roush Fenway Racing, his original team, in 2018. He turned 48 on March 10.

The move makes Kenseth teammates again with Kurt Busch — they were teammates at Roush early in their careers — and in a Chevrolet in the Cup Series for the first time for Kenseth.

Kenseth began his racing career in 1988 in a Camaro and made his debut in the NASCAR Southeast Series in 1994 behind the wheel of a Chevrolet, and continued racing Chevrolets in the Xfinity Series through the 2001 season.

“I know I have a lot of work ahead of me to get up to speed in a relatively short period of time, but I’m looking forward to the challenge," Kenseth said. "I started my career in a Camaro and I can’t wait to finally race a Chevy in the Cup Series. I also need to thank Chip and all his partners for this opportunity. Hopefully we will be on the track soon.”

Kenseth drove Fords for Roush and Toyotas for Gibbs. He was Cup rookie of the year in 2000 driving for Roush, where he won his only championship. He has 39 career victories and won the Daytona 500 in 2009 and 2012.

Kenseth joined Gibbs in 2013 and was an immediate title contender. He qualified for the playoffs — which began the year after he won the Cup title with just one win — in every season he was eligible but one.

Kenseth won 15 races in five full seasons driving for Gibbs and was runner-up for the title in 2013, the year he won seven races.

In choosing Kenseth, Ganassi gives his partners a low-key driver with a winning record who typically avoids controversy. He was suspended two races by NASCAR in 2015 for intentionally wrecking Joey Logano in a heated championship battle.

“Throughout my time in NASCAR, I have always admired the way Matt Kenseth raced," Ganassi said. "He has proven to be a consistent winner, strong competitor, and respectful driver, and I’m glad we are able to add another NASCAR champion to the team for the remainder of this season.”

Busch won the 2004 championship in the first year of the playoff format to give Roush back-to-back titles, and now there are two former champions in the Ganassi stable.