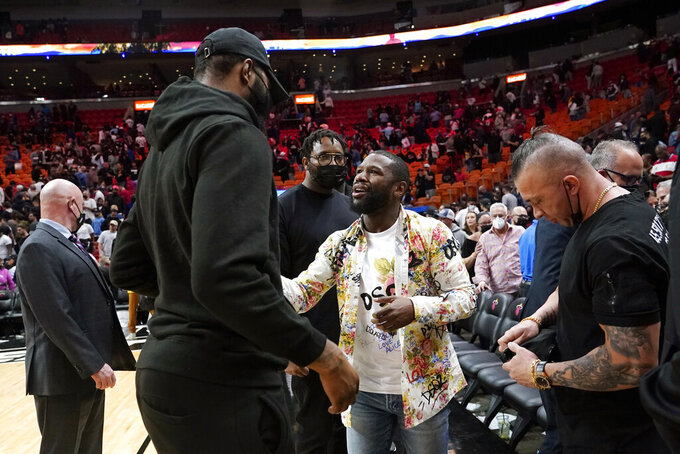 Floyd Mayweather Jr. is ready to put The Money into NASCAR.

The long-delayed debut of The Money Team Racing team is set for the Daytona 500 later this month, with Kaz Grala as the driver. The team secured sponsorship from sunglass company Pit Viper and Grala will drive the No. 50 Chevrolet for the retired boxing great.

Mayweather is the latest A-lister on the grid and joins Michael Jordan and Pitbull as celebrities over the last two years who have become NASCAR team owners. UFC President Dana White struck a marketing partnership deal this week with Pitbull's Trackhouse Racing starting with the exhibition Clash in Los Angeles.

Mayweather’s team, though, does not have a charter that would guarantee it a spot in the field and will run Daytona as an open car. That means with some 42 teams hoping to qualify for a spot in the 40-car field, Grala will have to race his way into the field.

“I love fast cars and I love to compete. I know NASCAR will not be easy, but anything easy isn’t worth doing to me,” Mayweather said. “With that being said, this move into auto racing seems to be a perfect fit for the Mayweather brand.”

Team general manager William Auchmoody told The Associated Press on Tuesday the plan is for TMTR to run four races beyond Daytona with an emphasis on road courses. Auchmoody said the team would like to run up to 15 races.

Tony Eury Jr., a former crew chief for Dale Earnhardt Jr., will call the shots for TMTR. StarCom Racing’s Michael and Matt Kohler and Bill Woehlemann hold a small stake in the team.

Mayweather, who turns 45 this month, retired from competitive boxing with a 50-0 record and returned to the ring last July to fight YouTube personality Logan Paul in an exhibition bout. Mayweather won titles in the super-featherweight, lightweight, super-lightweight, welterweight and super-welterweight divisions.

Mayweather had talked about launching a NASCAR team for years and a tweet showcasing the TMT logo was posted on March 21, 2020. There was no other social media activity until Monday when a photo of car with the caption “The wait is almost over!” was posted.

“We had some sponsorships secured going into the 2020 season,” Auchmoody said. “The pandemic hit and the sponsor decided to wait.”

“He loves cars,” he said. “I met him a couple of years ago and had the conversation, man, you should check NASCAR out. He started watching it a little bit and next thing you know, I’m in Las Vegas and we’re hashing out the details of what it would look like to get involved in NASCAR.”

The 23-year-old Grala has four career Cup Series starts and finished 28th in last season’s Daytona 500 driving for Kaulig Racing. He won the season-opening Truck Series race in 2017 at Daytona.

“I know Floyd is here to win, and I absolutely feel that everyone involved in this program is capable of making that happen,” Grala said. “We know we will need some time to grow together as a new organization, but I couldn’t be more thrilled to be a part of building this team from the ground up.”