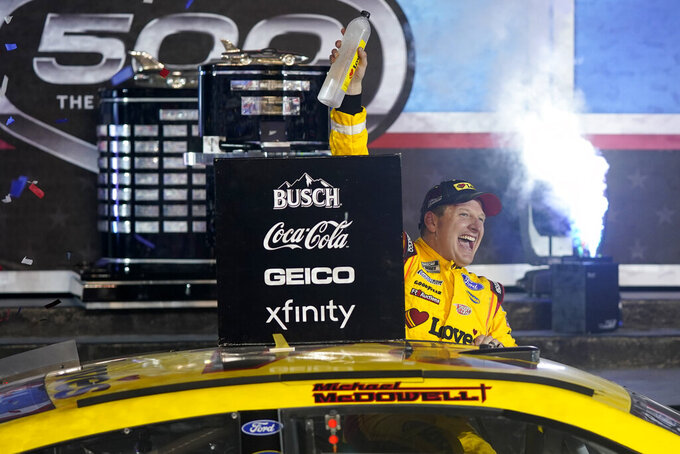 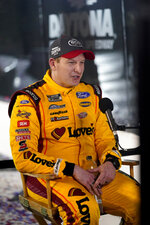 DAYTONA BEACH, Fla. (AP) — Michael McDowell was best known for years as the guy who barrel-rolled eight times at Texas while trying to qualify for just the second race of his Cup Series career.

He'd driven through the remnants of an oil spill when McDowell's car made a hard right turn into the wall. The car rebounded, flipped o n its roof and went airborne for eight rolls before the flaming wreckage finally came to a stop on its wheels.

“It’s just one of those things that happened,” McDowell said. “But you definitely hope that people would know you for something better than that.”

It took 13 years for him to change the narrative: McDowel l is now a Daytona 500 champion.

The journeyman earned the first win of his career — he was 0-357 before Daytona — by zipping past two crashing cars on the final lap. McDowell led for less than a mile in the wee hours Monday morning but it was all he needed to validate a career spent driving inferior cars.

Daytona is unlike any race on NASCAR's schedule in that underdogs have a chance if they can make it to the finish. It takes understanding the nuances of superspeedway racing — managing the draft, knowing who to push and how to do it, and using instinct to plot strategy at almost 200 mph.

McDowell has had the hang of it since at least 2013, when he scored his first career top-10 finish at Daytona. He has been a fixture near the front of the field since, particularly after he moved to Front Row Motorsports in 2018.

Although FRM is considered one of NASCAR's third-tier teams, it has a strong program for superspeedways and road courses, circuits that somewhat level the playing field. In four Daytona 500s driving the No. 34 Ford, McDowell finished fifth, ninth, 14th and, finally, first.

“This is definitely no fluke,” said three-time Daytona 500 winner Denny Hamlin. “I’ve said many times this is a skill game. He’s got the skill set to win these, and he finally got it done.”

The victory was just the third in 17 years for Front Row and owner Bob Jenkins. David Ragan won FRM's first race, in 2013 at Talladega Superspeedway, and Chris Buescher won at Pocono in 2016.

Jenkins doesn't think the sporadic success is indicative of the team he's built.

“I know the average fan is surprised when we win a race, but it never surprises me,” Jenkins said. "It’s taken a long time to get our third win and our first Daytona 500 win, but people don’t realize this is our third top-five in the Daytona 500. You want to win championships, but you’ve got to win races first.”

McDowell earlier this month said he doubted FRM could make the 16-car playoffs on points, so the priority had been earning an automatic berth via a race win. The schedule this year has a NASCAR-high seven road courses — the first is this Sunday at Daytona — and four superspeedways, which theoretically gave FRM a fighting chance to compete against NASCAR's elite.

FRM now has its first playoff berth in team history. More important, crew chief Drew Blickensderfer has 25 weeks to prepare for the championship rounds. He can overhaul his strategy to fixate less on decent finishes and instead aggressively chase stage points and victories in hopes of a deeper playoff run.

“All that matters right now is winning the stage or winning the race for us,” Blickensderfer said. "In the past, if you’re running at Pocono and you’re running seventh or eighth like we were last year, we were super happy to finish there.

"But right now seventh or eighth doesn’t do any better for us than 15th. So why not take a gamble and see if you can either steal another (win) or you can put yourself up in position to at least get some more points.”

McDowell will have a different approach to racing the rest of this season. He certainly wants to win more races, but he's got his Daytona 500 trophy now and can focus on helping FRM's growth.

“I think that you always have the fire and when you win that fire gets deeper, but we all know that’s not an every week thing for us and our race team right now,” McDowell said. "We know that on 26 of the racetracks, we’ll be happy to be in that top 10.

“I think this definitely gives us a lot of confidence. You always want more, but I am so thankful that I am not going to go my Cup career without a win. It’s such a relief to know that I won’t go 400 starts without a win. I’ve always said I want one, and I’ve got one now and obviously we want two, right?”