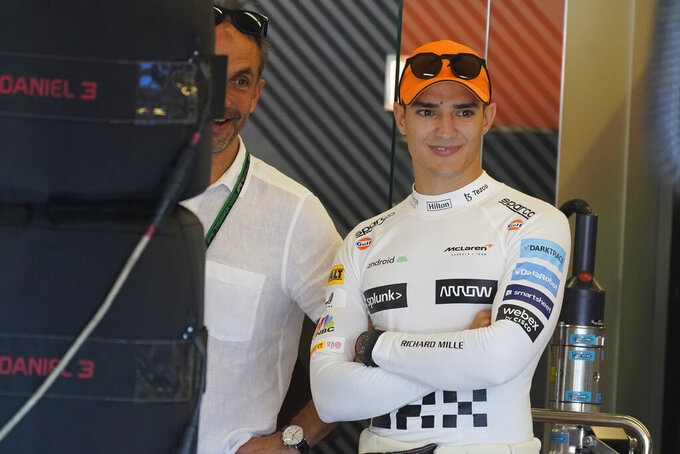 FILE - McLaren test driver Alex Palou, of Spain, waits in the garage before the first practice session for the Formula One U.S. Grand Prix auto race at Circuit of the Americas, Friday, Oct. 21, 2022, in Austin, Texas. IndyCar driver Alex Palou will be the reserve driver next season for McLaren in Formula One, the first step in his 2024 move from Chip Ganassi Racing to McLaren in either IndyCar or F1. (AP Photo/Darron Cummings, File)

Alex Palou was named a Formula One reserve driver for McLaren Racing on Thursday, confirming the end of a prolonged battle for the IndyCar champion and the F1 team.

The Spaniard, who won the 2021 IndyCar championship for Chip Ganassi Racing, last July said he was declining to return to Ganassi next year and instead would drive for McLaren.

Ganassi held an option on 2023 for Palou, who wanted to move to McLaren for a shot at motorsports' highest level. The fight for the driver dragged into September through mediation, where it was decided that Palou would finish his contract and also be allowed to do F1 opportunities with McLaren.

The 25-year-old Palou has since tested for McLaren and he made his F1 debut at the United States Grand Prix in October when he drove the first practice session.

In his role as a reserve driver, Palou will support McLaren whenever it does not conflict with his responsibilities in the final year of his IndyCar contract with Ganassi. He will officially move to McLaren at the end of the upcoming IndyCar season and drive either for Arrow McLaren SP in IndyCar or move completely into an F1 role.

“I’m excited to be part of the McLaren team as one of their reserve drivers in 2023," Palou said. "I can’t wait for the involvement with next year’s car. I look forward to continuing my development as a driver and I appreciate the trust McLaren have in me with this new role next year.”

Palou has four wins and 15 podiums through three IndyCar seasons and is the only Spaniard to win the championship.

“The team are pleased to have Alex on board as one of our reserve drivers for next season," said Andreas Seidl, McLaren team principal. “He impressed with his FP1 session in Austin and his driver development tests this year.”