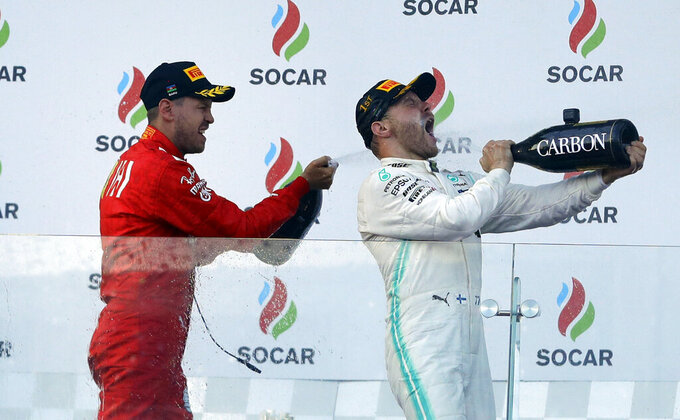 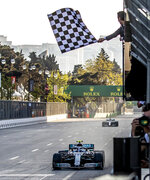 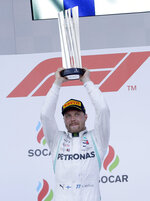 When Valtteri Bottas beat Lewis Hamilton to win the Azerbaijan Grand Prix on Sunday, it was the fourth Mercedes one-two in as many races, the best start to a season by a two-car team in Formula One history. Ferrari can barely keep up.

It's been three years since the title was last decided between Mercedes teammates. Back then, Nico Rosberg bested Hamilton in a titanic ontrack clash which became a bitter personal feud.

This time round, Hamilton and Bottas are full of praise — so far — for each other's driving.

"Today he was very fair in giving me space and after that he was faultless, so he truly deserved the win," Hamilton said of the man who leads him in the standings by one point. "It's going to take some really great performances from both of us to outperform each other and that's how it should be."

When they qualified on the front row, Hamilton said he and Bottas talked over "like gentlemen" how best to fight for the lead without risking a collision or handing Ferrari's Sebastian Vettel an overtaking opportunity. If anything, Hamilton added, he was "too friendly" to Bottas at turn one — a far cry from the collisions and recriminations of 2016.

Bottas is in the form of his life, with two of his five career wins coming this season.

"It obviously means a lot. It's incredible as a team the kind of level we are performing at now," Bottas said. "It's only my fifth win so of course it feels great."

It came a year after the Finn was agonizingly close to victory in Azerbaijan before a puncture forced him to retire from the lead and handed the win to Hamilton.

Vettel, second to Hamilton in the championship in 2017 and 2018, was third as Ferrari failed to challenge Mercedes on a track that had been widely considered to favor the Italian team.

"It was never really working. I was uncomfortable, inconsistent, I couldn't get a feel for the car," Vettel said of his early stint on soft tires. He added that later in the race, "we had some pace to at least go with them, sometimes put a bit of pressure," but Bottas and Hamilton already had a comfortable lead.

Max Verstappen was fourth for Red Bull, while Charles Leclerc took fifth for Ferrari after a crash in qualifying left him starting eighth before he fought through the field.

Leclerc also claimed the bonus point for fastest lap. The Monaco driver took advantage of a big gap behind him to take an essentially free pit-stop for fresh tires and go on a qualifying-style final run to set the fastest time.

Sergio Perez was sixth for Racing Point, while Carlos Sainz and Lando Norris were seventh and eighth in McLaren's best two-car finish in more than a year. Racing Point's Lance Stroll was ninth, and Kimi Raikkonen claimed 10th for Alfa Romeo after starting from the pit line when he was disqualified from Saturday qualifying.

Baku hosted unpredictable and crash-strewn races in 2017 and 2018, and a dramatic qualifying session on Saturday was decided by the finest of margins.

A dry contest decided largely by pit strategy and car setups, there were few incidents of note after Bottas fended off Hamilton into the second corner.

After a poor start, Leclerc swept past a string of slower cars before overtaking Max Verstappen, who complained of poor handling in his Red Bull. When Leclerc took the lead on old tires after other cars pitted, an unlikely podium briefly seemed possible for the driver who dubbed himself "useless" after crashing in qualifying.

Had the safety car come out, it could have saved Leclerc's race, but his challenge faded with his tires. Bottas, Hamilton and Vettel reeled him in before all three passed him into turn one on successive laps.

When there was a collision, it was more farce than Formula One. Daniel Ricciardo and Daniil Kvyat fought for position and both ran off the road, before Ricciardo reversed into the Russian as he tried to rejoin. That earned the Australian a three-place grid penalty for the Spanish Grand Prix on May 12.

"I'll buy him a rear view mirror for the next race," Kvyat said.

Both cars limped to the pits to retire, meaning there was no impact on the leaders.

The race was briefly neutralized under virtual safety car conditions on lap 40 when Pierre Gasly's Red Bull broke down in sixth position with a driveshaft problem, giving Bottas more help to protect his lead.