Mercedes one-two in practice at Imola, problems for Red Bull 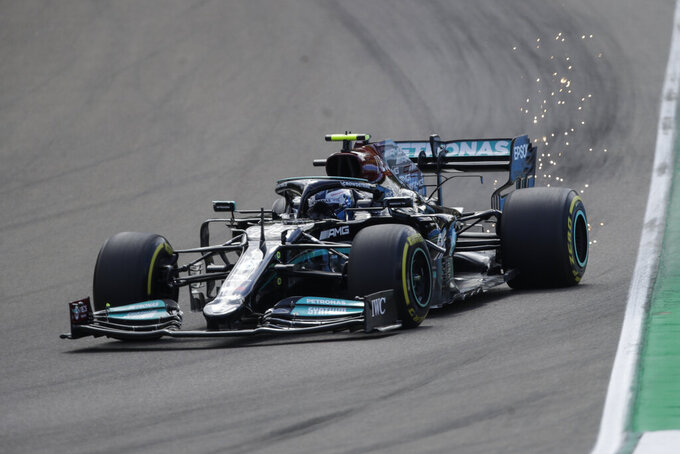 Red Bull was favored heading to Imola but fortunes swung in Mercedes' favor as the reigning championship team managed a one-two in both practices while its rival finished each session with just one driver.

Valtteri Bottas was fastest in both, edging Lewis Hamilton by just .010 seconds in the second practice and .041 in the first.

“The weekend has started in a positive way, I’m much happier with the balance of the car,” Bottas said. "The car feels better, we still have the same type of issues as in Bahrain but less so.

"Still not perfect but we are only on event two out of 23 this season so hopefully we have time to fix it ... We still don’t think we are the fastest car and we really need to improve on that on Saturday.”

Pierre Gasly, who briefly separated the two Mercedes drivers, was .078 slower than Bottas in the second practice.

It is his AlphaTauri team’s home race, with its Faenza base located 15 kilometers from the track

“The team have worked really hard to try and understand what happened at the last race, where we were weak and how we could tweak the setup, but the track has come to our direction too,” Hamilton said.

“We have good pace but we have not seen the best from Red Bull yet because they have had messy sessions. It will be interesting to see tomorrow how quick they are.”

Red Bull driver Max Verstappen, who looks set to be Hamilton’s closest rival this season, had a problem with his car early in the second practice and his session ended abruptly 10 minutes in.

“It looks like the drive shaft has given away. We’re just trying to understand what has happened," Red Bull team principal Christian Horner said.

“We will be inspecting all the other parts as well. The kerbs are pretty aggressive here so we just need to understand what has happened.”

Verstappen had been third-fastest in the morning, .058 behind Bottas.

It was the latest in a long run of bad luck for the 23-year-old in Italy. Verstappen has never finished an F1 race in the country higher than fifth and retired in all three events last year at Monza, Mugello and Imola.

“I like Italy, the food is good and I enjoy being here but the driving part is not the luckiest," Verstappen said. “We just have to look at what we can do better tomorrow.

"Of course it would have been better to have the session but I don’t think missing running in FP2 is the end of the world as we know what we need to do tomorrow. We just have to focus on ourselves and make sure we get the best out of our package.”

Verstappen’s teammate Sergio Perez failed to finish the morning practice after an incident with Esteban Ocon heading into the Villeneuve chicane.

The rear left tire of Perez’s car was ripped off and the front of Ocon’s Alpine suffered heavy damage after the pair came together.

That led to a temporary suspension of the session with about 22 minutes left. The red flags came out again shortly after the end of the session as Nikita Mazepin spun off and crashed into the barriers at the pit lane exit.

There were more red flags in the afternoon forcing the session to come to a premature end, approximately four minutes before schedule, after Charles Leclerc crashed his Ferrari into the barriers.

The Ferrari drivers, Carlos Sainz and Leclerc, completed the top five in second practice. There was less than one second separating first and ninth.

There is a third and final practice session on Saturday ahead of qualifying.

The Emilia-Romagna GP is the second race of the Formula One season. Hamilton won the opener in Bahrain last month, just ahead of Verstappen after a thrilling duel.