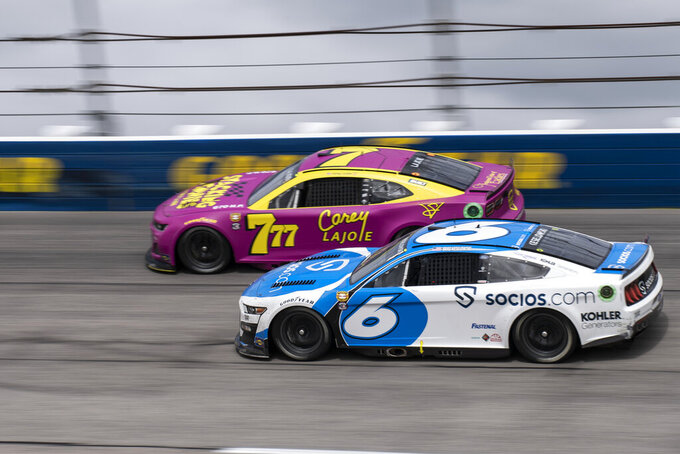 DARLINGTON, S.C. (AP) — The NASCAR Cup Series playoff grid is filling up fast and the dwindling number of spots may lead to more of the aggressive driving that grabbed headlines over the weekend at Darlington Raceway.

Joey Logano sent leader William Byron into the wall on the next-to-last lap and went on to become the 10th different winner in the first 12 races of the season, locking up one of the 16 playoff spots with the victory.

“I did what I had to do," Logano said. “I had to win the race. It was very important to win and get into the playoffs.”

Maybe more this season than ever before.

It is the second straight season 10 drivers have posted victories by the season's 12th race. But it is only the third time it's happened since NASCAR expanded the playoffs from 12 cars to 16 before the 2014 season.

NASCAR saves a spot for the regular season's points champion if he doesn't have a win.

“Yeah, it's something you think about,” said Erik Jones, who is 16th in points after getting knocked out of Darlington in a 12-car wreck with 25 laps left.

“We're going to keep doing a good job with the points,” Jones said. “But you see different guys winning and you want to be one of them to get in.”

A year ago, there were 14 drivers with wins who made the playoffs, tied for the most ever since the field expanded. The wild card this year is the Next Gen car, which has led to stronger, more competitive races and left even the most powerful programs scrambling to find an edge.

Logano's Team Penske crew chief, Paul Wolfe, said his Ford has has had difficulty matching the speed of the Chevrolets and Toyotas, which had combined for nine of 12 wins this season until Darlington.

“It was good for us to show we had speed in qualifying and back it up in the race,” Wolfe said. “So, yeah, it's going to be tough to win races because a lot of guys have speed right now."

Wolfe, however, doesn't see traditionally dominant programs like Hendrick Motorsports, Joe Gibbs Racing or Stewart-Haas Racing hitting on something and watching racers like Kyle Larson, Kevin Harvick or Logano run off several victories the rest of the way.

Larson won 10 races in 2021 for Hendrick on the way to the championship. Kevin Harvick had eight wins for Stewart-Haas in 2020 in making the final eight.

This season, only Ross Chastain and Byron have multiple wins. Chastain took the checkered flag at the Circuit of the Americas and Talladega. Byron won at Atlanta and Martinsville.

“I expect (winning) to get tougher as we go and everyone figures the car out,” Wolfe said.

Typical playoff participants and past Cup Series champions like Martin Truex Jr., Brad Keselowski and Harvick remain outside looking in with the regular season's halfway point ahead next week in Kansas.

That likely means harder racing and aggressive moves at the end like Logano's ram-and-run at Darlington. Logano said Byron got the lead on a final restart by knocking him into the wall. So when Logano closed in at the end, there was no doubt what the 2018 NASCAR champion would do.

Byron left and angry and bewildered. He dismissed Logano's contention of retribution, calling him a “moron” and an “idiot.”

“I've been called a lot worse,” Logano said, grinning from ear to ear after locking up a playoff spot for the 10th time in 11 seasons.

Keselowski, in his first season since moving from Team Penske to Roush Fenway Racing, isn't panicking yet. He said he believes there is ample opportunity left to secure a playoff spot, no matter how much scrambling teams are doing to mold their new car into a winner.

“It seems like every year we're having that discussion,” said Keselowski, who was knocked out at Darlington in a wreck. “Ultimately, time will tell. But I still think somewhere between 13 winners, maybe 15 winners, but not 16.”