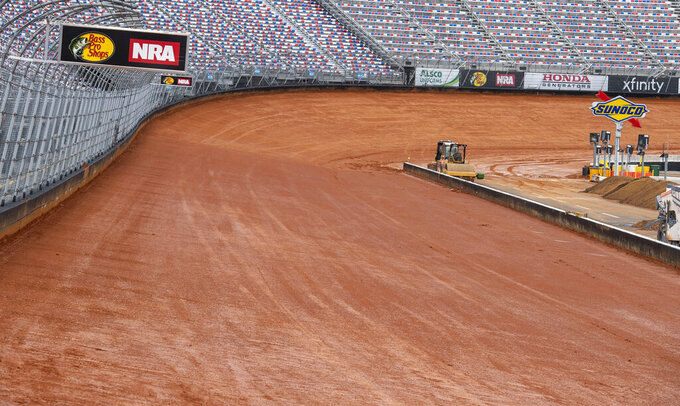 FILE - Bristol Motor Speedway has transformed the half-mile concrete track into a dirt track, in Bristol Tenn., in this Friday, Feb. 19, 2021, file photo. Bristol, once one of the toughest tickets in sports, trucked 23,000 cubic yards of dirt into its famed bullring to transform the facility and host NASCAR's first Cup race on dirt in 70 years on Sunday, March 28. (David Crigger/Bristol Herald Courier via AP, File)

Don’t wear white to Bristol Motor Speedway this weekend. Pack a pair of goggles and be prepared to get really dirty.

Bristol has trucked 23,000 cubic yards of dirt into its famed bullring to host NASCAR's first Cup Series race on literal earth since 1970. This wild experiment was pushed by broadcast partner Fox at the same time NASCAR was looking to diversify its uninspiring schedule.

Speedway Motorsports said it was game — elbowing out Tony Stewart and his well-established Eldora Speedway dirt track in Ohio — and offered up “The Last Great Coliseum” for Sunday's adventure.

Once one of the toughest tickets in all sports with a 55-race sellout streak from 1982 through 2010, Bristol lost some of its luster when its spring race date bounced all over the NASCAR calendar. Fans grew tired of expensive local hotel rates and unpredictable weather — it snowed during the 2006 race weekend — but a dirt race gives Bristol a chance to re-establish itself as a bucket list event.

The buzz hasn't stopped since the race was announced last year, and Bristol, which hosted the World of Outlaws on dirt in 2000 and 2001, began the enormous project.

Steve Swift, the senior vice president of operations and development at Speedway Motorsports, traveled to 18 different dirt sites in a 150-mile radius to find the perfect native, red Tennessee clay for the job. Swift said he sent the samples to “a gentleman out in California by the nickname of Dr. Dirt” for analysis.

Ed Davis, a scientist/farmer/dirt racing enthusiast at S&E Organic Farms in Bakersfield, California, whittled the samples down to three for this weekend's race.

A layer of sawdust was spread over the 0.533-mile concrete oval and then 2,300 truckloads of dirt were dumped on the track. The next layer is soil from the Outlaws races two decades ago, followed by dirt from a campground near the track and a final top layer from nearby Bluff City.

The track is done and Bristol successfully hosted late model racing all last week as a tune-up for the event. The Bristol Dirt Nationals drew a handful of current Cup drivers who wanted to get a look at the surface and they included Kyle Larson, one of the winningest dirt racers in the country.

Larson was pleasantly surprised by the track because a weekend of racing at The Dirt Track at Charlotte, another Speedway Motorsports property, last November was a dusty disaster.

“I get to race on a lot of different track surfaces and dirt and the orange clay is always hit or miss. It's either good, or it's really bad,” Larson said. "How Charlotte was last year, I think a lot of people were worried. But Bristol, the car I raced last week, once they let the track get slick and start getting dark and black, it really widened the groove out and the pace slowed down and the racing got really good.

“If they continue to let the track get slick, I think it will be a really good race this weekend.”

That's easy for Larson to say because of his extensive dirt racing background, and same for Christopher Bell and a handful of others. But the experience level varies greatly throughout the Cup field from professionals to drivers who have never raced on dirt at all.

Seven full-time Cup drivers have entered Saturday night's Truck Series race for extra track time. Kevin Harvick. who last raced a truck in 2015, is one of them.

“I would never decide to put dirt on any racetrack, ever," Harvick said. "It’s not something I grew up doing, nor something that I’ve enjoyed when I’ve done it along the way.

“But I can tell you it’s probably the single best event that we will do this year just because of the fact that it’s so different, so far outside the box, and I think the anticipation leading up to it has been a lot of fun for all of us.”

Three ringers have entered the Cup race because of their experience on dirt. Stewart Friesen, a Truck Series regular, will make his Cup debut alongside newcomers Chris Windom, the USAC champion, and sprint car driver Shane Golobic.

NASCAR will hold a pair of Friday night practice sessions, followed by Saturday heat races to determine the starting lineup. NASCAR also decided pit stops will be controlled and teams will only be permitted to change tires and fuel at the stage breaks — a ruling that will keep most pit crews at home so that fabricators and mechanics can take those roster spots to attend to damage done during the first traditional three-day race weekend since the start of the pandemic.

The entire field got a virtual look at the track Wednesday night in an online iRacing event won by William Byron. Bell said the video version was not realistic to the conditions drivers will face Sunday.

In fact, if its anything like the conditions in the iRacing event, Bell believes Bristol could be a disaster.

“We can’t have those conditions. And if it gets super dry, it’s going to be really dusty. I don’t think the track conditions were realistic.

It is still March in the Tennessee mountains and the current weather forecast calls for 100% rain on Sunday. NASCAR won't race in the rain, even on a dirt surface, but Bell said a little water won't do much harm. A downpour would be more difficult to overcome, but no matter the track conditions, the quality of racing will still be what determines if dirt racing was a good idea for NASCAR.

“A great finish is necessary for it to be considered a great race and we know it’s going to be a full field and we know there’s going to be bumping and banging,” Bell said. "I just hope it’s not a demolition derby.”