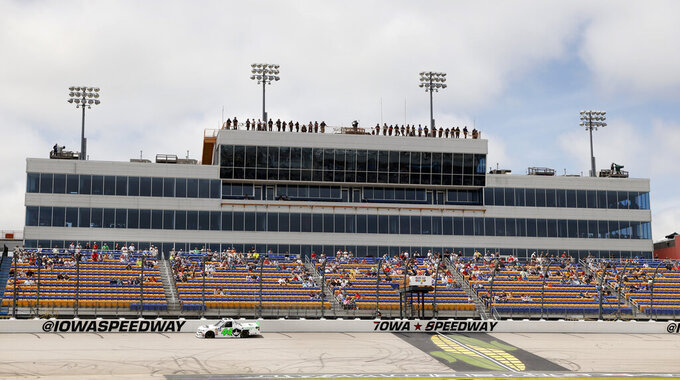 NASCAR suspended Johnny Sauter for one race for intentionally ramming into Austin Hill during the Truck Series race in Iowa.

The sport's sanctioning body said Tuesday that Sauter will miss this weekend's race at Gateway, outside St. Louis. His postseason eligibility will not be affected.

Hill nicked the back of Sauter's truck at Iowa Speedway, sending Sauter into the wall and drawing a caution flag. While Sunday's race was still under yellow, Sauter got his truck spun around straight before speeding up and driving right into the back of Hill's truck.

NASCAR parked Sauter for the rest of the race. Hill, who had tangled with Sauter in an earlier race at Texas, finished 12th.

"We look back at the history of everything we've done and try to react with the precedents that we've set and then obviously tailoring those to the situation that we have at hand," said Scott Miller, NASCAR senior vice president of competition. "In this case, we felt like his actions certainly warranted being sat down for an event, but it felt a little too harsh to take him straight out of the championship, so we think we landed on what we feel is fair and a deterrent."

A representative for Sauter's ThorSport Racing team told NASCAR.com the organization had not made a decision regarding a possible appeal.

Hill is seventh in the standings, Sauter is eighth.

Brett Moffitt was declared the race winner at Iowa after Ross Chastain's truck, which cleared the line first, failed a post-race inspection. Chastain's team has appealed that ruling.