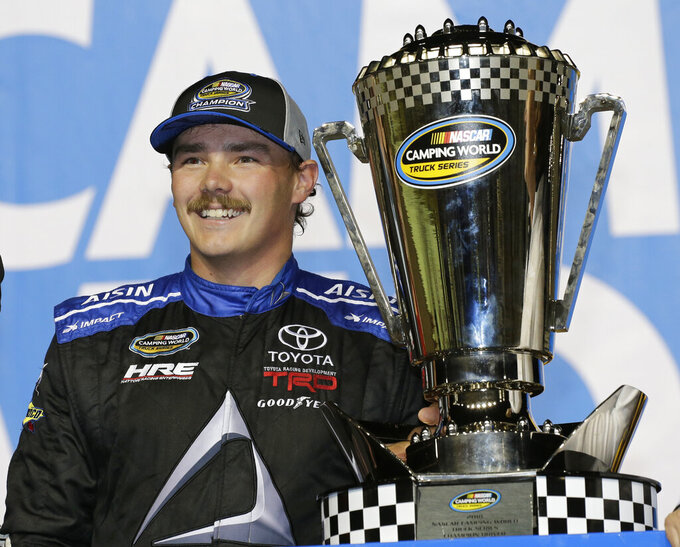 FILE - In this Nov. 16, 2018, file photo, Brett Moffitt stands with his trophy in Victory Lane after winning the NASCAR Truck Series auto racing season championship, at Homestead-Miami Speedway in Homestead, Fla. After winning a NASCAR Truck series title in 2018, Moffitt is still searching for his first win this season. (AP Photo/Terry Renna, File)

Moffitt soon found himself out of a job anyway.

For the third time in his career, Moffitt lost his ride because of funding concerns. But after finally living up to his potential in 2018 — despite spending much of it piecing together sponsors on a weekly basis — he was able to land a ride with GMS Racing for 2019.

"It's tough. It's disheartening, especially when you go out and win a championship, to find out you don't have a job," Moffitt said. This "is the best position I've ever been in, with a proven team that's going to be around and put their best effort forward all the time."

Moffitt, 26, was the youngest driver to ever win a K&N Pro Series race when he took first at South Boston Speedway in 2009. Moffitt would spend five full seasons in that series, winning 10 times in 62 starts, before landing a partial Cup Series ride in the No. 66 Toyota in 2014.

Moffitt, who grew up about 40 miles from the Iowa Speedway in Grimes, would go on to be named the Cup Rookie of the Year in 2015 at the age of 23. Still, he spent the next three seasons making spot starts across NASCAR's top three series before landing a full-time job with Hattori Racing Enterprises for 2018.

Once Moffitt got behind the wheel of a truck that could actually compete for wins, a breakout season soon followed.

Moffitt built momentum by winning at Iowa and Chicagoland, and three races later he won again at Michigan. Moffitt closed the season with four consecutive top-three finishes, and he clinched the title by winning the last two playoff races.

Moffitt's sponsorship woes might have kept him on the sidelines for 2019, but GMS signed him a little over a month before the season began. Moffitt is currently third in the standings, 33 points behind leader Grant Enfinger.

"It makes you upset when you have the ability to get the job done. You just don't have the funding," Moffitt said. "There are a lot of people in that situation. It's not just me. It's unfortunate that that's where it's at right now, but all I can do is just keeping doing the best I can and make the most out of every opportunity that I get."

Moffitt said he had talks with Cup and Xfinity teams in the offseason. But Moffitt didn't want to spend another season in a non-competitive ride — after all, he posted just one top-10 finish in 45 Cup starts from 2014-17 — and he felt that GMS gave him the best chance to win another championship.

Though Moffitt has yet to win in 2019, he has a truck with the speed to do so. Moffitt's No. 24 Chevrolet has notched three podium finishes and a pole in eight starts.

"It's all about staying relevant. Your name is still out there when you're running in the back in not great equipment. But I think it's important to show what you can potentially do," Moffitt said.

The Truck Series next races June 7 at Texas and the following week at Iowa.