No universal playbook for virus testing in pro sports 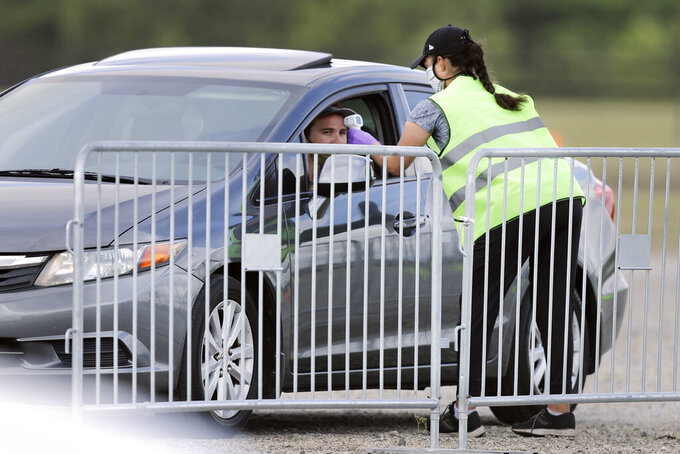 A worker takes the temperature of a person arriving at Darlington Raceway before the Real Heroes 400 NASCAR Cup Series auto race Sunday, May 17, 2020, in Darlington, S.C. NASCAR, which has been idle since March 8 because of the coronavirus pandemic, makes its return at the track Sunday. (AP Photo/Brynn Anderson)

JACKSONVILLE, Fla. (AP) — There is no universal playbook for coronavirus testing in professional sports.

Protocols and procedures, guidelines and handbooks -- they could be as different as rulebooks. There’s plenty of common ground, though, which explains why executives and doctors from various leagues have consulted with each other while moving closer to at least a partial return to competition amid a pandemic.

League officials essentially are choosing the best option from a list of bad choices, and it comes down to how much risk are they willing to take.

“When you look at the people that run these other sports, these are all really smart guys,” UFC President Dana White said. “And nobody knows their business better than they do.

“They have to literally sit down and break through item by item on what they need to do and how they need to make it as safe as they possibly can. And they’ll figure it out.”

There already have been several approaches in the United States:

— UFC took blood (antibody test) or swabbed nostrils (viral test) for roughly 1,200 people during its weeklong stay in Jacksonville, Florida, this month — part of the mixed martial arts behemoth’s health and safety protocols. It took minutes for antibody results and as little as a few hours for viral test results.

— NASCAR logged temperatures of about 900 people Sunday at its return race in Darlington, South Carolina.

— The NBA hasn’t implemented a full-scale testing program for its 30 teams; a little more than half have reopened practice facilities for voluntary workouts. The NFL, NHL, tennis, golf and other sports are working on their procedures.

— South Korea’s top soccer league, the K-League, tested 1,100 players and staff at the end of April, and all came back negative, clearing the way to begin its season. South Korean baseball, the KBO, screens players and coaches for fevers.

— Australia’s National Rugby League will mandate vaccines -- not for the coronavirus, but for the seasonal flu. It’s part of Queenland’s contentious “no-jab, no-play” policy that means players who skip an annual flu shot won’t be permitted to play north of the Queensland-New South Wales border.

— The English Premier League conducted its first wave of COVID-19 testing this week and found six of 748 people infected. Those six have to self-isolate for a week.

UFC tested each of its employees before reopening its headquarters Monday. White said UFC will again test everyone before its next fights, May 30 in either Las Vegas or Arizona.

The UFC spent, on average, $125 per test; that added up to around $150,000 in Jacksonville. White was tested three times partly because he walked around without a mask and was in close contact with fighters.

That price tag is peanuts for a multi-billion-dollar business that reportedly notched more than 700,000 pay-per-view buys for UFC 249 — generating as much as $45 million in revenue for the first major sporting event in the United States during the pandemic.

UFC has far fewer competitors than other leagues, which means more manageable testing and contact tracing and easier social-distancing.

NASCAR would have to spend more than $2 million to test everyone it deems essential before each of its 20 races over the next month, but decided it didn’t need to because drivers are isolated and pit crews already wear protective equipment.

Other sports have difficult decisions to make.

Tennis and golf tournaments often involve more than 100 entrants from around the globe. NFL teams head to training camp with 90 players, plus about 20 coaches and dozens more support personnel. MLB suggested 50-man rosters for its season.

Leagues seem hesitant to adopt constant testing measures outside of temperature checks, especially if it creates the perception they are taking supplies that could be earmarked for healthcare workers or the general public.

Still, television revenue -- no one is expecting full stands anytime soon -- is the driving force to return to competition. And most agree that some level of testing is key.

“The overall picture is that there’s a lot to be desired from testing to use it as a definitive indicator that everybody’s safe,” said Stuart Miller, the senior executive director of the International Tennis Federation, who is overseeing its COVID-19 advisory group and return-to-tennis efforts.

“There’s a number of risks from just the testing side,” Miller added.

In UFC, fighter Jacaré Souza and two of his cornermen tested positive for COVID-19 a day before a bout. They were sent home.

The UFC, which said three trio were the only ones who tested positive, barely blinked. And the show went on.

How sports leagues respond to a positive test is a key component to resuming competition. Will they continue play if a superstar tests positive? What if several teammates are infected? Will there be a threshold that prompts another league-wide shutdown?

“You just have to be willing to work hard enough, spend some money and come up with solutions,” White said.