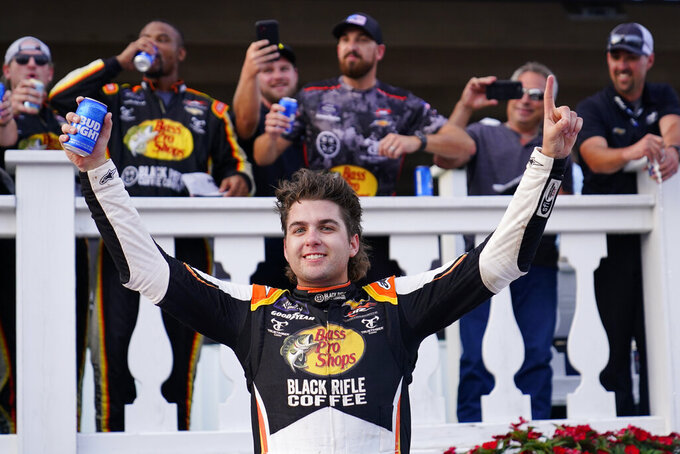 Noah Gragson finally earned a promotion to NASCAR's top level and will drive for Petty GMS next season.

Gragson will replace Ty Dillon in the No. 42 Chevrolet beginning with next season's exhibition race at Los Angeles Memorial Coliseum. He will be teammates with Erik Jones, who recently signed an extension to continue with the team that launched this year when GMS Racing moved up to the Cup Series by merging with Richard Petty Motorsports.

The promotion to NASCAR's top series puts Gragson with another one of NASCAR's greats. He drove in the Truck Series for two-time Cup champion Kyle Busch and has spent four seasons driving in the Xfinity Series for JR Motorsports, the team co-owned by Hall of Famer Dale Earnhardt Jr.

Now he'll drive for Richard Petty, the seven-time NASCAR champion and Hall of Famer. Petty sat next to Gragson at Wednesday's announcement.

Gragson, a 24-year-old from Las Vegas, said being able to “officially say I will be competing full-time in the NASCAR Cup Series is a dream come true.”

“With where I am at right now with my racing career and JR Motorsports, how that operation is run, the whole atmosphere they have... that's kind of what I see over here at Petty GMS,” Gragson said. “It's a family atmosphere, great people, great leaders, and for a 24-year-old guy, for them to take the opportunity and want to hire me, it is truly humbling.”

Gragson is currently fourth in the Xfinify Series standings, with three wins and a guaranteed spot in the playoffs. He made it to the championship finale last season and finished a career-best third in the standings. Gragson has eight career victories in 123 Xfinity Series starts.

“We’re excited to have Noah join the Petty GMS family and climb in the No. 42 next season,” said Petty, chairman of the team. “Noah’s proven he can win in the Truck and Xfinity Series and compete for championships, and we know he will bring that same fire with him to Petty GMS next season.”

His promotion to the top level has been slower than he'd like, though, likely because of Gragson's tumultuous time on and off the track. He's an aggressive driver who Earnhardt Jr. has told to calm down in the past, and he's also physically sparred with rivals after a race.

Gragson has been given a part-time schedule in the Cup Series this year with Beard Motorsports, a team owned by Las Vegas natives, and made his Daytona 500 debut in February. He has nine starts this season with a best finish of 18th at Kansas.

“Noah has shown tremendous talent throughout his career,” Petty GMS Owner Maury Gallagher said in a statement. “I’ve watched Noah from a young age competing on the West Coast to now competing at NASCAR’s top level and he’s shown the commitment, desire and ability to win at every level.

"As we move in to our second year of competition in the Cup Series, Noah is a great fit for our organization and I think with Erik and his experience, the two will prove to be contenders each week.”