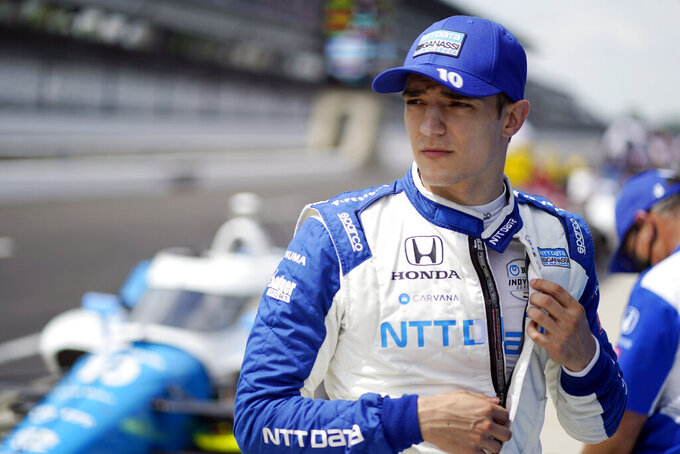 FILE - In this May 20, 2021, file photo, Alex Palou, of Spain, waits to drive during practice for the Indianapolis 500 auto race at Indianapolis Motor Speedway in Indianapolis. The bad news for Alex Palou is that he’s never raced before at Laguna Seca, the penultimate race in the IndyCar championship. The good news? Those trying to wrest the title away from Palou don’t have much experience, either. Laguna Seca only returned to the IndyCar schedule in 2019 and then was canceled last year during the pandemic. (AP Photo/Darron Cummings, File)

There are mathematical possibilities that could hand the 24-year-old Spaniard the title on Sunday during the penultimate race of the season. But he's not been able to shake Pato O'Ward all season, and Scott Dixon and Josef Newgarden remain viable contenders.

As far as O'Ward is concerned, the pressure is on Palou over the final two weeks of the season. Palou took a 25-point lead in the standings with his third win of the season last weekend, with only the Laguna Seca road course and next week's finale on the street course in Long Beach remaining.

“I don't know if we're a championship team yet, we haven't been the guys to beat all year,” O'Ward said ahead of Friday's practice. “Ganassi is the team to beat, they have three cars in the top five, and to me this is their championship to lose.”

Indeed, Palou leads six-time and reigning champion Dixon, as well as Marcus Ericsson, in the Chip Ganassi Racing stable as the trio is all part of the championship race. Ericsson, with two wins this season, is 75 points behind Palou and the last driver still mathematically eligible to win the championship.

Dixon is fourth in the standings, 49 points out, while two-time champion Newgarden is 34 behind the leader.

If O'Ward was trying to rattle Palou by declaring this title his to cough away, Palou didn't bite. Despite three engine issues this season and two DNF's, he's been one of the most consistent drivers in the paddock and has helped the Ganassi organization take over as the top team in the paddock.

“I mean, we're leading, right? So in that sense it is our championship to lose,” Palou said Friday. "But at the start of last week, he had a nine point lead in the standings and I think a lot of people thought he was going to win the race. But we left leading the championship and we've been leading a lot this year.

“But it's not ours. It's not ours until we get that trophy, so I'd say it is our championship to win.”

IndyCar returned the 11-turn, 2.258-mile permanent road course to its schedule in 2019, when Colton Herta won at the track forever noted for Alex Zanardi's fearless pass in the corkscrew turn of Herta's father, Bryan, 25 years ago.

The race was canceled last year during the pandemic and a 27-car field returned this weekend with varying experience levels.

Palou has never raced at Laguna Seca but has tested at the track twice. O'Ward has five starts in lower series, including a 2016 victory. He's also tested the track with his Arrow McLaren SP team. Newgarden and Ericsson were both in the 2019 race, while Dixon has a series-high five starts in Indy cars, and another in a sports car.

Newgarden was fastest in Friday practice, followed by Herta and Palou. Ericsson was 10th, Dixon was 11th and O'Ward 14th. Newgarden was the lone Chevrolet representative followed by 10 Honda drivers.

Romain Grosjean fell in love with Laguna Seca during a test session earlier this year and immediately felt comfortable on the track.

Until he opened Friday with a crash — his first ever in a road car.

Grosjean and teammate Ed Jones were filming a segment for IndyCar early Friday in a Honda Civic Type R when he crashed into the tire barrier entering the pits. The airbag deployed for Jones and a cracked passenger-side windshield was among the damage.

Honda has the car locked in a garage stall for inspection but early indications pointed to a problem with the brakes on the street car after Grosjean's fast lap. Jones had to ice what was described as “a little soreness in his neck” but recovered to post the fourth-fastest time in practice.