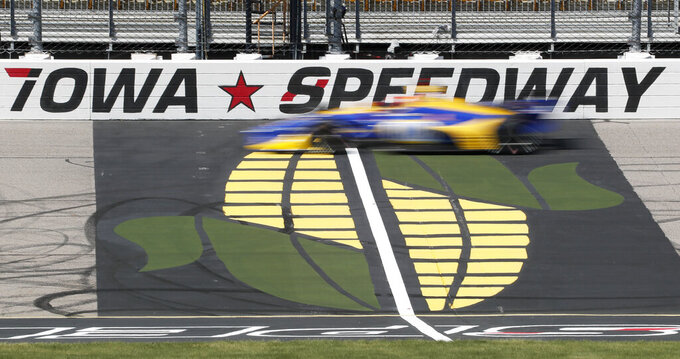 NEWTON, Iowa (AP) — Simon Pagenaud will start first in Saturday's IndyCar race at Iowa Speedway after winning the pole for the second week in a row.

Pagenaud, who won in Toronto last weekend starting from the front row, posted an average speed of 180.073 mph to capture his third pole of 2019 and his 13th overall.

The pole winner has never won an IndyCar race at Iowa's 0.875-mile oval in 12 tries though.

"Traffic plays a big role in this race," Pagenaud said. "It's about having a good car in traffic, a good car on long runs. Most of the time it finishes under smash-and-dash at the end with a late yellow."

Pagenaud's qualifying win was the fifth straight for Team Penske at Iowa and the eight in 13 tries. But the powerhouse squad has only won the race once in Newton, when Helio Castroneves notched his final IndyCar victory in 2017.

"There's very strong competition within the team. But as you can see, Team Penske is phenomenal. They give us the fastest cars," Pagenaud said.

Rossi put himself into position to compete for a win on Saturday. But the rest of the Andretti Autosport team struggled, as Ryan Hunter-Reay was ninth, Marco Andretti was 18th and Zach Veach was 20th out of 22 cars. Hunter-Reay has more wins than any other driver at Iowa though, winning in 2012, 2014 and 2015.

"I couldn't really shift the balance one way or the other with the tools. I was too loose mid-corner, and then big understeer really late," Hunter-Reay said. "It's unfortunate, but if you have a good race car here you can make it all up."

Like much of the country, Iowa is expected to get slammed by extreme heat on Saturday. The forecast calls for temperatures in the mid-90s when the green flag drops, with a "real feel" temperature roughly 10 degrees higher.

"It tends to amplify understeer, especially in qualifying when it's hotter. It amplifies tire wear, too. That's the biggest thing," Newgarden said.

"I'm not big into stats." — Josef Newgarden when asked why a pole sitter has never won an IndyCar race at Iowa.