Perez could return to F1 racing after coronavirus quarantine 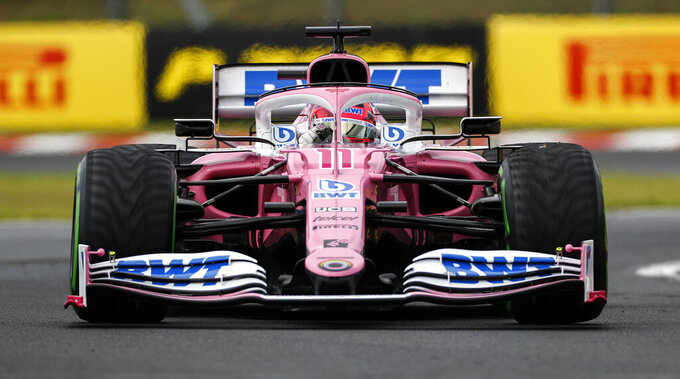 Racing Point driver Sergio Perez of Mexico steers his car during the the Hungarian Formula One Grand Prix race at the Hungaroring racetrack in Mogyorod, Hungary, Sunday, July 19, 2020. (Leonhard Foeger/Pool via AP)

SILVERSTONE, England (AP) — Sergio Perez could return to Formula One at Silverstone after missing last weekend’s race at the same circuit following a positive coronavirus test.

The Mexican driver has been in quarantine for seven days but he has been cleared to drive again for Racing Point this weekend providing he returns a negative COVID-19 test. Nico Hulkenberg is on standby if Perez is not fit.

Perez became the first Formula One driver to test positive for coronavirus, and it had been unclear whether he would be available to drive after the period of quarantine was extended to 10 days.

But Perez’s Racing Point team are using the date of his first inconclusive test, which took place last Wednesday, 24 hours before the change from seven to 10 days was enforced.

“Public Health England have confirmed that Sergio Perez’s period of quarantine has been completed,” Racing Point said in a statement on Thursday. “The team expects to make a decision on who is driving alongside Lance later today or first thing tomorrow morning.”

There are two consecutive weekends of racing at Silverstone as Formula One tries to pack in races following the pandemic-delayed start to the season.