Reddick holds on for Xfinity win at Talladega Superspeedway 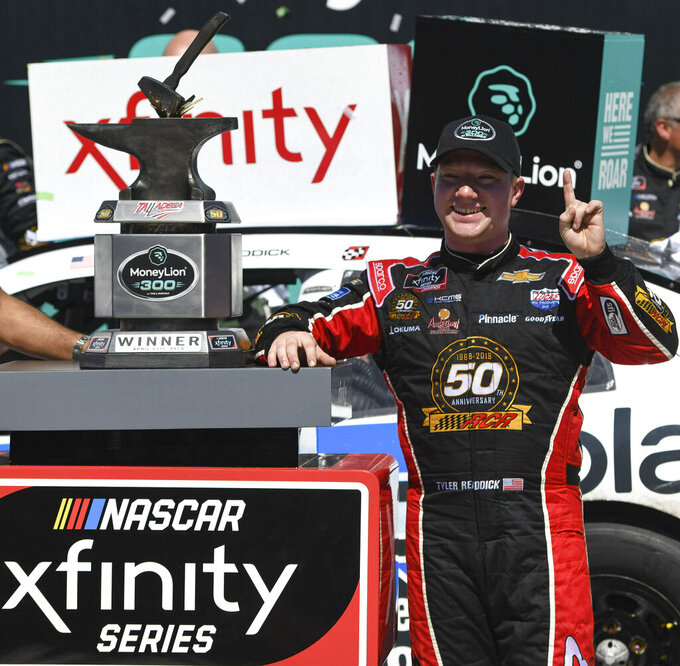 TALLADEGA, Ala. (AP) — Tyler Reddick held off Gray Gaulding in a two-lap shootout to win the NASCAR Xfinity Series race Saturday at Talladega Superspeedway for his first victory of the year.

Reddick withstood a last-lap move by Gaulding to survive the caution-packed race and overcame a speeding penalty on pit road and brushes with both the wall and rookie Noah Gragson. Nobody could get by him after a restart from the eighth caution, a red flag after a seven-car wreck.

His car sustained damage on the right side after hitting the outside wall.

"The day kept getting crazier as we were working on it," Reddick said. "It took longer than we planned. We came out way behind the leaders and we were two laps from getting lapped and we somehow got lucky. A caution came out and saved us and put us right back in the mix."

Gaulding took second for his best series finish and Christopher Bell was third.

It was Reddick's first win in nine races this season, but he already had six Top 5 finishes and extended his points lead.

The 23-year-old also won the $100,000 bonus as the top finisher among the four drivers who qualified. He passed Chase Briscoe with 10 laps left and kept the lead through late restarts in the No. 2 Richard Childress Racing Chevrolet. It was the first Xfinity win at Talladega Superspeedway for Childress and the first win for Randall Burnett as a crew chief.

Reddick started to feel like it might be his day after he managed to steer clear of the first of two late seven-car crashes.

"When that wreck happened and I missed it, I'm like, 'There must be a reason why I wasn't in that wreck. There's gotta be a reason I haven't wrecked yet,'" Reddick said. "It was just a lot of fun to work our way back to the front."

Reddick had to cut his victory news conference short to make a fill-in qualifying run for Sunday's Cup race. Brendan Gaughan missed qualifying to return home for his son's first communion but is returning for the race.

Burnett was able to savor the win a bit longer.

"Never a dull moment here, and I think anybody watching that race would agree," Burnett said. "It was one of the better Talladega races I've seen in a while. It was really cool. Tyler's an amazing talent. He's all over it."