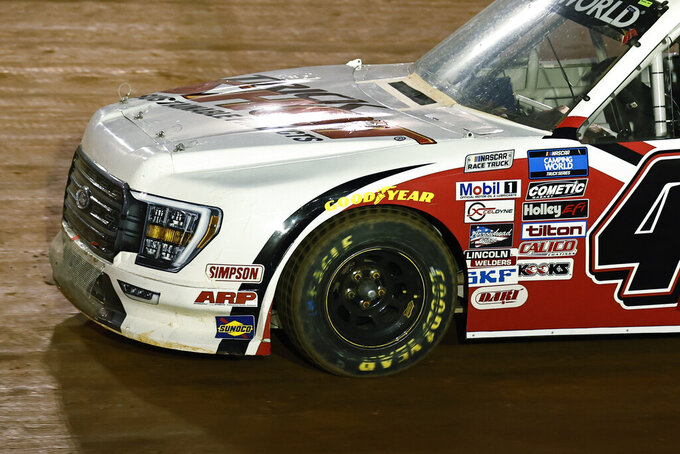 A screen covers the air vent on the truck of driver Andrew Gordon to keep mud from gathering and causing overheating, during the NASCAR Truck Series auto race Saturday, April 16, 2022, in Bristol, Tenn. (AP Photo/Wade Payne)

The reigning Truck Series champion won Saturday night for the first time in six races this season and sixth time of his career. Prior to the win, Rhodes this season had four top-fives and a pair of runner-up finishes through five races.

It was redemption of sorts for Rhodes, who was runner-up last year in NASCAR's first ever race on dirt at the 0.533-mile Bristol bullring.

The current points leader actually dominated the race, winning the first two stages and leading 95 of the 155 laps. But a strategy error almost knocked him from contention.

“I thought I gave it away for a moment,” Rhodes said. “Michael Waltrip asked me on the radio ‘Did you mean to (not pit)?’ and the real answer is, ‘No.’ So driving back through the pack like that was really, really tough and not something we wanted to do.”

Hocevar had the lead late until the 12th caution set up a final restart with five laps remaining. By then Rhodes had worked his way back into contention.

Hocevar was the leader, John Hunter Nemechek was second and Rhodes was third when the race resumed. Rhodes pounced past Nemechek and then used a crossover on Hocevar to take the lead with four laps remaining and then pull away.

Hocevar said he had few options once Rhodes made his move for the win.

“I mean either rip the top or crash him, I hate saying that but it's part of this racing,” Hocevar said. I couldn't really compete with him. He just had better tires and he was the fastest truck all day. I was just trying really hard and hoping I could hold him off. I kept looking up in the mirror and once he was fourth, I knew I was in trouble."

Joey Logano, the defending winner of the Cup race scheduled for Sunday, was sixth as he tried to get extra laps in advance of the main event.