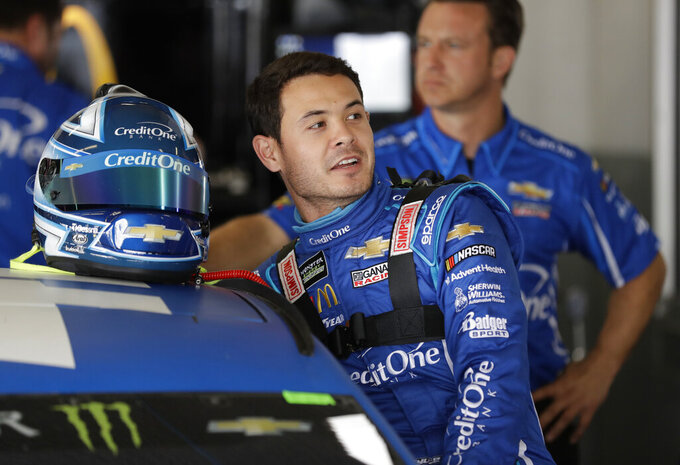 FILE - In this Feb. 15, 2019, file photo, Kyle Larson gets into his car during Daytona 500 auto race practice at Daytona International Speedway in Daytona Beach, Fla. Reinstated last week by NASCAR, Larson on Wednesday, Oct. 28, 2020, signed a multi-year contract with Hendrick Motorsports to drive the No. 5 Chevrolet next season. Hendrick has sold no sponsorship as of yet for Larson and only needed the blessing of Chevrolet, one of the partners that originally dropped Larson for using the n-word, to finalize the deal. (AP Photo/Chris O'Meara, File)

CHARLOTTE, N.C. (AP) — If Kyle Larson had been a true free agent available to the highest bidder, Rick Hendrick doubts he would have entered the game.

Hendrick had passed on Jeff Gordon's advice years earlier to sign Larson out of sprint cars. It was Chip Ganassi who took the risk and spent the money to develop Larson into a NASCAR star. Hendrick recognized he'd whiffed, but didn't want to outspend Ganassi to land the driver.

“I think because of my relationship with Chip I couldn't do it. I wouldn't. I can't,” Hendrick said Thursday in an interview with The Associated Press. “If somebody is out there looking for a job, that's one thing. But I do motors for Chip, we’re friends and, you know, I’d have a hard time with that.”

There was no bidding war for Larson, who was fired by Ganassi in April for using a racial slur while competing in an online racing game. NASCAR suspended Larson and the driver spent the last six months educating himself on racial justice and understanding his error.

Reinstated last week by NASCAR, Larson this week signed a multi-year contract with Hendrick Motorsports to drive the No. 5 Chevrolet next season. Hendrick has sold no sponsorship as of yet for Larson and only needed the blessing of Chevrolet, one of the partners that originally dropped Larson for using the n-word, to finalize the deal.

Hendrick is willing to fund the No. 5 out of pocket for now, confident Larson is a better person from his experience. If Larson's on-track performance meets Hendrick's expectations, the team owner believes he can sell the sponsorship.

“The plan is to let everybody get adjusted, let everybody see him and the performance I'm absolutely sure will be there,” Hendrick said. “As time goes on, they are going to see a story in him and I am a car salesman, you know?”

Hendrick is indeed one of the largest car dealers in the United States as well as owner of one of NASCAR's top organizations. His dueling businesses have been hit hard this year by the pandemic and Hendrick had to reorganize, renegotiate and readjust.

Hendrick told AP he didn't issue furloughs and paid employees 80% of their salaries. Contracts with sponsors were adjusted since NASCAR didn't race at all for 10 weeks, and even after the season resumed, sponsors have not been permitted at the track to hold hospitalities or entertain customers.

“I took a whack in April and a little bit of May, but we've come back and put together a really good year,” Hendrick said. “But living through that uncertainty, and the race teams, not knowing if you are going to have races and sponsors not being able to go to the track. It's been one of the toughest years I've ever had trying to juggle everything.”

He's also had to be cautious with his own health. Hendrick is 71, battled chronic myelogenous leukemia two decades ago and is, in his own words, “overweight. I start each day on a diet and by 10 o'clock I want a cheeseburger and ice cream. I go to Dairy Queen, I get a Blizzard and then turn around and get a chocolate dip large cone on the way out.”

Hendrick also told AP he underwent surgery on both a knee and an ear this year which required him to limit his personal interactions to avoid coronavirus. Aside from a two-week fishing trip, he said he's been mostly connected to clients, customers and employees electronically.

Because team owners are not permitted inside NASCAR's bubble, Hendrick said he's not attended races because he doesn't want to watch from a suite. He does plan to attend the Nov. 8 season finale at Phoenix, the final race for seven-time NASCAR champion Jimmie Johnson before he retires.

With one race to go to set the championship four, Hendrick has both Alex Bowman and Chase Elliott still in contention for a shot at the title. Should neither advance out of Sunday's race at Martinsville Speedway, Hendrick will be locked out of the title round for the fourth consecutive year.

If that happens, Hendrick still takes satisfaction in gains his organization has made this season.

HMS suffered through growing pains following the retirements of Gordon and Dale Earnhardt Jr., and Chevrolet's 2018 introduction of the Camaro in the Cup Series bombed. Hendrick noted streamlining of his own organization — all the teams are now in the same building — as well as at Chevrolet, and a 2021 engine partnership between Hendrick and Richard Childress has improved his four-car program.

His 2021 lineup will be his youngest ever as the four drivers combined average just 26 years old and Larson, in his seventh full season, will be the veteran. Hendrick doesn't have a Cup champion among them — Johnson and Gordon won 11 titles between them — but the boss sees tremendous improvement in William Byron and Bowman, and a bright future for the organization.

“I'm really pumped," he said. "I believe on balance, we will be much stronger than we have been in a long time. And that's across the board.”