Rosenqvist fights for job with pole-winning run at Indy 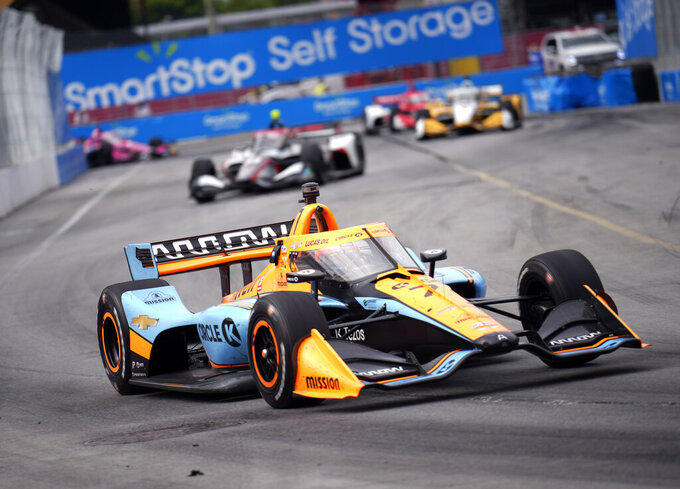 INDIANAPOLIS (AP) — Felix Rosenqvist continued to fight for his seat in the IndyCar Series with a pole-winning run on the road course at Indianapolis Motor Speedway.

“I think I’m in a good place no matter what happens. I’m going to have a good job somewhere,” Rosenqvist said. "IndyCar, I think it’s kind of addicting in a way. Like it’s very tough. When you succeed and when you win a race or get a podium or whatever, it’s just something you want to do again because it’s very rewarding when you do well, but it can also be brutal when you’re struggling, as I did last year.

“I’m doing well, and I want to continue that, so yeah, hopefully I’ll stay.”

Rossi, who is in his final season driving for Andretti Autosport, qualified second for Saturday afternoon's race. He is moving to Arrow McLaren next year when it expands to three cars.

O'Ward, who won Sunday at Iowa Speedway, qualified third and rushed to hug teammate Rosenqvist after Rosenqvist edged him for the pole. O'Ward is lobbying hard to keep Rosenqvist as his teammate in IndyCar.

“I love the guy, and I think what makes the atmosphere in the team so good to work around him is that he’s a genuine good guy, and it’s very easy to work with him,” O'Ward said. "It’s in his best interest for the whole team to do well. He won’t section himself off and wish bad upon the other car just to do better.

“I just think he fits exactly what the team of McLaren Racing and all that stands for. In order to create a team or to make a team better and drive it forward, you need complete trust and transparency when working with each other. If you don’t have that, you’ve got nothing.”

Rosenqvist said he's never had a teammate like O'Ward, with whom he could develop a true friendship away from the track. The two are practically inseparable on race weekends, at the track and at restaurants and social events away from the speedway.

“I consider myself pretty easy to get along with, but for sure I had bad teammates that you don’t trust and you don’t like, and you just have to get on with it," Rosenqvist said. "I think when you spend so much time together over a season, like it’s just so helpful if you can actually enjoy hanging out. I think with Pato it’s very special for sure. It’s something I hope that will last longer.”

Will Power qualified fourth for Team Penske and was followed by teammate Josef Newgarden, who was medically cleared to compete earlier Friday. Newgarden collapsed and hit his head after crashing while leading Sunday at Iowa.

The title race is a toss-up among six drivers separated by 44 points with five races remaining. Indianapolis 500 winner Marcus Ericsson is the points leader, but his car stalled during qualifying and he'll start last Saturday in the 25-car field.

“Man, I feel with Marcus, the further back he starts, the better he finishes. He has like a magic way of just always being there in the end,” Rosenqvist said of his fellow Swede. “That’s probably why he’s leading the championship, man. He’s probably the best racer in the field right now. I don’t really think he’s worried about it, either. Every time I talk to him and he’s had a bad qualifying, it’s just like, ‘Oh, I’m just going to drive up through the field.’ He’s really figured out how to go forward in this series.”