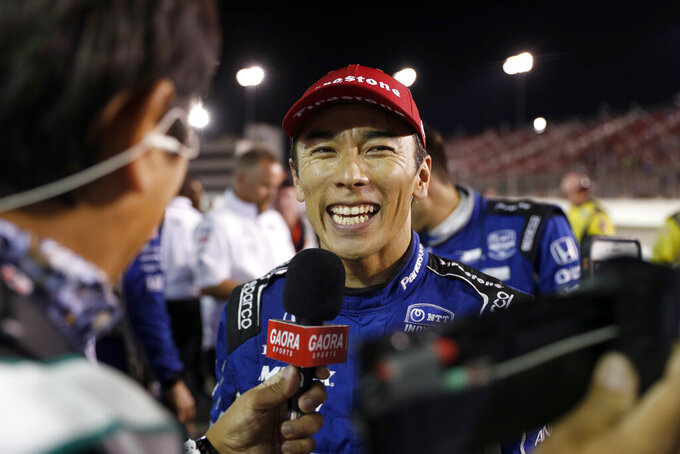 FILE - In a Saturday, Aug. 24, 2019 file photo, Takuma Sato smiles as he is interviewed after winning the IndyCar auto race at World Wide Technology Raceway in Madison, Ill. Takuma Sato will return to Rahal Letterman Lanigan Racing next season. Rahal said Saturday, Sept. 21, 2019 it had picked up the option for next year on Sato(AP Photo/Jeff Roberson, File)

LAGUNA SECA, Calif. (AP) — Takuma Sato will return to Rahal Letterman Lanigan Racing next season and Colton Herta was pulled inside the Andretti Autosport camp as IndyCar drivers are securing their 2020 plans.

Rahal said Saturday it had picked up the option for next year on Sato, a former Indianapolis 500 winner who has won twice this season for RLL.

"We have been very pleased with the results and level of competition Takuma has shown this season," team owner Bobby Rahal said. "His two wins and two poles don't fully indicate how competitive he has been overall this season and the fact that he was a contender at many other races. He is an integral part of our team. This decision allows us to keep the continuity and continue to build upon our program for 2020."

"I'm thrilled to be able to keep Colton in the Andretti family," Andretti said. "We've watched him grow and develop and we are excited to see the next chapter as he continues his charge in becoming a strong competitive force in the IndyCar Series."

An hour after the deal was announced, Herta won the pole — his third of the season — for Sunday's season-ending race.

Herta this season became the youngest winner in IndyCar history when he grabbed a victory days before his 19th birthday. The son of former driver and Andretti business associate Bryan Herta has been consistently quick all year, including this weekend at the season finale at Laguna Seca Raceway.

His fellow competitors describe him as fearless, and he's impressed many with his ability to get up to speed quickly at nearly every track while driving for small, underfunded Harding Steinbrenner Racing.

"It's always been a goal of mine to drive for Andretti Autosport ever since watching my dad drive for them in the mid-2000s," Herta said. "I'm very thankful for the Steinbrenners and Mike Harding for their efforts through my career and continued efforts into this year.

"I've grown up around the Andretti team and many of the guys that have been working there since my dad's days of driving are still with the team. I'm sure I'll feel right at home."

The future of A.J. Foyt Racing, as well as popular driver Tony Kanaan, is uncertain because primary sponsor ABC Supply is leaving after Sunday's race. Larry Foyt, who runs the team, said the plan is to field two cars next year but noted the search for funding is still underway.

ABC plans to sponsor one Foyt car for the Indianapolis 500, and there is no indication if it will be for Kanaan, who is in his 22nd season and the most veteran driver in the series.

McLaren head Zak Brown has at least one seat to fill at Arrow Schmidt Motorsports next season when the brand returns to IndyCar as a partner with Arrow Schmidt Peterson Motorsports. The team has interest in Conor Daly, as does Carlin, which has used Daly in four races this year. McLaren also might be chasing Indy Lights champion Oliver Askew.

James Hinchcliffe has stated he is excited about the future of the Schmidt organization with the McLaren addition and plans to remain with the team next season, and Brown and Sam Schmidt have both insisted the Canadian will be back. But speculation won't stop that Hinchcliffe would prefer to maintain his lucrative relationship with Honda, which can't happen when Schmidt moves to Chevrolet after the McLaren addition.

Adding to the garage gossip is that sponsor Arrow was angered when it learned Hinchcliffe was appearing in ESPN The Magazine's "Body Issue." The popular edition features naked athletes using props as coverage and Hinchcliffe was naked on the Yard of Bricks at Indianapolis Motor Speedway. Some photos had a checkered flag or tires as items to cover himself.

Hinchcliffe had agreed to be part of the popular annual issue to show the many scars from his near-fatal 2015 crash at Indy. He nearly bled to death and has made promoting blood drives part of his platform. But Arrow was blindsided by his participation and didn't like its logos in the photographs. The episode led to president Jon Flack's departure last week, as well as the team public relations representative.

It did nothing to quiet the talk around Hinchcliffe, even though all parties have insisted he's not on the move.

Indianapolis 500 winner Simon Pagenaud has yet to announce an extension with Team Penske, even though owner Roger Penske said after Pagenaud's victory in May the Frenchman would return. Pagenaud winning Indy saved his job with Penske and eliminated an option for Alexander Rossi, who re-upped with Andretti.

Chip Ganassi will likely field a third car next season, at least partially, and it could go to Askew. Askew won the title Saturday and the $1.1 million "Road to Indy" scholarship money that is a guaranteed three-race IndyCar program that includes the Indy 500. It gives him valuable funding to bring to a race team, and an opportunity to land with a top tier program.

Santino Ferrucci has had an outstanding rookie season with Dale Coyne Racing and said he'd like to return next season for a second year studying under four-time series champion Sebastien Bourdais.

"I'm pretty sure I'm going to be where I am, I don't think there will be too much change," Ferrucci told The Associated Press. "I'm very happy to be back with Dale and our engineering staff. I feel like we have something good going, and you know, it's also having continuity. It's really important I think as a rookie going into something that you already know next year and you're not having to reset again."

Later Saturday, Ferrucci was seen entering the Rahal hospitality tent as talk continues on Rahal expanding to a third car next season. The Rahal organization signed a five-year extension with Honda on Saturday that will take the team and engine maker to 30 years together.