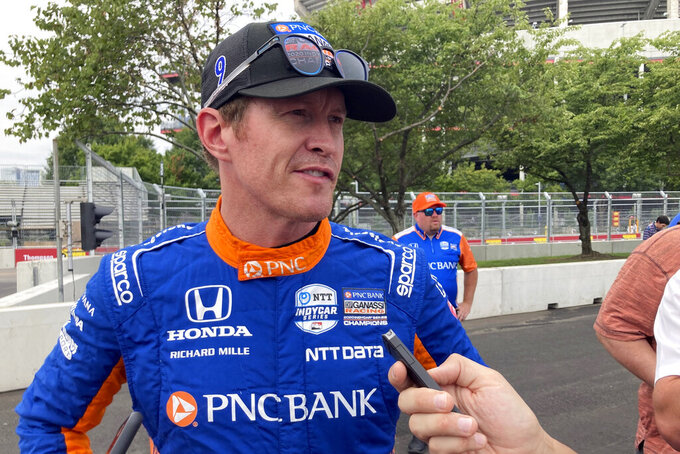 The New Zealander made his career debut on an oval last May at Texas in his fourth IndyCar start. He leaned on Team Penske mentor and four-time Indianapolis 500 winner Rick Mears for advice and finished second to Scott Dixon in a race in which his fellow Kiwi led all but six of the 212 laps.

That runner-up finish was the lone 2021 podium for McLaughlin, the three-time Australian V8 Supercars champion brought to the United States by Team Penske and advertised as a future IndyCar star.

The results were unacceptable for the 28-year-old struggling through the biggest slump of his young career. McLaughlin knew he needed to improve in qualifying, Penske made a team leadership change and tasked race engineer Ben Bretzman with rebuilding the driver's confidence.

McLaughlin responded by winning the IndyCar season-opener at St. Petersburg from the pole — his first win, his first pole — and now returns to Texas capable of putting together back-to-back wins. The Penske group strongly believes McLaughlin is going to be special and he's determined to live up to his hype.

After all, he arrived at the North Carolina headquarters for Team Penske in late 2020 already ranked third on Penske's all-time win list after a dominant run with DJR Team Penske in Australia. With his breakthrough victory on the streets of St. Petersburg last month, McLaughlin now has 57 victories as a Penske driver.

“To win on both sides of the world is pretty cool,” McLaughlin said. "It’s a great monkey off the back and a tremendous confidence booster as a team. We’re not kidding ourselves. We’ve got to keep working, keep working harder because all the teams are going to come back at us strong.

“Just keep pushing on and we’ll be OK.”

Texas Motor Speedway is one of the longtime and original partners of what is now known as the IndyCar Series. Then-track general manager Eddie Gossage made Texas a staple of the fledgling IRL in 1997 and Sunday's race will be the 35th at the track.

But attendance has dwindled and the cars used in the series have struggled mightily at Texas since the track began using a traction compound in the turns to help create a second passing lane when NASCAR is in town. The PJ1 compound doesn't match with the Firestone tires used in IndyCar and that high lane is far too slick and dangerous.

That means the IndyCar races have been a lot of single-groove, follow-the-leader snoozers. Sunday's race is the first of five ovals on the IndyCar schedule and the only oval race before the Indianapolis 500 in May. The last contract Gossage signed with IndyCar expires after Sunday's race and he retired last year.

“Losing Texas would be a huge hit," said Scott Dixon, a five-time winner at Texas and the six-time series champion. “I feel like we are missing (enough) ovals at the moment and need to add them.”

Texas was a doubleheader last season and Dixon routed the field in the first race. The next day was far more spirited with 12 lead changes among nine drivers before Pato O'Ward — a Mexican driver who lives in San Antonio — won his first career race.

IndyCar on Friday added an additional 30 minute practice to follow Saturday qualifying in which seven drivers will go out on track in an attempt to create grip for a second lane. The drivers who volunteered to try to create grip are: Ed Carpenter, Helio Castroneves, Pato O’Ward, Will Power, Graham Rahal, Felix Rosenqvist and Takuma Sato.

The drivers will use a combined total of 10 sets of Firestone tires from last year’s race. Each driver will have a set to use, except Power and Rahal will receive two sets.

There are five rookies scheduled to race Sunday and both Callum Illott and Christian Lundgaard will be making their oval debuts.

It will be the first IndyCar race at Texas for Devlin DeFrancesco, Kyle Kirkwood, David Malukas and Romain Grosjean. Seven-time NASCAR champion Jimmie Johnson, a seven-time winner at Texas in a stock car, is making his IndyCar oval debut.

Ed Carpenter and JR Hildebrand are making their season debuts.