Senna celebrations at Brazilian GP 25 years after his death 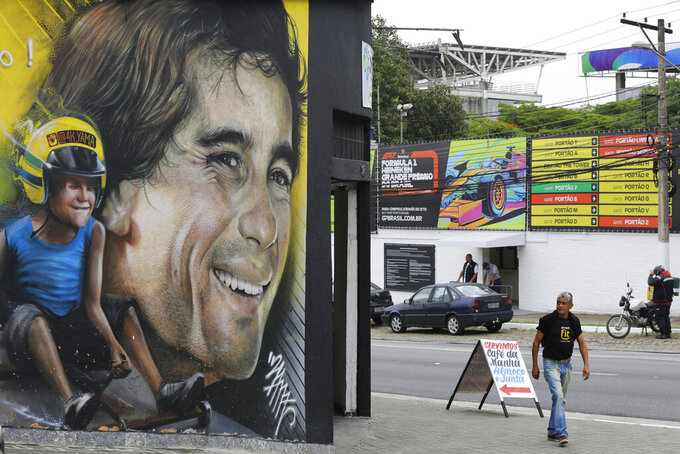 In this Nov. 7, 2019 photo, a mural depicts legendary Brazilian F1 driver Ayrton Senna on a business front near the Interlagos racetrack in Sao Paulo, Brazil. Many bars on busy streets like Avenida Paulista are open 24 hours a day during the Brazil F1 GP race, and hotels prepare feasts at early hours so fans don't need to refuel at the track. (AP Photo/Nelson Antoine)

SAO PAULO (AP) — With little at stake at this weekend’s Brazilian Grand Prix, the Formula One race is an opportunity for fans to remember and celebrate home favorite Ayrton Senna, 25 years after his death.

Lewis Hamilton — a huge fan of the Brazilian F1 great — and his Mercedes team have already secured this season’s driver and constructor titles, with second places also going to Valtteri Bottas and Ferrari, respectively.

A Brazilian TV helicopter painted in the yellow and green colors of Senna’s racing helmet has flown around Interlagos since Thursday. Banners at the track say “Obrigado, Senna” (Thank you, Senna) as part of a social media campaign to raise money for the children’s institute that carries his name.

Three-time F1 champion Senna died after a crash at the San Marino GP in May 1994. His title-winning McLaren car will take pride of place on the track before Sunday’s race. Bruno Senna will be driving it and is set to stop the car to take a Brazilian flag from a steward, as his uncle famously did after winning in Sao Paulo.

Many of the 60,000 fans expected for the race will wear shirts and flags bearing Senna’s face. With no Brazilian driver on the grid, local broadcasters are focusing on the charismatic driver who won the championship in 1988, 1990 and 1991.

Six-time F1 champion Hamilton is once more wearing a helmet paying tribute to his childhood hero. Hamilton has been asked about his relationship with Senna in every interview and news conference in Sao Paulo.

Four-time champion Sebastian Vettel of Ferrari is also paying his own tribute to Senna, with a wristband in yellow and green colors. He visited the Brazilian driver’s institute, which focuses on helping educational projects for poor children.

Home fans at the track, like 37-year-old Elton Campos, said Saturday they will cheer for Hamilton because the British driver clearly adores Senna.

“I didn’t like him much at first because Hamilton stopped (Brazilian) Felipe Massa from winning the title here in 2008,” Campos said, wearing a cap that read “Senna forever.”

“But Hamilton is very respectful to Ayrton, he genuinely loves him and now Brazilian fans feel like paying back a little.”

The commemorations started a week ago at a sponsor’s event when two-time F1 champion Emerson Fittipaldi drove Senna’s 1985 Lotus on the streets of Sao Paulo, causing some fans to cry.

Senna drove that same car to win his first F1 race at the Portuguese GP.

“I am speechless, there’s too many emotions, too many memories,” Fittipaldi said in tears after hugging Senna’s sister Viviane.

Veteran Brazilian journalist Flávio Gomes, who covered Senna in F1, says the driver wouldn’t necessarily agree with all the attention.

“It is looking as if Senna was the only good thing that Brazil produced in F1,” said Gomes. “Six drivers have already won races. Two others, Fittipaldi and Nelson Piquet, have won titles. Reducing Brazilian history in F1 to Senna is very unfair, and I think he wouldn’t agree with that either.”