Sonoma's new turn: NASCAR takes a ride on "The Carousel" 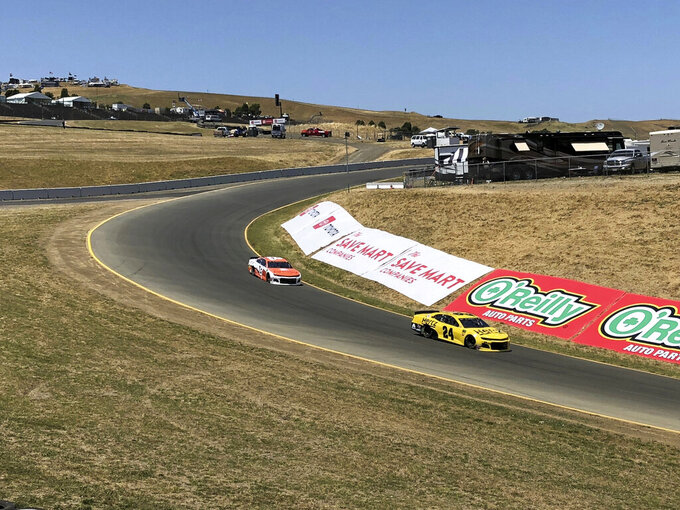 Daniel Hemric (8) and William Byron (24) drive into "The Carousel" at Sonoma Raceway during a NASCAR Cup Series practice Friday, June 21, 2019 in Sonoma, Calif. The track has put the tricky carousel turn back into its layout for the first time since 1997. (AP Photo/Greg Beacham)

And now the drivers are also going for a ride on "The Carousel" this weekend.

That's the name for a section of Sonoma Raceway that hasn't been used in a NASCAR race since 1997, but was put back in the layout this year to celebrate this venerable track's 50th anniversary.

With three more turns, longer laps and an overriding uncertainty across the paddock, the first road race of the NASCAR season could be a doozy Sunday — and the drivers can't wait to take a ride.

"I love it," William Byron said after practice Friday. "It's probably the most fun I've had driving a race car this year."

Nearly every driver is more excited than frightened by the Carousel's challenge. After all, weeks upon weeks of driving in circles and only turning left can get a little dull, even for the world's best at it.

Sonoma is already no picnic for drivers; in fact, it's one of the most physical tracks in North America. The layout is known for its precipitous elevation changes and tough turns, but the return of the Carousel adds another layer of complexity to an already daunting challenge.

NASCAR's usual 12-turn layout over nearly 2 miles at Sonoma has been transformed into a 15-turn, 2.52-mile setup, and most drivers are unfamiliar with the new part. They'll do 90 laps instead of 110, but the race is now 8 miles longer.

"I like the change," Denny Hamlin said. "I think it had gotten a little stagnant where we needed to freshen up the course."

Most NASCAR drivers spent time in simulators to prepare for this weekend, but that's not enough. Even before early practice Friday, drivers lined up to take pace car rides on the new layout, hoping for insight even in a passenger seat. Many also plan to watch the K&N Series race on Saturday to see how those drivers fare on the Carousel.

IndyCar races in Sonoma have used the Carousel, which means Chip Ganassi Racing and Team Penske could have a little extra data — if it does them any good.

"It's going to change a lot of things," Hamlin said. "The biggest thing is the strategy. We have all these notes from so many years here, and all this information based off of strategies that have played out in years past. Now we have a different stage length. The track is a different length. You're not going to be able to dive onto pit road at the last second. The lap times are slower. All of that plays a factor in strategy."

Bubba Wallace spun off the track roughly 10 seconds into his first practice lap. He was amused by his mistake, but not overly optimistic about his chances.

"I told my guys,' We've got three days here, and I'll try to get better in a short amount of time,'" Wallace said. "Hopefully I can put myself together to make a complete lap."

Yet the challenges also create opportunity. Most drivers are cautiously confident the layout will allow more passing because of the braking zones created by the Carousel — as long as they have the space and the courage to make the move.

"It kind of suckers you in to picking up the throttle too soon, which just washes you up on exit," Paul Menard said. "You have to have some patience, for sure."

Kyle Busch drove the Carousel in Legends cars way back in 1998, and his four career road course victories are the most in the field — yet he repeatedly went off the track during Friday's second practice session, apparently testing his limits on the new layout. Jimmie Johnson, Kevin Harvick and Michael McDowell also have driven the Carousel in past racing lives, but they don't claim any special knowledge on how to ride it.

"Mentally, you can't make any mistakes," Matt DiBenedetto said. "You can't get lazy. You have to pay attention all day and be really precise with your shifts. ... And you're working a lot harder inside the car at Sonoma than you would be on a mile-and-a-half (track). You've got to be hydrated. Sleep well. All of the basic things to feel really good."