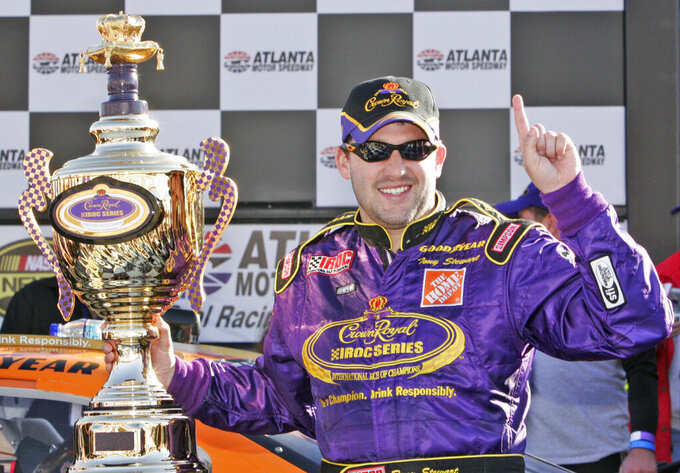 FILE - Tony Stewart celebrates his International Race of Champions (IROC) championship in victory lane at Atlanta Motor Speedway in Hampton, Ga., in this Saturday, Oct. 28, 2006, file photo. Superstar Racing Experience (SRX), disclosed the format it will use Thursday, May 6, 2021, to The Associated Press when the all-star series launches this summer at Stafford Motor Speedway in Connecticut on June 12 for the first of six Saturday night short-track races across the country. Stewart and co-founder Ray Evernham modeled the series after the popular but defunct International Race of Champions that pitted drivers from multiple formulas in identically prepared cars at various tracks for 30 years. (AP Photo/Gene Blythe, File)

CHARLOTTE, N.C. (AP) — The car will definitely not be the star this summer in the Superstar Racing Experience, which has been formated for drivers to showcase their skills using what series co-founder Ray Evernham calls “old-school tools.”

“With this format, you not only have to be the fastest driver, but you’ve got to be the smartest driver, too,” added Tony Stewart, who co-founded SRX and will also drive one of the cars this summer.

SRX disclosed the format it will use Thursday to The Associated Press when the all-star series launches this summer at Stafford Motor Speedway in Connecticut on June 12 for the first of six Saturday night short-track races across the country.

Each event will consist of two timed 15-minute heat races followed by a 100-lap feature at every track except Slinger Speedway in Wisconsin, where the event will be extended by 50 laps because the track is only a quarter-mile oval.

There will be unlimited attempts at a green-white-checkered finish to complete the race. There are a maximum 12 points to earn in each heat, and the race winner receives 25 points.

“It was very important to come up with a format that would provide the best entertainment to our fans while rewarding the drivers for their performance. This format will do that,” Evernham said. “Every driver has the same opportunity. They’re in a car that’s very different because it’s so universal. It’s a road-course car first, a pretty good dirt car, and just an OK paved oval car."

Evernham and Stewart modeled the series after the popular but defunct International Race of Champions that pitted drivers from multiple formulas in identically prepared cars at various tracks for 30 years. Stewart won its final championship in 2006 and there hasn't been a series like it since.

Evernham and Stewart, both members of the NASCAR Hall of Fame, believed there was still an interest for a series that featured cars that don’t rely on aerodynamics and reward mechanical grip and driver skill. Stewart also thought he could find drivers who had stepped away from full-time racing but still wanted to occasionally compete.

The series will air live on CBS and race at some of the most prolific short tracks in the country, including Knoxville Raceway in Iowa — which calls itself ‘The Sprint Car Capital of the World’ — the Stewart-owned Eldora Speedway in Ohio and Lucas Oil Raceway in Indianapolis.

“This is going to be a challenge. These are new, purpose-built racecars that none of us have driven before," Stewart said. "Every track is so different, and we don’t know how abrasive the pavement tracks are going to be and what kind of grip we’re going to have on the dirt tracks. Even for the local all-stars who have turned thousands of laps at their particular track, they’ll be doing it in a totally different environment.”