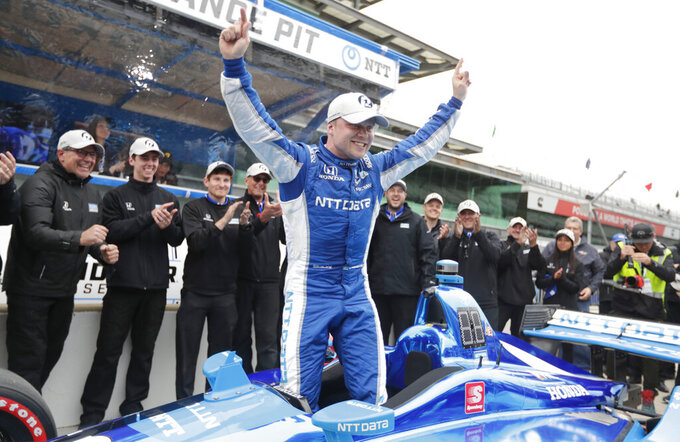 FILE - In this May 10, 2019, file photo, Felix Rosenqvist, of Sweden, celebrates after winning the pole during qualifications for the Indy GP IndyCar auto race at Indianapolis Motor Speedway in Indianapolis. Rosenqvist leads all rookies in the IndyCar series this season with 209 points after finishing sixth with a car that qualified just 18th last weekend at Road America. (AP Photo/Michael Conroy, File)

NEWTON, Iowa (AP) — Felix Rosenqvist spent the past decade traveling the world in hopes of solidifying his career in motorsports.

Rosenqvist finally found a home with powerhouse Chip Ganassi Racing in 2019 — and his early performances indicate the Swedish driver might have a bright future in the IndyCar series.

Rosenqvist leads all rookies with 209 points this season after finishing sixth last weekend at Road America in Wisconsin.

Rosenqvist, driving the No. 10 Honda, has shown flashes of potential for a team that also features five-time series champion Scott Dixon and Dario Franchitti, a three-time Indianapolis 500 winner who serves as an adviser for CGR.

Rosenqvist has yet to put together a breakout race, but it might be coming soon.

"It's really difficult. I challenge anyone to come out here and do like a championship run for the first year," he said. "It's always like the series is throwing a curveball. It's hard to explain ... it's tough. But I feel like I've learned a lot and I feel like I've had all the puzzle pieces, just not on the right weekend."

Rosenqvist is just 26. But he has been in motorsports for over 10 years, bouncing all over the globe to prove he can compete at the highest level of racing.

Rosenqvist first found a home in a single seater in Asia in 2008 before moving on to Europe as a driver in the Formula 3 feeder series, where he won 13 races and the championship in 2015.

A year later, Rosenqvist found himself in the Indy Lights series, a step below Indy cars. Rosenqvist made a name for himself by winning three of the 10 events he started, and he made a crucial connection with the CGR team by testing for them at Mid-Ohio in 2016 and 2017.

Rosenqvist won a pair of races in Formula E a year ago before nabbing a highly coveted seat with Ganassi's Indy program.

"He's got a lot of experience in a lot of different cars. So, his talent level is very high," said Franchitti, whose main focus so far has been tutoring Rosenqvist on ovals. "He's learning all the time and he's got the speed, which is the key ingredient for any driver."

Rosenqvist's series debut was a strong one, finishing fourth in St. Petersburg to open 2019. He then qualified first for the Indianapolis Grand Prix before finishing eighth. Rosenqvist ran his first Indy 500 strong as well before being collected in a crash that wasn't his fault.

Franchitti's advice has helped accelerate the learning process for Rosenqvist, who has six top-10s in 10 starts. But Rosenqvist also has leaned heavily on Dixon, whose calculated consistency has defined his career.

"I feel like when the car has felt really good, I've been right there with Scott," Rosenqvist said. "But it's more like he's maximizing the car no matter how it feels, or if it's uncomfortable, et cetera. And that's been really helpful. Because sometimes when you're a rookie you don't really know if you're at the limit or not."

The one area Rosenqvist doesn't have a ton of experience with is ovals, and with starts at Iowa — where he tested on Tuesday — Pocono and Gateway outside of St. Louis coming up, there's a decent chance his rookie season could go sideways.

But there's also a chance that Rosenqvist puts it all together and notches a podium finish or even a win before his first season is complete.

"Everything has been there. Just not everything in one weekend," Rosenqvist said. "I think it's around the corner, for sure."