For tennis and golf, tournaments without fans come at a cost 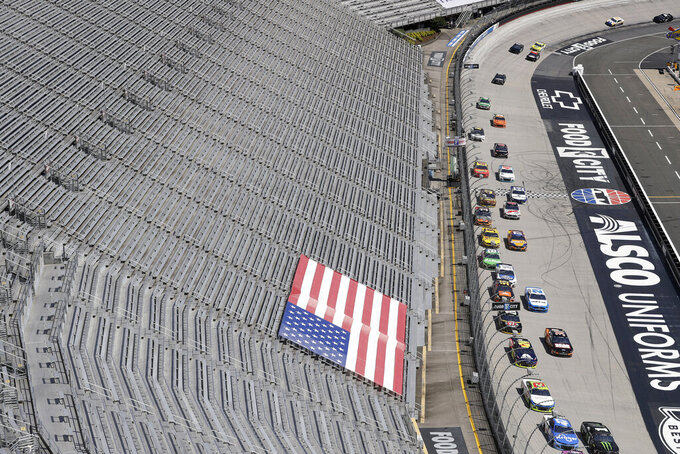 FILE - In this May 31, 2020, file photo, cars speed past empty stands during a NASCAR Cup Series auto race at Bristol Motor Speedway in Bristol, Tenn. Tennis and golf tournaments could be in real financial trouble if they are held without spectators because of the coronavirus pandemic. The biggest team leagues such as the NFL and NBA seem to be in good shape because they derive most of their money from TV contracts worth billions each season. NASCAR also relies mainly on broadcast rights fees. (AP Photo/Mark Humphrey, File)

When he first contemplated the prospect of a U.S. Open without fans because of the coronavirus pandemic, the U.S. Tennis Association’s chief revenue officer figured there was no way it could work.

Lew Sherr eventually came around to embracing the idea of a closed-door Grand Slam tournament — if it’s held at all; a decision is expected as soon as next week — because it still could make money even if millions were forfeited with zero on-site receipts from tickets, hospitality, food and beverage or merchandise sales.

“Certainly better than not playing. It still makes sense financially and as a way to keep the sport vibrant and engage fans,” Sherr said. “As you get to lower-level tournaments, it becomes a much harder conversation.”

Golf, which resumed Thursday in Fort Worth, Texas, also could take a real hit because of the virus and the recession.

Week-in, week-out events in tennis, where the pro tours are suspended at least until late July, do not bring in TV rights fees like the U.S. Open, which averages $70 million per year in the host country alone. Some of the smallest tour stops even need to buy air time.

The biggest team leagues such as the NFL and NBA seem to be in good shape because they derive most of their money from TV contracts worth billions each season. NASCAR, which returned last month with a flurry of races at empty tracks but announced plans Tuesday to begin allowing small numbers of fans, relies mainly on broadcast rights fees worth hundreds of millions annually. Another sport built around events at independent tracks, horse racing, will begin its Triple Crown series sans spectators at the Belmont Stakes in New York on June 20 with what might approach $100 million in online gambling.

But tennis and golf rely to a much greater degree on income generated from having people on-hand, especially for high-end tickets and hospitality. The economic framework for each tourney varies in both sports; smaller events, especially, would suffer financially if live audiences are eliminated or restricted.

One possible fallout of reduced revenue around tennis could be reduced prize money, even at a major championship like the U.S. Open. Another: Some tournaments simply could disappear.

“Will a 15,000-seat stadium need to seat only 5,000 because of social distancing? Will that be tennis’s future? If so, will the sport survive?” said James Blake, a former top-five player and tournament director at the Miami Open, one of more than 40 tennis events scrapped since March because of the COVID-19 outbreak.

“You either cut the prize money a little bit,” Blake said, “or you have one or two more years where these companies and tournaments can remain financially solvent, and then they can’t do it anymore.”

Here is a look at how economic structures of certain sports mean they will be affected differently by the pandemic:

Race hosts receive 65% of NASCAR’s $8.2 billion, 10-year television package; that in turn accounts for about 60-70% of track revenues. So it makes sense to move forward despite losing other revenue streams. “Assuming that we get all of our races in ... NASCAR and its tracks will come through this OK,” Dover International Speedway Inc. President and CEO Michael Tatoian said. “It’s not that we’re going to be flying through it. It’s not that we’re not going to have any kind of impact. Of course we will. It will set us back. But not enough to be devastating.”

The Kentucky Derby, according to an estimate a few years ago, makes only a little more than 10% of its revenue from broadcast rights. That’s why Churchill Downs, Belmont and Santa Anita Park all recently reopened to racing, even if no fans are present: The main source of revenue, online gambling, still functions just fine. Last year’s Belmont day drew $102 million in wagers with no Triple Crown on the line — and $91 million of that was off-track betting.

Eliminating spectators means eliminating significant chunks of a tournament’s revenue. That starts with big-earning hospitality tents and pro-ams that can bring in upward of $1 million, and includes other revenue sources like merchandise and ticket sales. Tournaments rely heavily on title sponsors — “We wouldn’t be able to return” without them, Commissioner Jay Monahan said. But it’s the local sponsorship that sustains each tournament. And if discretionary spending by corporations dries up, the effects could be greater in 2021.

The U.S. Open — as of now, scheduled to begin in late August — gets about a third of its roughly $400 million in annual revenue from various American and international TV rights deals. About a quarter is from sponsorship deals, some of which would be renegotiated if there were no on-site fans. An additional 35% or so comes from tickets and hospitality, with less than 10% from food and beverage, merchandise, etc. — all of which would vanish without the hundreds of thousands who normally attend.