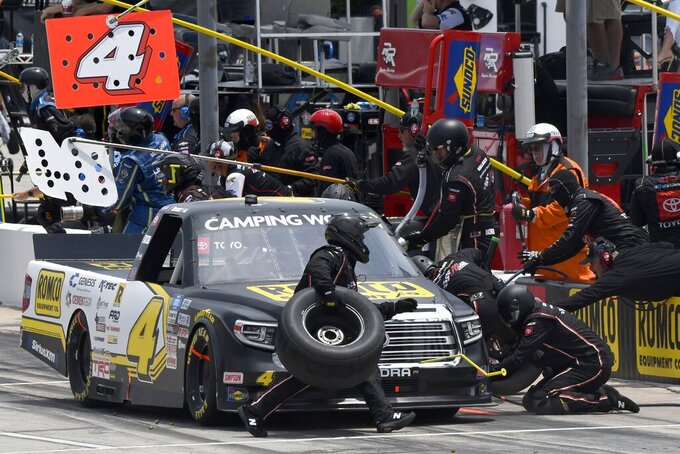 FORT WORTH, Texas (AP) — John Hunter Nemechek has always had confidence in his ability, and that move he made this year back to NASCAR trucks from the top-level Cup Series was all about having the opportunity to win races with top-tier equipment.

A day after his 24th birthday, Truck Series points leader Nemechek won his second consecutive race in the No. 4 Toyota for Kyle Busch Motorsports, leading the final 22 laps and finishing more than 3 seconds ahead of reigning Cup champion Chase Elliott on a steamy Saturday in Texas. It was Nemechek's fourth truck victory of the season, and 10th of his career.

“I’m not down on myself or not second-guessing myself if I can do this. I feel like I went through a little bit of a mental battle last year during parts of the year, and then not having won a race in two years definitely took a toll on me,” said Nemechek, who had only three top-10 Cup finishes last year. “So for myself, it was the right call. I took a bet on myself at the end of the year, and ultimately we’ve been fast every week.”

With four races left before the series playoffs begin, Nemechek stretched his lead to 78 points over Ben Rhodes, whose 27th-place finish was his worst of the season. Rhodes had finished in the top 10 all but one other race, the lowest previously a 16th at Atlanta.

Elliott led 45 laps to finish second in his first truck race at the 1 1/2-mile, high-banked Texas track where Sunday night he will try to win his second consecutive All-Star race.

Todd Gilliland and Zane Smith both had top-10 finishes to move up a spot in points, to fourth and fifth, respectively.

It was the fifth consecutive win this season on 1 1/2-mile tracks for KBM, including Nemechek's last two races in the No. 4 Toyota, plus a victory at Las Vegas, and owner Kyle Busch's wins at Atlanta and Kansas. Nemechek started on the pole based on metric qualifying since there was no practice or qualifying at Texas, then led five times for 64 laps.

“You can say it’s a step back, but you don’t have to look at it that way. I’m not a guy that just wants to ride around and say that I’m a Cup Series driver. I strive for more than that,” Nemechek said. “I want to be perfect. I want to win races. I want to win championships. And I didn’t feel like I could do that where I was at with my ability.”

The win at Texas came a day after Joe Gibbs Racing announced that Nemechek will drive the team’s No. 54 Toyota Supra in three Xfinity Series races later this season, including at Texas in mid-October.

Sheldon Creed, already locked into the playoffs because of an earlier win, finished last in the 36-truck field and slipped from fourth to sixth in the standings. Creed won at Texas last October but was was done Saturday after twice getting too high on the track into the traction compound in the first 20 laps. Creed first got loose on the sixth lap when his No. 2 truck struck the outside wall, then on the 20th lap had another incident in Turn 2 that ended his day.

Nemechek won the first stage, which finished under caution, as did the second stage won by Zane Smith.