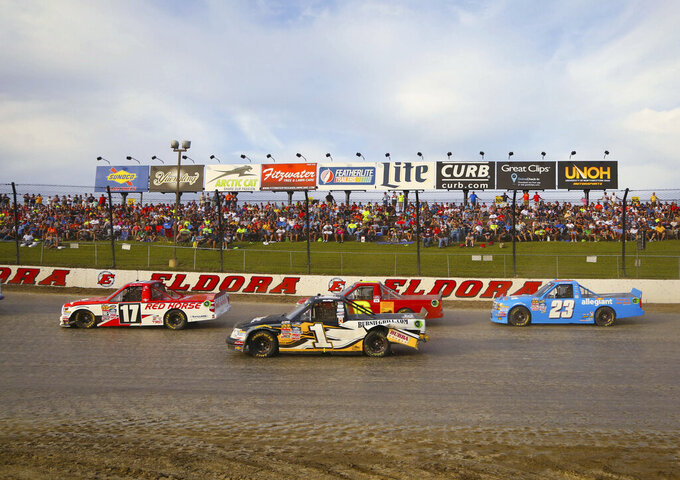 FILE - Trucks race past grandstands on the back stretch during the third qualifying race for the NASCAR Truck Series' Mud Summer Classic auto race at Eldora Speedway in Rossburg, Ohio, Wednesday, July 22, 2015. Tony Stewart will pay $1,002,022 on Thursday night, June 9, 2022, to the winner of the Eldora Million dirt late model race at Eldora Speedway in Rossburg, Ohio. The Thursday night payout will be the second-largest purse in motorsports only to the Indianapolis 500.(Jim Witmer/Dayton Daily News via AP, File)

Tony Stewart went to bed at 7:30 a.m. Wednesday after pulling an all-nighter at Eldora Speedway.

Stewart has $1 million to give away Thursday night and is determined that his track in Rossburg, Ohio, will be in the best condition possible for the return of The Eldora Million.

“I'm just thrashing," Stewart told The Associated Press on Wednesday afternoon by phone, the sound of him moving from various trucks and tractors in the background. “We've only had two events so far this year because of weather, and we've got to get the track ready to give this money away."

About 130 cars were expected in the night's preliminaries. The Thursday night feature will pay a whopping $1,002,022 to the winner — the second-largest purse in motorsports behind the Indianapolis 500.

The Eldora Million is a 101-lap dirt-track late model race run on a half-mile clay oval in western Ohio. On a per-mile basis, Stewart's event will pay more than any race in the United States.

Eldora paid out $1 million once before, in 2001 when the late Earl Baltes owned the track. Donnie Moran scored the $1 million payday.

Since purchasing the speedway in 2004, Stewart has aimed to match the prize.

“I said from the first day I took ownership of Eldora that we wanted to make Earl proud by continuing to push the limits of race promotion," Stewart said. “I can’t think of a better way to honor their legacy than by bringing back The Eldora Million one more time for both our longtime drivers and fans, as well as a whole new generation who have only heard about it.”

The two nights of The Eldora Million are followed by two nights of the Dirt Late Model Dream. The four nights of racing — weather permitting — has created one of the richest open competition events in motorsports history, with posted prize money in excess of $1.9 million.

Moran, winner of the only other running of The Eldora Million, recently reflected on the payday that earned him the nickname “Million Dollar Man.” That payout has stood as the largest for a dirt-track late model race for two decades and won't be broken until Stewart crowns a winner Thursday night.

Moran brought a new car and engine to Eldora in 2001 and lured his sister and brother-in-law out of retirement to help his team. He told them they could get paid or take a percentage of his winnings, and they gambled and went with the winnings.

But what Moran remembers most was that his wife ignored her doctor's advice to stay home because of complications she was experiencing while pregnant with their fifth child. She went anyway.

“When it hit me that I had really won was when I was on the podium and I got to give her a hug. That was a magic moment that I’ll never forget the rest of my life," Moran said. “She had watched most of the race sitting on the ground, I think, but she came through fine. We had our daughter, Savannah, a few days later. Today she works for Tony Stewart at Eldora as one of the trophy girls.”

As for the money?

“It kept me racing for quite a few years and paid off some bills,” Moran said. “I was basically a self-funded team, so it really helped.”

Stewart is hoping his reiteration of The Eldora Million helps another grassroots racer. He has had to buy two new tractors in the last week and asked another track to send its workers to help him prep the Eldora surface, which has been soaked by rain all week.

“We always said one day we wanted to do the Million again and we're fighting everything to make it happen,” Stewart said. “I'm living, breathing, everything this racetrack right now and I hope Earl is looking down proud of the job we're doing to carry on his legacy.”