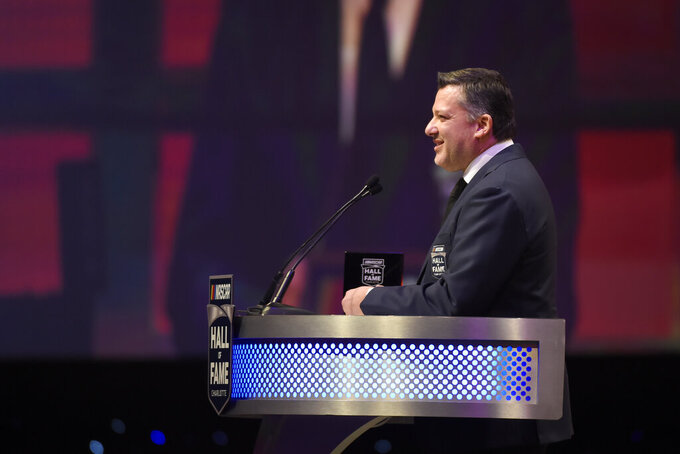 Tony Stewart talks about his career as a driver and team owner during the NASCAR Hall of Fame induction ceremony in Charlotte, N.C., Friday, Jan. 31, 2020. (AP Photo/Mike McCarn)

CHARLOTTE, N.C. (AP) — For one of the first times in his life, Tony Stewart showed up overdressed.

Smoke wore a tuxedo to his induction into the NASCAR Hall of Fame, and the blue honorary jacket is just a regular sport coat, not flashy enough to match the rest of Stewart's outfit.

The mismatch didn't last long. By early Saturday morning, when the guest of honor finally rolled into his celebratory party at a sky-top lounge high above Charlotte, Stewart had changed into an oversized Oakley hoodie, baggy jeans and sneakers. He was the only one in attendance not adhering to cocktail dress code.

Stewart hardly made it through the door before the lobby became a receiving line. First up was Joe Gibbs, inducted himself alongside Stewart into the 11th Hall of Fame class just hours earlier. Along with Bobby Labonte, the first winner of Gibbs' five Cup championships, this class was a celebration of an organization built from the bottom by Gibbs and launched into greatness with three titles by Labonte and Stewart.

There was “Coach," circling the lobby, sticking close to the door. Gibbs is now in both the Pro Football Hall of Fame and NASCAR's Hall of Fame and could have been in bed hours earlier. Instead, he was making small talk as he waited for his former problem child to walk through the doors.

It was the “Smoke Show” for NASCAR for one night again as Stewart reigned supreme. From start to finish, he was the star of induction day, which began with a rocky morning rehearsal because his speech was rejected. Stewart had just hours to come up with an entirely new speech because his original centered around photographs he did not have the rights to use.

“I was devastated,” Stewart said of what he described as “wrecking his primary” and “bringing out the backup” when he opened his Friday night speech. He could have delivered one of this trademark monologues, but cornered on stage at the Charlotte Convention Center and admittedly nervous, he read start-to-finish from a teleprompter for what he believes is the first time in his long career.

He had not had the time with the new material to grow confident enough to hit his sharp one-liners. His bit was humbling and self-deprecating, but Stewart was still anxious.

He delivered — as he always has — and earned raucous laughter on several occasions, most notably when the lifelong bachelor quipped: “Since we’re talking about family, since I don’t have one of my own, I’d be remiss if I didn’t thank all the girlfriends who were a part of this journey with me. These girlfriends’ short time and sacrifice meant a lot to me."

Stewart is revered as “The People's Champion” for his refusal to change from a blue-collared Indiana dirt racer into a traditional star. He eats fast food, Spaghetti-O's straight from the can, and shuns exercise. He turns 49 this year, his fourth season since retiring from NASCAR racing.

Stewart swore he'd never drive a sprint car again after the 2014 death of Kevin Ward Jr., a driver killed when he was struck by Stewart on a darkened upstate New York track. Ward had climbed from his own crashed vehicle and approached Stewart's moving car, a fatal decision but Stewart was not criminally charged.

Ward's death sent Stewart into a deep depression and essentially marked the end of his competitive NASCAR career. He already had come back from a devastating broken leg that cost him the end of the 2013 season. Stewart won just one more Cup race following Ward's death, in his 2016 farewell season, a campaign abbreviated by a broken back suffered in an off-road accident.

When he was done as a NASCAR driver, leaving his role as co-owner of Stewart-Haas Racing the only true tie to the stock car series, he went back to his roots. He relocated from North Carolina to spend more time at his custom-built Indiana retreat. And he started racing sprint cars again.

Now he's busy every week, racing all over the country, driving himself in his bus when needed. It's just like the old days, when Stewart was broke and relied on his parents to figure out how to fund his career.

“My mom and dad made so many sacrifices to give me the opportunity to race go-karts and then midgets and sprint cars. I didn’t know it at the time, but they mortgaged the house in order for me to go racing,” Stewart said. “There isn’t a financial planner in the world who would say, ‘That’s a good idea.’ But they did it because they believed in me.”

So there was Nelson Stewart, himself still racing well into his 70s, waiting long after midnight for his son to arrive to the party. When Stewart finally made it, a mere 10 yards through the door, his father patiently waited on the outskirts of the circle forming around his son. Gibbs was one of the first greeters, offering his well-wishes before immediately heading home.

Friends, colleagues, former teammate Denny Hamlin, they all made a stop at the main attraction. When Stewart turned and finally noticed his father, the two embraced. It was brief. Then Nelson Stewart headed home.

These are the times Tony Stewart — affable, engaging, humorous — lets his guard down and shines. It was his night, his time, and the line of people eager for some face-time with Smoke was growing.

He's one-of-a-kind, NASCAR's modern-day A.J. Foyt, and there probably will never be another like Stewart: Three-time NASCAR champion and new Hall of Famer.