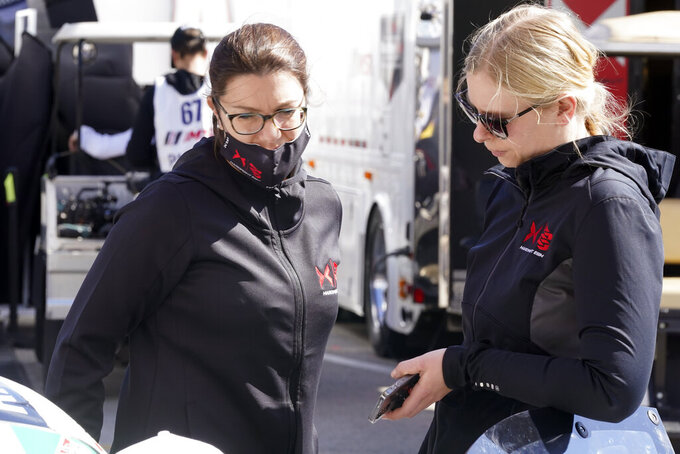 Drivers Katherine Legge, left, of Great Britain, and Christina Nielsen, of Denmark, talk outside their garage after a practice session for the Rolex 24 hour race at Daytona International Speedway, Friday, Jan. 29, 2021, in Daytona Beach, Fla. The two women will team up with drivers and team co-owners Rob Ferriol and Earl Bamber in the No. 88 Team Hardpoint EBM Porsche 911 GT3 R.(AP Photo/John Raoux) 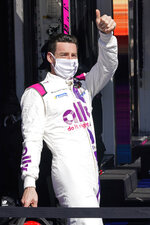 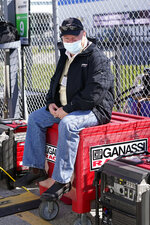 The Rolex 24 at Daytona is once again stacked with superstars — Kevin Magnussen fresh out of Formula One, reigning IndyCar champion Scott Dixon and Chase Elliott, two months removed from his first NASCAR title — all part of a robust field of 50 entries just a year removed from a record-low car count.

Even in a pandemic, the Rolex 24 is the place to be for racers.

The prestigious international sports car race began in 1962 as the three-hour Daytona Continental before Bill France Sr. expanded it four years later into a twice-around-the-clock endurance event. France wanted the top road racers in the world at his Florida facility and created the stage for them to come.

“He had the vision of best drivers, best cars, best teams and this year in particular really shines," said John Doonan, president of IMSA, the sports car series owned by the France family. “This event is a place where drivers can compete against the best of the best. It's the greatest gathering of champions around the world from every discipline under the sun.”

Jimmie Johnson, the seven-time NASCAR champion headed to IndyCar this year as a rookie, will be behind the wheel of an Action Express Cadillac when the race begins Saturday. It will be Johnson's eighth Rolex, first in a decade, and he's part of an all-star lineup seeking history.

The No. 48 — running in partnership with Hendrick Motorsports of NASCAR — includes Indianapolis 500 winner Simon Pagenaud, former Rolex and Le Mans winner Mike Rockenfeller and Kamui Kobayashi, who is trying to become the first driver to win three straight Rolex watches in race history.

Kobayashi must contend with Renger van der Zande, his teammate on the winning Wayne Taylor Racing entry the last two season. WTR split by moving from Cadillac to an Acura factory program this season and Kobayashi and van der Zande went their separate ways.

Both return to Daytona in Cadillacs, van der Zande as the full-time driver alongside Magnussen in Chip Ganassi Racing’s return to the IMSA series after a one-year hiatus.

Elliott makes his debut in the Action Express entry that starts from the pole Saturday. His Cadillac team includes full-time IMSA drivers Felipe Nasr and Pipo Derani, as well as veteran Mike Conway, and the trio has been patient in teaching Elliott about sports cars.

Elliott has won four consecutive NASCAR road course races over the last two seasons but insisted it gives him no leverage at the Rolex.

“It’s just a new ball game, something fresh and different and I understand the challenges are great and there’s a lot for me to learn,” Elliott said. “When you show up to somebody else’s playground it is going to be tough — some of the best road course racers in the world are here.”

The top DPi class has seven entries — four Cadillacs, two Acuras and a Mazda — among the field of 50 cars. Last year's race was a Rolex-low 38 entries. Of note:

— Katherine Legge will compete for the first time since breaking both her legs in a crash last summer. She said she's 99% healed after six months of rehabilitation and is teamed for the third consecutive year with Christina Nielsen. They are part of a Porsche 911 GT3R lineup in the loaded 20-car GT Daytona class.

— Zach Veach makes his sports car debut after seven seasons racing Indy cars. He lost his seat at Andretti Autosport late last year and has made the career shift to IMSA, where he's landed a full-time ride with VasserSullivan Racing. Veach will run for the GTD championship in a Lexus RC F GT3 with strong competition from a second VasserSullivan entry piloted by Jack Hawksworth and Aaron Tellitz.

— Wayne Taylor Racing is the two-time defending race winning team and has three overall victories in the last four Rolex races. The team will adjust to its new Acura DPi with Ricky Taylor, Cameron and Rossi, who all drove the car the last three seasons for Team Penske.

— Magnussen has hit a reset on his career after seven winless seasons in F1. He lost his seat with Haas at the end of last season and made the switch to sports cars. Magnussen and van der Zande are the full-time drivers for Ganassi, who has eight Rolex victories — six overall wins and two class wins.

“I think it’s great to be with an organization that is all about winning,” Magnussen said. “The business model of Chip Ganassi Racing is winning — that’s what drives this team and keeps it going and its what keeps this team in existence.”