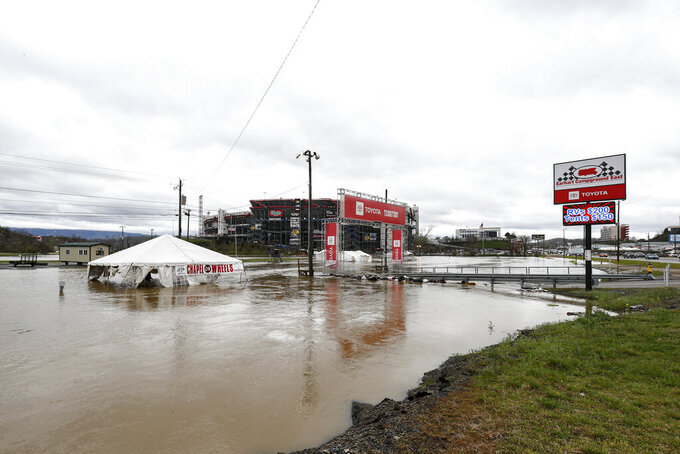 BRISTOL, Tenn. (AP) — Martin Truex Jr. entered the Truck Series race for the first time in 15 years just to get extra laps on the dirt surface at Bristol Motor Speedway.

That reconnaissance mission turned into a runaway victory for Truex, who dominated the Monday afternoon race and then quickly turned his attention to the main event.

NASCAR's first Cup Series race at a dirt track was delayed a day when torrential rain flooded Bristol's parking lots and campgrounds and turned Monday into a doubleheader. Truex was one of seven Cup drivers entered in the trucks' opener in their attempt to learn how to race the surface.

Bristol is a 0.533-mile concrete bullring that was covered in three layers of red Tennessee clay in NASCAR's attempt to add versatility to its schedule. The Truck Series raced seven times on dirt at Eldora Speedway in Ohio but it had been 50 years since NASCAR's elite got down into the mud.

Truex, who ran one Truck Series race in both 2005 and 2006, had almost no dirt experience before Bristol. He led 105 of the 150 laps, won all three stages and beat series regulars Ben Rhodes, Raphael Lessard and Todd Gilliland for the win.

Truex won in a Toyota for Kyle Busch Motorsports and gave the organization its third consecutive win this season.

The converted surface had been a challenge since Friday when a thick dust began to swirl through Bristol's stadium during roughly four hours of practice. Drivers said it clouded their visibility but the bigger problem was the Goodyear tires on the Cup cars.

The tires were fading down to the cords while the weight of the cars seemed to carve deep divots into the dirt track. Rain on Saturday complicated preparations.

The trucks were sent out to start heat races in the slop. Chunks of mud completely covered the windshields and caked the front grilles on the trucks after just one lap and the session was halted. It began to rain again and didn't stop for nearly 24 hours.

All that water soaked into the dirt surface and actually made for better racing conditions. Although the trucks race was slowed by 14 cautions, some of that could be attributed to lack of driver experience on dirt instead of problems with the surface.

As soon as Truex took the checkered flag, the Bristol crew went to work prepping the track for the Cup race.