Valtteri Bottas: "I'm going to beat everyone this year" 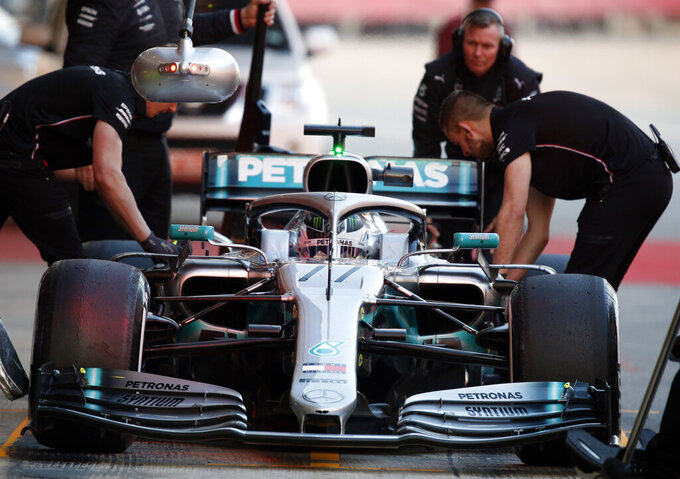 FILE - In this file photo dated Thursday, Feb. 21, 2019, Mechanics prepare Mercedes driver Valtteri Bottas of Finland car during a Formula One pre-season testing session at the Barcelona Catalunya racetrack in Montmelo, outside Barcelona, Spain. Previewing the upcoming 2019 season, for Bottas, even though he didn’t win a single race in 2018, the Finnish driver still believes he can be a genuine challenger for the title this season, even though that will mean challenging his Mercedes teammate Lewis Hamilton. (AP Photo/Joan Monfort, FILE)

TURIN, Italy (AP) — Last season's Formula One campaign was so demoralizing for Valtteri Bottas that he got drunk to forget all about it.

Bottas didn't win a single race in 2018 despite driving for the dominant Mercedes team. But having pressed the reset button over the winter break, the Finnish driver believes he can be a genuine challenger for the F1 title this season.

"I got to Finland, got properly smashed a few times, did anything I wanted to do basically," Bottas said during an event for Mercedes' sponsors in Turin. "Then I got a camera, I started photographing, it's like a new hobby now so sometimes went for a walk somewhere and took pictures.

"I also travelled with my wife and some friends to South America, just for a proper holiday, didn't think about Formula One. When I came back I decided that I'm going to beat everyone this year."

That means going up against Mercedes teammate Lewis Hamilton, who is chasing a sixth world title and a fifth since joining Mercedes in 2013.

"Yes, that is my aim and I feel I can do it," Bottas said when asked if he could be a genuine challenger. "That's the goal but how to get there, that's going to be hard work."

Bottas competed with Hamilton on occasions last season but a mixture of bad luck, tentativeness and team orders saw him finish the year with seven second-place finishes and no wins.

In Baku, a puncture at the end cost him victory , while he failed to launch an attack on Sebastian Vettel for victory in the closing stages of the Bahrain GP. In Germany and Russia, Bottas was forced to follow Hamilton home because his chances of challenging for the title were over.

A somewhat clumsy comment from team boss Toto Wolff describing Bottas as a "sensational wingman " affirmed the widely held view Bottas was effectively No. 2 at Mercedes. It stung Bottas' pride, but he still didn't win.

However, the newly bearded Bottas looks leaner, meaner and keener as he bids to turn his fortunes around.

Last season "was tough, quite tough, but it's over it's done," Bottas said. "It's made me tougher. I feel it's a nice fresh start."

He needs to make a strong start and maintain it, regardless of the pressure that comes with it.

"I've learned that the first half of the season is always very important," said Bottas, who will be 30 in August. "I started the year pretty well, just sometimes lost some points because of different things. I'm ready to go for it and try to be a better me."

The new season starts next Sunday at the Australian Grand Prix in Melbourne. The pressure will be on Bottas and on Mercedes, with Ferrari quicker than Mercedes in pre-season testing .

Bottas needs to perform in order to get a new contract for 2020, or risk losing his seat to Frenchman Esteban Ocon.

"It's not the moment at the beginning of the season to talk about that. He knows that he has our support," Wolff said of the 2020 contracts. "His seat is super safe for 2019 and he knows what he has to do."

Still, it noticeably took Wolff until July of last year to give Bottas a new contract for 2019 .

Hardly an overwhelming show of confidence.