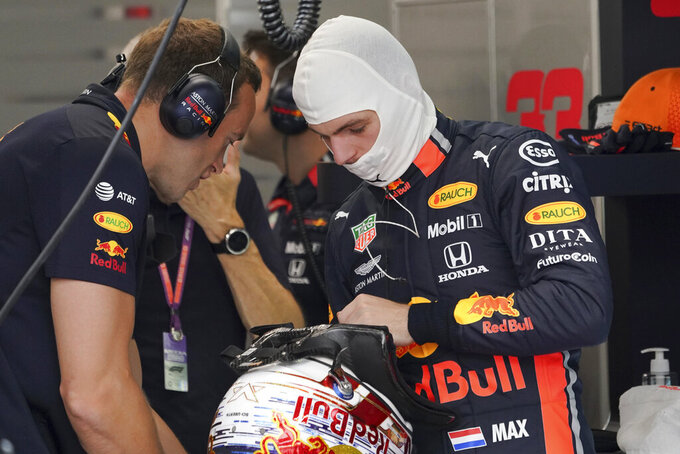 Red Bull driver Max Verstappen of the Netherlands chats with his crew member during the first practice session at the Marina Bay City Circuit ahead of the Singapore Formula One Grand Prix in Singapore, Friday, Sept. 20, 2019. (AP Photo/Vincent Thian)

Mercedes driver Hamilton heads into Sunday's night race with a 63-point lead over teammate Valtteri Bottas, who was fourth fastest.

Bottas hit the wall at the exit of Turn 19, bringing out the red flag with 25 minutes left in the session.

The 5-kilometer (3.1-mile) Marina Bay street circuit is one of the hardest tracks for overtaking in F1, so whoever takes pole on Saturday will have the upper hand. The driver leading the field has won eight times in the past 10 years.

Ferrari's Charles Leclerc, who won the previous two races, had problems shifting gears through Turns 18 and 19. He was able to coast back to the pit lane — where his car was retrieved by Ferrari mechanics — but did not return to the track and finished 19th.