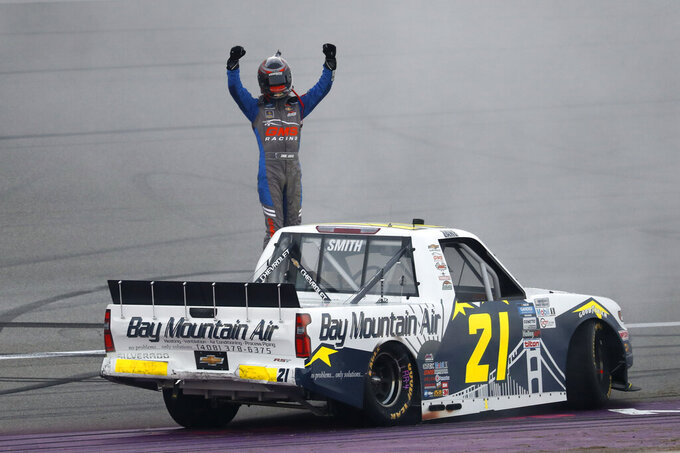 Grant Enfinger tried to win the race as the leader on four previous restarts but a slew of cautions spoiled his race. Enfinger was the leader on the restart in a second two-lap overtime shootout when he surged to the front with a push from Austin Hill.

But he then attempted to block Hill and contact between the two trucks caused Enfinger to spin. Christian Eckes moved into the lead with a lap to go and tried to win his first career race when Smith passed him for the win.

The victory for Smith, a 20-year-old in his first season at NASCAR's national level, locked the California native into the Truck Series playoffs. Five spots remain up for grabs, with former series champion Johnny Sauter below the cutline following a crash with teammate Enfinger with 16 laps remaining.

“I don't even know where to start,” said Smith, who choked back tears after taking the checkered flag. “A lot of people don't understand my situation with racing ... a lot of this sport, as we all know, is money and I don't come from that. To make it to this point and win and be with such an awesome team is something special.”

Enfinger dropped to 33rd after trying to win despite four cautions over the final 16 laps.

The race was stopped by 11 cautions, including a red flag of nearly 10 minutes to clean oil off the track for a crash in the first overtime attempt.

One of the cautions was when Sauter and Enfinger were racing for the lead, with Sauter sliding to the front at the start/finish line. But as the two trucks raced side-by-side, the teammates touched and Sauter spun.

Sauter hit the wall and heavily damaged his Ford, ruining his shot at a victory that would have locked him into the playoffs. Sauter, the 2016 Truck Series champion, is winless through 11 races this season.

“I thought I was doing it right. I guess not. I just lost it,” Sauter said over his radio.